In the aftermath of the Gaza war, with a strengthened Hamas and little hope of change from the Israeli government, the West Bank Palestinian leadership considers either working toward a transitory agreement with Israel or taking the UN route, with the backing of the European Union. 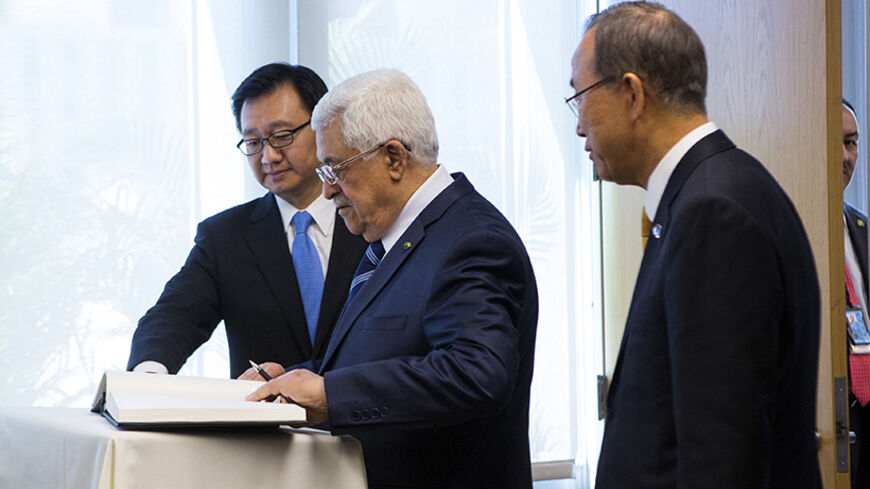 West Bank leaders, who had been my Palestinian partners during the Oslo process, express grave concern with the ramifications of the Gaza war. They told Al-Monitor that they foresee a growing radicalization in Palestinian public opinion, leaving little support for a negotiated solution. Hamas, in their view, will be strengthened politically, especially in the West Bank. Resistance is becoming more popular than negotiations. These Palestinian leaders, still part of the decision-making process, are deeply worried about the outbreak of Hamas-inspired violence in the West Bank. In their view, that would risk any possibility of a foreseeable negotiated settlement, and would turn the Israeli-Palestinian equation back to the era of perpetual violence.

This unprecedented concern also has a silver lining. The most burning issue in the eyes of these pragmatic Ramallah circles is how to orchestrate the arrangements for the future of Gaza as an integral part of broader Palestinian-Israeli conflict resolution. While the term "interim agreement" is an expletive to all Fatah leadership, they concede that a full permanent status agreement is out of the question at this time. The path to immediate statehood is now of greater urgency.

These Oslo strategists think of a new configuration that would strengthen Fatah in the West Bank and Gaza through a transitory arrangement — to avoid mentioning the word "interim." Such a transitory agreement has to be based on US guarantees on the future border — based on the 1967 lines with minor, mutual and parallel land swaps — and East Jerusalem as the Palestinian capital, along the lines of the Arab Peace Initiative.

With such a written guarantee, a transitory agreement would lead to the establishment of a Palestinian state — with temporary borders and on 80% of the West Bank. The settlements would stay in place, but without any expansion. The freeze is an essential condition. Security arrangements in the Jordan Valley could still be along the lines of the Israeli plans. The issues of the final border, Jerusalem and the refugees would be postponed according to an agreed-upon timeline.

The new transitory agreement would also be relevant to Gaza. As the basis of such an arrangement is the Oslo Accord (mainly the security annex, which is still to a large degree in place for the West Bank) — it must include four foundations: a gradual movement to statehood; consideration of the West Bank and Gaza as a single territorial unit; security; and economic development. In terms of Gaza, it would mean one government for the two territories, an active role for the presidential security units at all border crossings, demilitarization — as called for in the Oslo Accord — and economic development, also managed by Ramallah.

Other Palestinian officials prefer to pass the conflict's resolution to the United Nations. These officials, who are close to Palestinian President Mahmoud Abbas, also see this process as gradual. They know that the United States will not allow for the recognition of full member-state status this year; they foresee growing international support for formal recognition in the aftermath of the Gaza war, including by the European Union. They are aiming for an intense, one-year diplomatic campaign to isolate the United States and Israel. Part of the campaign would be joining all UN specialized agencies as well as the International Criminal Court in The Hague.

In both scenarios, the Ramallah officials intend to involve the pragmatic anti-Hamas axis of Egypt, Jordan and Saudi Arabia. It is unknown where Abbas stands on peace process activism versus UN activism, but it is clear also to him that in the aftermath of the Gaza war, the status quo is untenable.

Israel, post-Gaza war, will stand at a crossroads between either working with Abbas and his Arab partners in both the West Bank and Gaza, or working against him. Officials in Jerusalem say that there is nothing new in the corridors of power. Prime Minister Benjamin Netanyahu, post-Gaza, will launch an effective propaganda campaign to prove his success as a measured and forceful leader in war, and to promise Israelis a continued hold on the West Bank, with stringent security arrangements and settlement construction. His interim solution is to be re-elected in early elections in 2015.

In Washington, there is a growing understanding for Abbas' predicament. Diplomats in the region who spoke to him found him in a gloomy mood; between his opposition to a violent uprising and the failure of the peace process, the Palestinian president is left with little hope. For the administration, the immediate issues of concern are the Gaza arrangements, through which Abbas should find a renewed role in the Gaza Strip. His presidential forces should be deployed at the border crossings, especially in Rafah. Together with Germany, the United Kingdom and France, the United States is also coordinating an international donor meeting in September, possibly in Oslo, in which the Abbas-led technocratic government should be the aid recipient for Gaza reconstruction.

As to the plans for the renewal of the peace process, Washington is more lukewarm. While it is perceived as a necessity for regional stabilization, the hopes of such a process succeeding are considered very low — in the words of US officials, this is due more to the composition of the Israeli government than the Palestinian one.

The ideas about transitory arrangements for the West Bank and Gaza raised by Palestinian peace process strategists are known and appreciated in Washington, but they will have to wait at least until the midterm elections, if not until Israeli elections.