The UN General Assembly speech by Palestinian President Mahmoud Abbas reflects first and foremost the Palestinians' despair of any hope for peace with the current Israeli leadership. 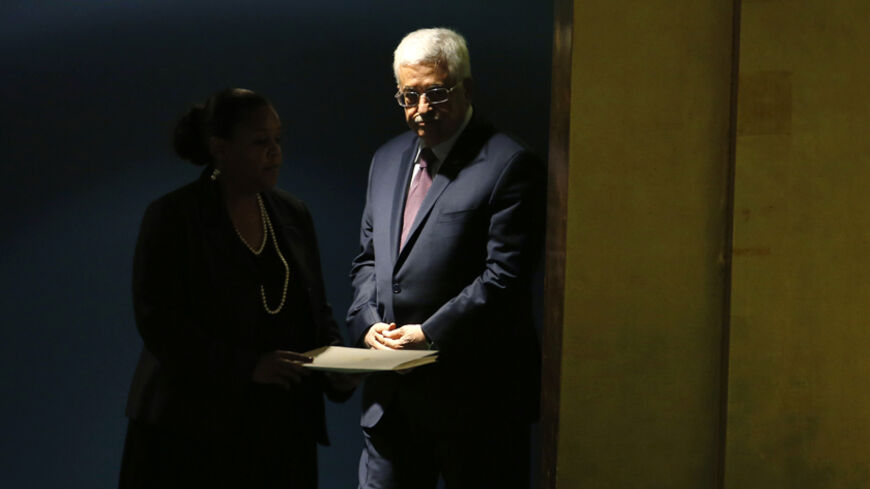 Palestinian President Mahmoud Abbas is escorted to the podium for his address to the 69th UN General Assembly at United Nations Headquarters in New York, Sept. 26, 2014. - REUTERS/Mike Segar

The Sept. 26 speech delivered by Palestinian President Mahmoud Abbas to the UN General Assembly was harsh, annoying and even depressing. Most worrying of all, however, the Palestinian leader, who was present at the birth of the Oslo Accord in 1993, appears to have decided to break all the rules. The assertion that “we will not forget, and we will not forgive,” which he proclaimed in the context of Israel’s activities in Gaza, was the warning siren for an impending earthquake.

Abbas is no political novice. One could assume he knew that accusing Israel of genocide would be gratifying to the ears of Prime Minister Benjamin Netanyahu, who did indeed describe the speech as “inciteful.” It stands to reason that the Palestinian leader knew his speech would provide fodder for Foreign Minister Avigdor Liberman, who was quick to declare the entire Palestinian leadership “recalcitrant.” The veteran Palestinian statesman was also surely not surprised by the public rebuke of the US State Department, whose spokeswoman said the speech did not contribute to advancing the peace process between Israel and the Palestinians. The main problem — and this should be the first and foremost concern of every Israeli and anyone else who cherishes Israel's character as a Jewish and democratic state — is that the Palestinian leader does not really care what the leaders in Jerusalem say and what the US administration thinks of him.

An Israeli source who visited Abbas' headquarters in Ramallah in late September was not surprised by the content of his speech, not even its harsh tone. The visitor, who has maintained a long-term relationship with the Palestinian Authority (PA) leadership, got the impression from talking discreetly to Abbas and his close aides that they had lost all remaining hope that negotiations with Netanyahu would bring the Palestinians closer to a two-state solution based on the 1967 borders. Abbas is also not deluding himself that on the eve of the Nov. 4 congressional elections, President Barack Obama will back a UN Security Council resolution recognizing a Palestinian state, thereby turning Israel into a country occupying the land of a UN member state.

Instead of strengthening the standing of the PA by taking advantage of the weakness of Hamas, which is licking the wounds it sustained in Operation Protective Edge, Israel chose to humiliate the PA by expropriating some 4,000 dunams (almost 1,000 acres) of land on the outskirts of Bethlehem. The Palestinian leadership in Ramallah has given up on the lame Israeli peace camp headed by Justice Minister Tzipi Livni and opposition leader Isaac Herzog.

Until further notice, should it ever come, the hollow term “peace process” is best deleted from the political lexicon and replaced by the worrisome term “confrontation process.” This process, as Abbas keeps pointing out to his Israeli and European visitors, including my source, will likely be inaugurated by petitioning the International Criminal Court in The Hague against the State of Israel and high-ranking political and military officials for construction of the settlements and violation of the Palestinians' human and property rights. The Palestinians assume that Israel will react harshly to such a move, as it did in response to the establishment of the unity government with Hamas in April. Ramallah’s next move in the planned confrontation process will be to reduce its ties with Israel, including minimizing security cooperation.

Nonetheless, the mechanism of the PA, which provides tens of thousands of jobs and attracts funds from donor countries, will continue to exist. Not only that, but according to the agreement reached with Hamas' leadership Sept. 25, it will pay the salaries of Hamas officials employed in government offices in Gaza. Al-Monitor has learned from a senior Israeli official that on the eve of Operation Protective Edge, Israeli defense officials warned Netanyahu that continuing to hermetically seal off the flow of funds to pay wages in Gaza was a recipe for a violent explosion. Those same officials warn that an Israeli attempt to derail the agreement on handing over the Gaza border crossings to the Hamas-Fatah government could result in renewed rocket fire in the south and its spread to the eastern front.

Netanyahu feels far more comfortable in a confrontation process than a peace process. With the whole world quaking at the images of Islamic State (IS) murderers beheading journalists, who cares about the Israeli occupation and the settlement enterprise? The Saudi initiative “was set up in another period: before the rise of Hamas; before Hamas took over Gaza; before [IS] took over chunks of Syria and Iraq,” Netanyahu told The Jerusalem Post when asked whether he would accept the plan, which offers Israel peace in return for relinquishing territories it occupies. What is needed now, said Netanyahu, is ''to create the equation between our battle against Hamas, and the West’s battle against [IS].” He is convinced that if the West keeps fighting against IS, more people will understand the threat that Israel faces, and the stinging international criticism against it will subside.

Let's assume Netanyahu is right, and Hamas’ crimes in the West Bank and Gaza are identical to those of IS in Iraq and Syria. What does that comparison have to do with the international criticism of Israel’s control over millions of politically disenfranchised Arabs and the expropriation of their lands? The Israeli-Palestinian conflict and occupation of the territories were born many years before the threat of IS emerged and before the Muslim terrorists conquered land in the region. After the Western-Arab coalition wipes out IS leader Abu Bakr al-Baghdadi, the Israeli-Palestinian conflict will no more disappear than it did after the US-led coalition helped put an end to the life of Iraqi dictator Saddam Hussein with the second Gulf War.

Mahmoud Abbas will turn 80 in six months, on March 26. We may be witnessing the last call by a Palestinian leader from the podium of the UN General Assembly to save the peace. Let’s hope we don’t miss him.