The Kurdish position in internal Iraqi politics has been weakened by the fight with the Islamic State, resulting in a new Iraqi government that largely ignores their demands. 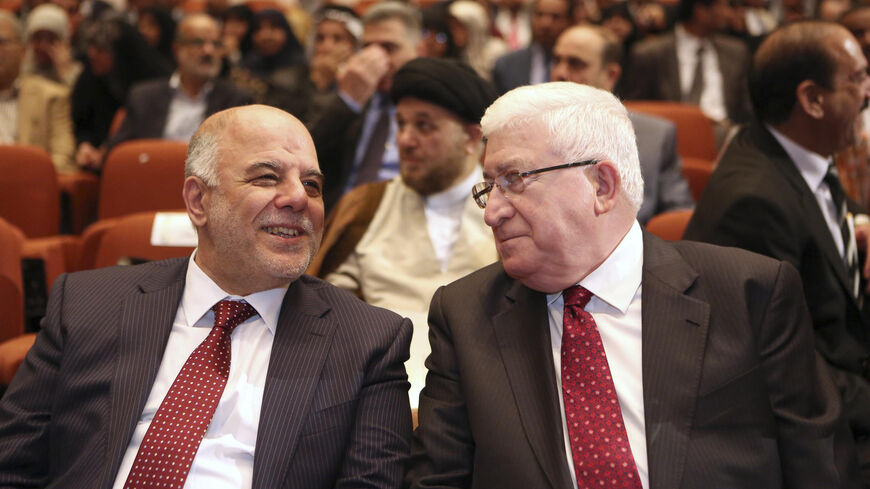 ERBIL, Iraq — Iraqi Kurds appear to have decided to participate in Iraqi Prime Minister Haider al-Abadi’s government as a result of strong international pressure and amid the serious challenges they face from the Islamic State (IS).

Nearly a month of negotiations between Kurdish delegations and Abadi produced no concrete agreement between the two sides. After a backlash in the ranks of the Shiite-dominated Iraqi National Alliance against former Prime Minister Nouri al-Maliki, Abadi managed to secure the support of the majority of the parliament members in the alliance on Aug. 11 and was assigned on the same day by President Fouad Massoum, a Kurd, to form a cabinet within a month.

Given the tumultuous state of affairs in the country, the Kurds expected the new Shiite prime minister to adopt a more lenient attitude toward them after eight years of often tense relations with former Prime Minister Maliki. But that did not happen. Abadi sent signals that he did not care much about Kurdish participation, as he had secured the support of Sunni Arab politicians, who were voted into the Iraqi parliament in April and before IS took over most of the Sunni parts of the country.

“The Kurdish decision to participate in the Iraqi government was a half-hearted one,” said Renas Jano, an Iraqi lawmaker from the Kurdistan Democratic Party (KDP), which has the largest Kurdish bloc in the Iraqi parliament. He told Al-Monitor, “We were hesitant right through the last moment.”

Kurds say their participation in Abadi’s government is “conditional” and have set a three-month ultimatum for Abadi to meet their conditions.

Key Kurdish demands to Baghdad include unfreezing the Kurdish government’s budget, which has been frozen since February; settling disagreements over oil exports; arming and funding Kurdish armed forces, known as the peshmerga; implementing constitutional Article 140 regarding the ultimate status of territories claimed by both Kurds and Baghdad; and granting full power to the Kurds over their airspace for civilian aviation.

“If within three months we do not see a commitment to the conditions, Kurdistan’s political leadership will make an appropriate decision,” read a joint statement from Kurdish blocs in the Iraqi parliament.

A document signed by various Iraqi groups in Abadi’s national unity government sets a one-year deadline to “generate suitable solutions” for territorial disputes between Kurds and Baghdad, a one-month period to deliver a budget installment to Kurdistan and a six-month deadline to pass legislation on regulating the country’s oil and gas sector. But it is not clear if Abadi will have any legal obligations to abide by the provisions in the agreement.

The war between Kurdish peshmerga and IS jihadists has stretched Kurdish forces thin. The Kurds have come to rely on assistance from other countries, notably the United States and Iran, as well as support from the government in Baghdad. This has placed them in a weaker position vis-a-vis the Iraqi government compared to previous years.

In what many in Iraqi Kurdistan saw as a clear show of disregard for the Kurdish role and weight in Iraqi politics, Abadi presented the names of his Cabinet members to the parliament for approval during the late hours of Sept. 8, even though Kurdish groups were still holding a key last-minute meeting in Sulaimaniyah to discuss whether they should join the new Cabinet.

The Kurds boycotted the session for around half an hour and only joined after they were told to do so by political leaders in Kurdistan.

“Four years ago, Shiites, Sunnis, the United States, Iran and the United Nations would come to Erbil, the Kurdistan Region’s capital, asking Kurds to take the initiative to form the Iraqi government,” said Barham Salih, a senior Kurdish politician and former contender for the office of Iraq’s presidency, in a Sept. 9 Facebook post. “But yesterday, the Iraqi Parliament’s session to approve the cabinet of Dr. Haider al-Abadi kicked off without the presence of Kurdish representatives and without waiting for a response from the Kurdish political leadership, who were still in a meeting at the time of the session and had not made their final decision whether to join the new Iraqi government.”

Iraq’s previous government was formed in a 2010 Kurdish-brokered deal in Erbil following a broad meeting of Iraqi groups.

The failure to reach an agreement with Abadi this time around prompted a final daylong round of intense talks between various Kurdish groups on Sept. 8 to hammer out a final position on whether to take part in Abadi’s broad-based Cabinet.

The Kurdish delegations were also visited by Brett McGurk, a senior US State Department official handling Iraq and Iran affairs, and Nikolay Mladenov, the UN’s envoy in Iraq. Some Kurdish officials say that the Kurds' decision to join the government appears to have emerged under intense pressure from the United States, the UN and the Kurds' powerful eastern neighbor, Iran, to forge a united Iraqi front in the fight against IS.

“We essentially reached an agreement with the US and UN and not the Iraqi government,” said parliament member Jano. “Negotiations with Baghdad did not generate any results.”

The ultimate decision to join the Baghdad government hardly seems to have pleased Kurdish lawmakers, as they have lashed out at the deal one after another.

“It was a big failure,” said Muthana Amin, a parliamentarian from the Kurdistan Islamic Union, which holds four seats in parliament. “This was a government formed on the basis of an alliance between the Shiites and Sunnis, and none of the Kurdish demands were accepted.” He said he voted for Abadi’s government reluctantly and only out of respect for the broad consensus among Kurdish groups to do so. Amin criticized Kurdish leaders for deciding to join the government in that manner and said waiting a couple of weeks would have strengthened the Kurdish position.

Kurds warn that the price of failure might be too high.

“If Abadi and us could agree upon a reformed platform and could improve governance, then it would serve all sides,” said Arez Abdullah, an Iraqi lawmaker and a member of the Leadership Council of the Patriotic Union of Kurdistan, the party to which Massoum belongs. “Iraq is at an intersection. Either its problems need to be fundamentally resolved or Iraq will move in an undesirable direction … and the situation will get even worse.”