The security developments triggered by the Islamic State in Kirkuk have superseded talk about the annexation of the city to Iraqi Kurdistan. 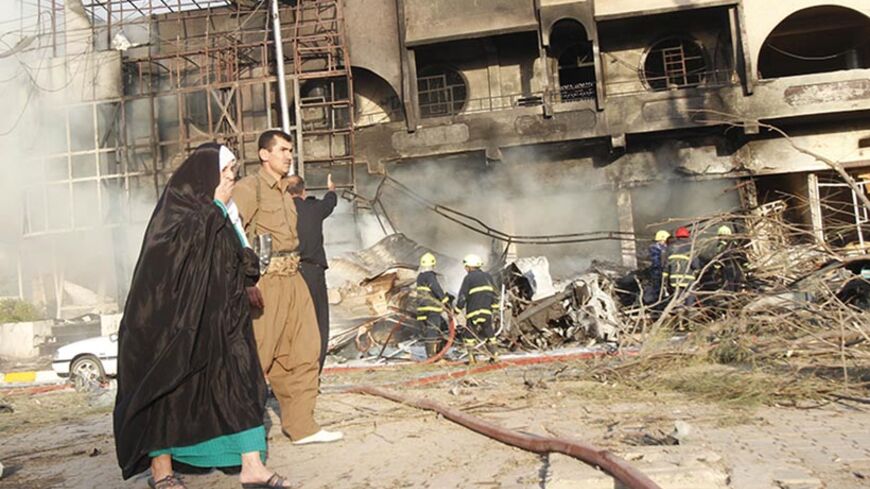 A woman reacts as she walks past the scene of a car bomb attack in Kirkuk, Aug. 23, 2014. - REUTERS/Ako Rasheed

One cannot assume that Iraqi positions on the future of oil-rich Kirkuk — a city that includes various nationalist, religious and sectarian minorities — have changed as a result of the turn of events set in motion by the fateful challenges presented by the Islamic State (IS). In the face of IS, the issue of Kirkuk and the disputed territories have become secondary.

The crisis that began with IS' occupation of Mosul and its later advance toward Salahuddin, Anbar and eastern and southern parts of Kirkuk — as well as its spread to Diyala and southern Baghdad — have tested all Iraqi parties. The residents and political leaders of Kirkuk are focused on concerns that are more important and more dangerous than talk of whether the city joins Iraqi Kurdistan or remains under the central government.

On June 10, IS occupied a number of Kirkuk districts, including the town of Hawija and the Riyadh district, both in the southeastern part of the city and populated by an Arab majority. The organization also took control of villages and towns populated by Turkmen majorities in Kirkuk's south, before an advance of Kurdish peshmerga succeeded in stopping its expansion to other areas.

A few days later it became clear that the theory that Kirkuk's Arabs would stand with IS — by virtue of their conflict with the Kurds and Turkmen over control of the city — had been proved wrong. The Naqshbandi Army, which sees the area as one of its traditional regions of influence, joined the fight against IS.

At that time, talk of the city's future stopped in light of events, until Massoud Barzani, president of the Kurdistan Regional Government, on June 30 called for a referendum on the annexation of Kirkuk, sparking angry reactions in the Iraqi capital. Ultimately, however, Barzani's statement was also put on the back burner, after IS sparked a larger confrontation with the peshmerga on the Ninevah plains and threatened Erbil, prompting US and international military intervention.

After that, the convulsive rhetoric between Baghdad and Erbil changed. The different tone coincided with the appointment of Haider al-Abadi as prime minister-designate, and military cooperation between the peshmerga and Iraqi forces. This cooperation resulted in advances on a number of fronts, and in particular, led to taking control of the town of Amerli, south of Kirkuk, and then moving to open the Kirkuk-Baghdad highway.

Najat Hussein, a Turkman member of the Kirkuk Provincial Council, told Al-Monitor, "Kirkuk will remain immune to IS." He praised cooperation among the peshmerga, Iraqi government troops and regiments of volunteers and militias, which collectively liberated Amerli. "The peshmerga took the place of the Iraqi army, which had previously withdrawn from its positions. We, the Kurdish and Turkmen residents of Kirkuk, stand behind these forces, which preserved the lives of all the province's constituents. [The peshmerga's] presence is normal, as they are Iraqi forces, even though the majority are Kurdish. Whether or not these forces remain depends on the circumstances."

He said, "There is now cooperation between the army and the peshmerga, and we, as Turkmen, consider them 'two wings of the same bird' — neither can be dispensed with. There have been previous attempts to drive a wedge between the two, but they failed."

On the future of the city, Hussein said, "The Kurds want to quickly declare their annexation of it to the [Iraqi Kurdistan] Region, but the regional and international situations do not allow one party to impose its opinion without consulting the other. The Kurds must be patient and continue with the method of negotiations and understandings, both with the government in Baghdad and with the people of the province. Its fate is in their hands."

Although the Turkmen prefer for Kirkuk to be an autonomous region, they, too, have viewed the picture from a different angle today with IS in the picture. According to Hussein, "The best solution is for Kirkuk to be an autonomous region. Given that Kurds comprise a majority, they would have an upper hand in the administration, alongside the Arabs and Turkmen, for at least around 10 years. Later on, the issue of its fate could be raised again. Yet, currently the situation of Kirkuk is very sensitive, so we can't discuss the issue. The enemy is just 15 kilometers [9 miles] from the city center, and any mistake or misunderstanding would mean no Kirkuk or its fate to discuss."

Mohammed Kamal Saleh, a Kurdish member of the Kirkuk Provincial Council, spoke to Al-Monitor about the fateful necessities that have taken precedence over politics. "After June 10, the equations in the country changed in general. If not for the peshmerga, which was sent to Kirkuk to repel IS, Kirkuk would have ended up like Mosul and Tikrit. Thus, Kirkuk is safe thanks to the peshmerga. We are now in the process of implementing Article 140 of the constitution. Many years have gone by without it being applied. It was supposed to be finished in late 2007. The first part of the article, which involves compensation for those who sustained damages, has been completed. But now the referendum stage must be implemented. The situation is ready, and the decision is in the hands of residents," Saleh said.

"When IS militants approached Kirkuk, the native Turkmen, Arabs and Kurds all requested that the peshmerga come [to help], considering it a part of the Iraqi defense apparatus. This was to avoid the fate that befell Mosul and Tikrit," Saleh said.

When asked whether the Kurds can proceed in deciding the fate of Kirkuk unilaterally, without Baghdad, Saleh did not respond. The current reality and signs from the talks over formation of an Abadi government indicate that the fate of Kirkuk will only be determined according to cooperation on the basis of Article 140, that is, a referendum.

A source from the Shiite National Alliance confirmed that the negotiations for a new government include understandings concerning the fate of Kirkuk and the disputed territories. This points to the issue returning to talks between Baghdad and Erbil. Inside Kirkuk, the city's Arabs seem more receptive than ever to settling the issue politically, especially given that in the past they had rejected applying Article 140, which they considered illegal.

None of the Kirkuk Arab politicians who spoke to Al-Monitor touched on the issue of the city's fate, the magnitude of the current crises superseding specifying a position on Article 140. Mohammed Khalil al-Jubouri, head of the Arab group in the Kirkuk Provincial Council, issued a statement Aug. 29 calling for the formation of a special force that would include the city's minorities to expel IS from Kirkuk's eastern and southern regions. "The Arab tribes of Hawija and al-Dibs confirmed their opposition to the organization [led by Abu Bakr] al-Baghdadi. They formed forces to fight it, and must be aided and supported militarily and logistically," he said.

One Arab politician who spoke on condition of anonymity told Al-Monitor, "Prominent Arab figures from Kirkuk, such as the al-Assi family, which includes a number of officials in the local government and administrative and security centers in Kirkuk, were expelled from the town of Hawija at the hands of IS. Furthermore, top [Arab] leaders are present today, hosted by Kurdish officials in Sulaimaniyah and Erbil."

The challenge represented by IS will be reflected in the way Kirkuk is dealt with in the future. The Kurds, Arabs and Turkmen cannot move ahead with unilateral solutions for the city's future. City residents who spoke to Al-Monitor repeated the same sentence, which has been absent from the political debates for the past 10 years: "The fate of Kirkuk will only be decided by the people of Kirkuk."