Military intervention against the Islamic State must be swift, decisive and relentless to stop the organization in its tracks. 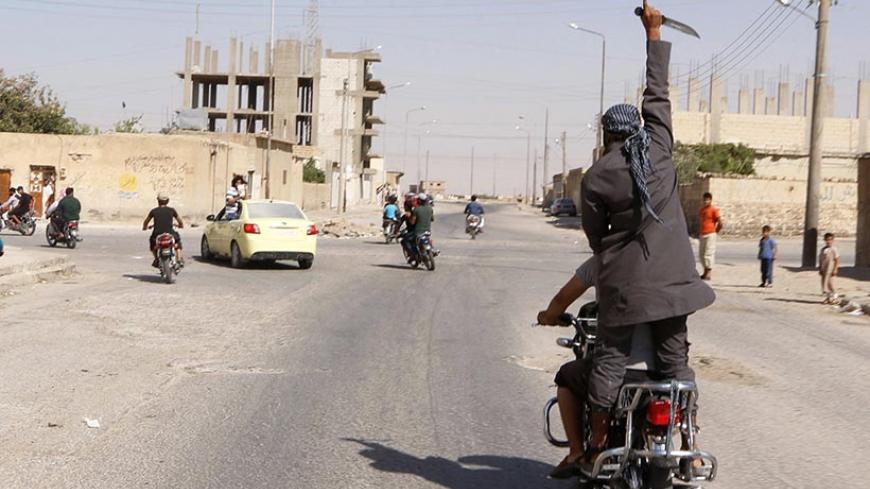 A man brandishes a knife after Islamic State militants took over Tabqa air base, Aug. 24, 2014. - REUTERS 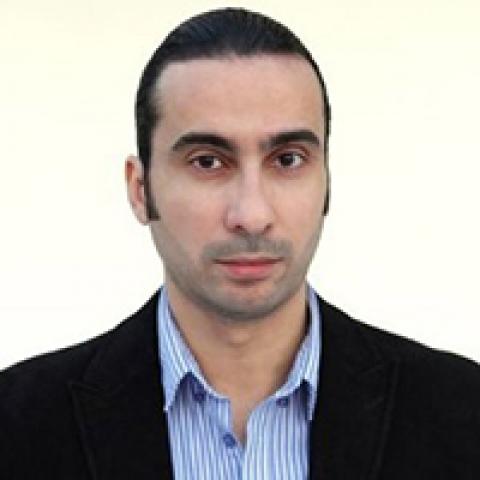 For more than three years, the Islamic State in Iraq and al-Sham (ISIS), now the Islamic State (IS), has wreaked havoc in Syria and more recently in Iraq, butchering its way from the outskirts of Aleppo all the way to Nineveh, Anbar and Salaheddin, almost to the environs of Baghdad. The time has come to reverse the tide against this monstrous organization and scatter its ruthless fighters in disarray. Instead of it freely embarking on an unstoppable hunt, IS should be haunted by the specter of swift, decisive, and catastrophic international intervention. The cycle of death must be reversed. It is a moral duty to destroy this inhumane beast.

ISIS dominated the chaotic Syria scene after its daring raid on Iraq's Abu Ghraib prison on July 21, 2013, when the group freed some 500 jihadists from the notorious facility, including dozens of senior leaders and operatives. Since then, its fighters have engaged in a horrific game of one-upmanship, as foreign fighters from Europe, Asia, the Caucasus, North Africa, the Gulf and other Middle Eastern countries seek to outdo each other with acts of shocking violence and gore. The atrocities have multiplied exponentially over the past two months, particularly in the aftermath of the June 10 takeover of Mosul.

Demoralized by swift IS gains and gruesome mass executions of soldiers and residents, the Iraqi security apparatus crumbled. IS's sectarian strategy bore some fruit, as the ostensibly secular Iraqi army began partnering with Shiite militias, reifying Sunni Iraqi fears of an overtly Shiite state apparatus. Contrast the image of demoralized Iraqi soldiers fleeing Mosul before the invasion with the gleeful, victorious scenes of drive-by shootings and executions by IS fighters in their propaganda videos.

As incompetent as they may have been, Iraq's armed forces received a moral boost when US President Barack Obama authorized air strikes against IS in northern Iraq, coupled with hurried Russian and Iranian decisions to equip the Iraqi air force with fighter jets. In addition, former Prime Minister Nouri al-Maliki's willingness to seek help from experienced and battle-hardened Shiite militias, such as Asa'ib Ahl al-Haq, not only relieved the army but also proved efficient. To date, the only notable anti-IS military success was recorded days ago, in late August, by Asai'b, when its fighters managed to break the IS siege on Amerli, together with the Iraqi army and Kurdish peshmerga forces.

From "liberation" to nightmare

Contrary to propagandistic reports of Mosul residents overwhelmingly welcoming IS fighters, the ill-advised actions and conduct of the Islamic State have in fact prompted bitterness and dissent among the societies where it operates. There is a limit to what local tribes or city dwellers can tolerate as a necessary evil.

As soon as IS took control of Mosul, it demanded that local families present and offer their daughters as brides for jihadist fighters. This did not bode well for residents. On top of that, among the first of IS' victims in Mosul was Muhammad al-Mansuri, the imam of the grand Nour al-Din Mosque. He was executed on June 12 for denying the religious legality of Abu Bakr al-Baghdadi's proclaimed caliphate. Two days later, 12 other Sunni clerics were executed. A few weeks later, Mahmoud al-Asali, a Muslim professor at Mosul University, would be killed by Baghdadi's henchmen because he objected to the group's ultimatum to the city's Christian inhabitants to convert or face death. Many Sunnis who may have otherwise remained neutral were swayed to oppose IS after it engaged in a Taliban-style campaign of destruction, demolishing ancient heritage sites and religious shrines.

Diminishing the influence of large Sunni tribes and marginalizing their leaders worked for a while, before things turned upside down as IS repeatedly humiliated and degraded notable and elderly tribesmen. Bloodshed is not anathema to Iraq's Sunni tribal politics, but the influx of bloodthirsty foreign fighters threatens the very foundations of tribal societies. Narratives have emerged of IS militants brutalizing and abusing local communities. Reports of IS fighters claiming women as wives or sex slaves have sparked a fierce reaction among tribal communities. No matter how much they might hate the Shiite-led government, the Sunni tribes are beginning to turn against IS. The group's gruesome killings appeal to the numerous foreign and local psychopaths within IS, but those subjected to IS rule are growing increasingly sick of such excessive and monstrous practices.

By alienating a sizable portion of Iraqi Sunnis, IS is indirectly making way for the effective facilitation of a coalition of forces. Its trespasses and atrocities against the Sunnis, among others, open a window of opportunity for Western governments, Syria and Iran and other regional powers to stop the group in its tracks. The lessons of Syria still hold true: Infighting and defections among opposition militias are the inevitable result of a stalemated war and are amplified by different agendas and priorities, ideologies, loyalties, sponsorship, interests and so on. Those who formerly cheered for IS and have tasted its rule are now looking for an exit route. Their path to escape will open up if a relentless, wide-scale air and ground military campaign materializes.

The Islamic State's political doctrine is not the only source of tension. From a security perspective, IS committed a terrible mistake by sending its hordes of fighters to take Erbil and Kirkuk, raising a red flag in regard to Western interests and investments. This, together with directly engaging Kurdish forces, might turn out to be the straw that broke the camel's back, signaling the end of IS’s rapid successes and portending its inevitable decline.

IS's unsustainable and criminal modus operandi, combined with this strategic error, has left it overextended. Its slaughter and forced exodus of Yazidi and Christian communities and massacres of Shiites attracted widespread attention. The international community finally began to focus on the group. Taking on all sides simultaneously has brought about the demise of far more formidable forces in history.

IS has no friends anymore. Its former sponsors are shelling out billions of dollars to see it degraded. Its former allies — Jabhat al-Nusra in most of Syria (except the Qalamoun border area with Lebanon), what is left of the so-called Free Syrian Army, major Sunni tribes in eastern Syria and Iraq's Anbar province, Jaysh al-Naqshbandi, the General Military Council for Iraqi Revolutionaries and others — are turning against it.

There is no doubt that an international coalition is beginning to take shape, galvanizing the global outrage resulting from videotaped decapitations. Beheadings of Western journalists are proving counterproductive for IS, as instead of curbing US airstrikes and preventing broader military intervention, they seem to have motivated IS's adversaries to launch a determined campaign against it. Statements by Western as well as Middle Eastern decision-makers amid an unequivocal Russian stance point to broad-based opposition to the group.

In particular, US and UK leaders have been unusually urgent and hawkish. They are clearly prepping the public for renewed military intervention, although the deployment of ground troops has not yet been proffered. Careful use of Special Forces can solve this sensitive issue and accomplish more with fewer boots on the ground. If the United States does commit to ground fighting, it may be for the first-ever all-Special Forces war. What might negate the need for a large deployment of forces in the war zone, however, is close coordination between the United States or a UN-led coalition and troops from both Iraq and Syria, who could be chiefly tasked with battling IS forces fleeing or scattered due to intense air strikes.

If the new Iraqi cabinet manages to resolve previous disagreements with the Sunni Sahawat (Awakening Councils), granting them their demand to permanently incorporate some 60,000 of their tribal fighters and individuals into the armed forces and other government posts, then IS would find itelf confronting a challenge too big for its organization and operational capacities to withstand. IS is especially vulnerable given that its forces are thinly spread over a vast territory.

The Islamic State recently shifted tactics in northern Iraq and began using smaller units in an attempt to evade US air strikes and Kurdish forces. This is already a success for its opponents. How so? Forcing IS to fight in smaller units deprives it of the ability to attack and overrun cities, operations requiring sizeable forces. It is true that smaller units enjoy greater maneuverability, but that could be mitigated by the deployment of Iraqi and allied Special Forces who can locate, ambush and target IS vehicles and personnel. SIGINT (signals intelligence) would have a major role to play in providing real-time, detailed intelligence. Enhanced coordination would significantly reinforce the prospects of the campaign, which should not be restricted by a predetermined time frame.

There is a real opportunity to defeat IS on both ends of the territory it has carved out for itself. Turkey should be forced to seal its borders in both directions and stop serving as a gateway for foreign jihadists and a base for every radical and anti-Bashar al-Assad faction. IS commanders and militants should be bombed relentlessly, and the destruction that befalls them should be of irremediable dimensions. They must taste the same shock and fear that they strike in the hearts of their opponents. Only then will IS operatives reach the point of feeling that "God" is no longer on their side.

IS will continue to rain terror here and there since its ideology will survive, however weakened and fractured. Yet one thing is for certain: It will no longer be able to make such astonishing advancements and occupy pivotal cities as before. Isolated targets will be vulnerable and prone to falling, but that is where it ends for ISIS in terms of tactical successes when compared to the strategic gains witnessed over the last few months.