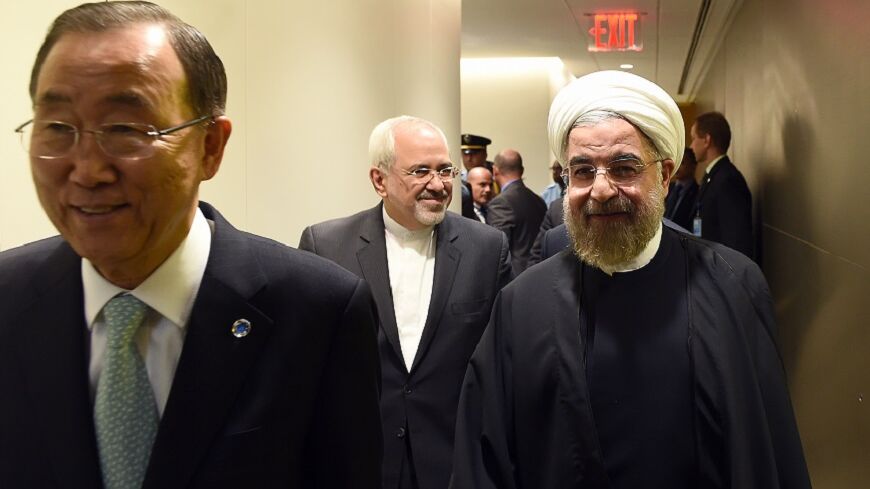 NEW YORK — Iranian President Hassan Rouhani spoke to an elite group of former US cabinet members and senior officials at an off-the-record dinner the night of Sept. 23. Among the guests were three former US national security advisers, Sandy Berger, Brent Scowcroft and Steve Hadley; former US Secretary of State Madeleine Albright; former US special envoy to Afghanistan James Dobbins; and scholar Vali Nasr, sources at the dinner told Al-Monitor.

If the atmosphere at a similar dinner held with the then-newly inaugurated Rouhani last year “was full of hope and excitement and the sense of history being made,” this year’s dinner was “more businesslike and normal,” one guest, speaking not for attribution, told Al-Monitor. “That is one thing. US-Iran relations, this is becoming more normalized.”

Rouhani told the audience, in answer to a question, that he would like to reach a nuclear deal by October, so that the complicated technical details could be worked out by the Nov. 24 extended deadline that Iran and the five permanent members of the UN Security Council plus Germany (P5+1) have set for themselves, the dinner attendee said.

There was nothing very surprising in Rouhani’s generally upbeat but vague remarks about prospects for possible US-Iranian bilateral discussions and possible Iranian cooperation on issues of mutual concern, such as combating jihadi militants with the Islamic State group, another attendee said.

But while Rouhani did not at the dinner repeat Iranian officials’ frequent charge that the P5+1 and US demands for the terms of a final Iran nuclear deal are unreasonable, former US and international officials said that Iranian negotiators in New York had not shown new flexibility on key stumbling blocks to a deal.

Despite discussion of different possible compromise formulas by the P5+1 and Iran in New York, no real progress or breakthrough has been made in overcoming the central obstacle to a nuclear deal: the size of Iran’s enrichment capacity in a final deal, a former senior US official, speaking not for attribution, told Al-Monitor Sept. 24.

The Iranians had floated what he called “cosmetic” solutions to essentially “repackage” the plan, keeping Iran’s enrichment capacity at the level at which it is currently operating, about 9,000 IR-1 centrifuges, which is not acceptable to the United States or the P5+1, the former official said.

The United States and P5+1 have tabled various other compromise ideas to bridge gaps, including, according to The New York Times, removing piping to the centrifuges that Iran would not officially dismantle under a deal.

As of very late Sept. 23, no ministerial level meeting between Iran and the P5+1 had yet been scheduled to be held this week in New York, the former senior US official said, explaining that they don’t want to hold such a meeting and photo opportunity “just to have one” if no substantive progress has been made.

“Nothing will happen at the ministerial level meeting” between Iran and the six world powers by way of a breakthrough on the tough issues, the former official said. If it’s going to happen, it will happen “in a private conversation.” He added that the Iranians “may be under the illusion” they can get the world powers to soften their demands for reductions in their enrichment capacity in a final deal, but that is not true.

Other longtime Iran watchers still held out hope that the two sides would be able to narrow differences enough for agreement to be reached in the end. Prospects for possible future US-Iran cooperation on regional concerns such as Afghanistan, stabilizing Iraq and combating jihadi militants with the Islamic State hinge on first reaching a nuclear deal, says a new report by the Iran Project, co-authored by former US diplomats William Luers, Thomas Pickering and Frank Wisner, "Iran and Its Neighbors."

“I just don’t believe either side is going to walk away from a deal,” said Luers. “They are too close.”