Khamenei: Iran rejected US offer to cooperate against IS

Iran's Supreme Leader Ayatollah Ali Khamenei has said that despite statements by US officials, it was Iran who had rejected cooperation with the United States against the Islamic State group. 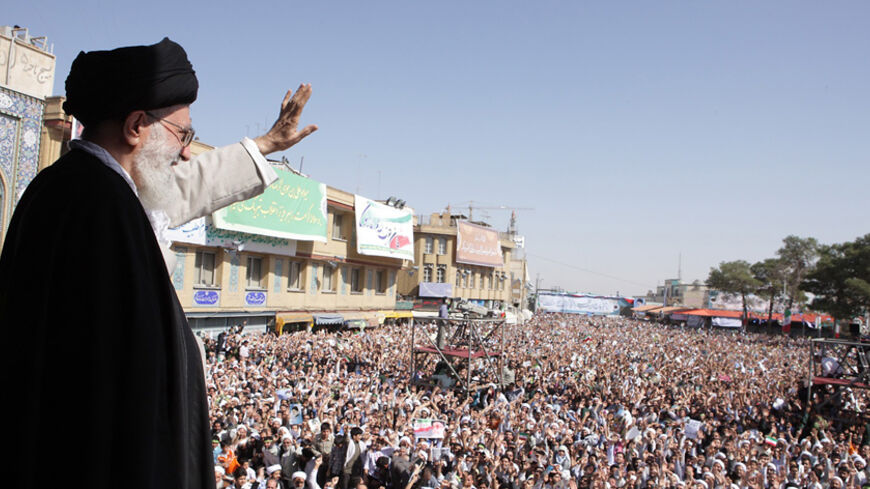 In his first statements since leaving the hospital after prostate surgery, Iran’s Supreme Leader Ayatollah Ali Khamenei said that US Secretary of State John Kerry had requested via Iran’s foreign minister that Iran cooperate with the United States and its coalition against the Islamic State group (IS) in Iraq, and that Iran rejected the offer.

In his post-operation interview to thank the hospital staff and express his appreciation for all Iran's officials and other figures, Ayatollah Khamenei said while he was bedridden he had heard “about the statements by American officials about the fight against [IS], which was really amusing.” He called the statements by US officials “futile, hollow and agenda driven.”

Khamenei said, “What was really amusing to me is that I saw the American secretary of state and his spokesman explicitly say, ‘We will not invite Iran in a coalition against [IS].’ First of all, what an honor for us that America is discouraged from working with us in a group effort. That in a job that they are doing, which is wrong, they don’t want us to be there. It is a source of pride, not a source of disappointment.”

“Secondly, I saw that they all lie. Because in the first days that [IS] was taking over [parts] of Iraq, the Americans, through their ambassador, requested of our ambassador in Iraq to sit down and cooperate in regard to [IS]. Our ambassador told us this.”

He said that some officials “didn’t say anything,” suggesting that they favored such a meeting. “But I opposed it,” Khamenei said. “I told them that in this particular situation, we will not cooperate with the Americans, because their hands are polluted. And in this situation, how can we work with someone whose hands and intentions are polluted?”

“After that, the secretary of state said in front of the whole world, ‘We will not request help from Iran.’ He personally requested of [Foreign Minister Mohammad Javad] Zarif to work together against [IS]. Dr. Zarif rejected it.”

He continued, “His deputy, who is a female, she asked [deputy Foreign Minister Abbas] Araghchi, during the [nuclear] negotiations, to work together. They rejected it.” By this "deputy," he presumably meant Undersecretary of State for Political Affairs Wendy Sherman.

“After we rejected it and explicitly said, 'We will not work with you,' now they say they don’t want to bring Iran in. Before this, they created a coalition against Syria. They brought together 30, 40, 50 countries and couldn’t do a damn thing against Syria. It’s the same with Iraq. They don’t want to do anything serious. The actions taken against [IS] and what broke the back of [IS] was not the work of Americans. They know this well. [IS] knows this well. The people of Iraq know this well as well. They know that it was the work of the people of Iraq. It was the work of Iraq’s military. They learned how to fight [IS] and it will be them who attacks [IS].

He continued, “America wants to find an excuse, so that what happened in Pakistan, that with an established government and a strong army — Pakistan’s army is a strong army — without permission enters Pakistan, bombs wherever it wants, wants to do this in Iraq and Syria. They should know [if they do] such a thing, the same problems that came about for them in the last 10 years in Iraq will come about again.”