In an interview with Al-Monitor, Hungarian-Iranian painter Gizella Varga-Sinai talks about her work and her passion for Persian culture. 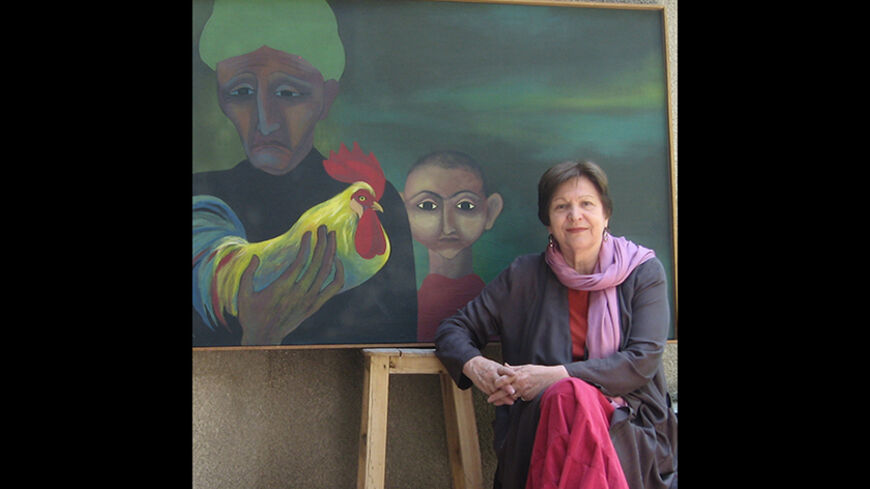 Gizella Varga-Sinai’s artwork doesn’t simply boast beauty, it recites poetry in volumes. Her “Kallehpaz” — one of the hundreds of paintings reflecting her love of Iran, Persian culture and everyday life — has found a permanent home at the George Pompidou Cultural Center in Paris.

Varga-Sinai has lived in Iran since 1967. Originally Hungarian, her passion for Persian culture probably exceeds most cultured Iranian artists. She speaks Farsi fluently with an elegant and poetic choice of words, yet with a perfect grasp of modern everyday literature.

The artist's newest project is an amazing series of work exhibited in several countries and soon to be unveiled in Tehran. While working on this project, she is also passionately pursuing two other cultural projects. One is a short film for an upcoming festival in Tehran, a project she agreed to do to encourage Iranian youths to pursue the arts. She will also spend some time in the south of Iran to work on an art project about the Persian Gulf.

When asked in a telephone interview with Al-Monitor about young and rising Iranian artists, Varga-Sinai says, “We professional veterans need to work hard to keep up. There are so many promising young artists in today’s Iran. Some of them have this new hobby of meeting up and gathering in art galleries. A large number of upscale modern art galleries have sprung upon the artistic scene of Tehran over the recent year. Most exhibitions open on Fridays, when people are off work and traffic is surmountable. A lot of young artists and art lovers have set this tradition of meeting up at these art galleries. Girls doll up and boys dress impeccably, and they spend their Friday afternoons seeing art and mingling. It’s amazing.”

I ask Varga-Sinai about the current condition of the arts in Iran, and whether she has observed any notable developments under the presidency of Hassan Rouhani. She replies, “During [Mahmoud] Ahmadinejad’s presidency, pretty much everything in the artistic sphere was on hold. There was no activity. Over the past year, however, fresh blood is running into the veins of modern arts and artistic events in Iran. A lot has already evolved, and much is changing for the better.”

Gizella Varga-Sinai in 2014, (photo by Jalili Foutuhnia, courtesy of the artist)

Varga-Sinai recently unveiled her travel book on Georgia, about her first trip to the country. She tells me she found it a great experience. She says, “Although the country is so close to Iran and I travel so much, I had never been there before. I love the post-socialist freedom that has brought about so many artistic virtues in Georgia, particularly among the youth. I related to that entire ambience.”

Gizella Varga-Sinai was born in Budapest at the height of World War II. The story of her life, family and upbringing is a one-of-a-kind tale spiced with everlasting longing to discover the East and yearning to decode the West. She moved to Vienna and then to Iran with her renowned filmmaker husband, Khosrow Sinai, and eventually called Tehran her home and herself Gizella Varga-Sinai.

Varga-Sinai is an artist I know well, and I have lived through the decade of not seeing her by following her artwork. She is a true artist who lives art, practices painting and preaches poetry distant from the conventional narcissism and negativity of many artists. She’s modest and cheerful and ever ready to explore and experience. So when she gathers this all into a collection reflecting her worldwide travels throughout the years, accentuating elements that have affected her work, the collection becomes a must-see.

“The last bit I’ve added to the bits and pieces symbolizing my life over the years is a copy of my national card [a relatively recent addition to Iranians’ personal identification documents]. The strong point of this exhibition is that it could be folded up and then spread out fairly easily. So it’s quite portable, although showing it with all the installation along with it requires ample space.”

In this new collection of Varga-Sinai’s art, you see her wearing slip-on shoes and carrying her brown suitcase with a maple leaf on it. She is placing her belongings and her faith in the suitcase en route to Vienna from Budapest, on the "Viennese Waltz," the name of the train running over the Danube between Budapest and Vienna. At an exhibition in Budapest, her daughter played her as a young aspiring dreamer. She herself was, of course, the eternal dreamer, present in the exhibition as the Varga-Sinai of today. She says she would love to show her recent work in the United States and is open to invitations to exhibit the collection.

Varga-Sinai calls herself a "Hungarian wanderer in Iran," which is the title of her newest batch of artwork as well. She knows Iran very well, and always speaks of the Iranian cultural, literary and natural elements that have helped shape her work over the years. She used to visit Hungary more often, when her mother was alive. In recent years and in the wake of her mother’s passing, however, she has been visiting her homeland less frequently, and has been staying more in Iran — her other and beloved homeland, as she calls it.

One of Varga-Sinai's new creations is what she refers to as her "magical veil." On it, she has printed pictures of herself over the years and in the countries where she has lived, and elaborated on them with symbols of those countries and those eras. Her passport photo (in a socialist Hungarian passport, symbolizing her country as she left it), her picture combined with the lion-and-sun symbol of the Iranian flag before the revolution, and a copy of her Iranian national card are among the images. I ask her the reason she chose a white veil to collect all these symbols and elements. Varga-Sinai replied, “It bears a feeling of home, of Iran and my love of Iran. Traditional Iranian women still wear a white veil with a colored floral print when they want to go outside the house in the yard, or to run a quick errand nearby. This is the familiar veil, the chador. And mine bears its imprinted magic of the years and times.”

Gizella Varga-Sinai is an artistic phenomenon. Once, years ago, she told me, “Hungarians used to be nomads, and I think that may be the root of my passion for the East, and for Iran. Who knows? Perhaps, in another life, I was born and bred in Iran.”