Hospital cleaners in Gaza are on strike over unpaid wages from the consensus government, one of many problems in Gaza since the reconciliation agreement between Fatah and Hamas. 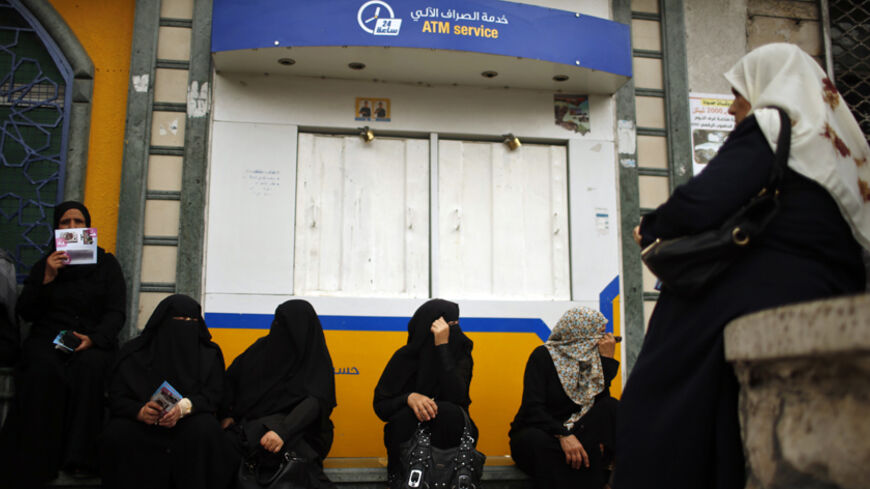 Palestinian employees paid by the Palestinian Authority wait to receive their salaries outside a closed bank after a scuffle with employees appointed by Hamas, in Gaza City, June 5, 2014. - REUTERS/Mohammed Salem

GAZA CITY, Gaza Strip — A crisis has swept through Gaza's hospitals, as some 750 cleaners have stopped working to protest not getting paid since the national consensus government assumed power.

The protest has resulted in the delay of hundreds of surgeries until further notice.

This crisis is one of many problems that have surfaced in Gaza since the reconciliation agreement was signed between Fatah and Hamas and a national consensus government was formed in June.

Palestinian Labor Union head Sami Amsi confirmed that the workers in cleaning companies have not received their salaries for five months, which triggered the strike. “The cleaners have been asking the consensus government for their rights for the past months, but the government turned its back on them,” Amsi told Al-Monitor, saying that a cleaner’s salary does not exceed 700 shekels ($200) a month.

He noted that the cleaners stopped working in various parts of Gaza hospitals, including, the operating room, intensive care, the reception area and physical therapy ward.

Muhammad Abu Zahra, a cleaner in Al-Shifa Hospital with five children, works eight hours per day without getting paid.

“I work every day, nonstop, to support my family. I have to pay the college tuition of my son and buy expensive medication regularly for my wife, who has cancer. I also have to pay the monthly rent,” he told Al-Monitor.

“How can I support the needs of my family, from shelter to food and clothing, when I am not getting paid? The government is giving us no other option but to emigrate and lead a dignified life,” he said angrily.

Deputy Health Minister Yussef Abu Rish, who was appointed by the former government of Hamas in Gaza, said that the workers’ strike has led to the postponement of more than 350 surgeries in hospitals across the Gaza Strip so far. He also said that, if the crisis persists, patients will be in greater danger.

“In the absence of cleaners, dirty sheets pile up and operating rooms are not prepped and sanitized from bacteria and microbes, and they are not cleaned from the blood of previous operations," Abu Rish told Al-Monitor. "The cleaners’ role is vital to start a surgery. Without them, surgeries cannot take place because it would be too risky for the patient’s life.”

Inaam Abu Rass, 39, a patient, visits Al-Shifa Hospital almost daily in the hope that a date will be set for the removal of a cyst in her abdomen. But each time, the doctors tell her that the operation has been postponed until further notice.

Clearly distressed from the pain, she said, “Around two weeks ago, a date was set for the operation. When I arrived, they told me it was postponed due to the cleaners’ strike. I cannot undergo the operation in a private hospital because they are very expensive. So, I have to wait until the strike ends.”

“We realize that we have a humanitarian role and that stopping work will create more suffering for patients,” Abu Zahra said. "But, I wish there was some compassion in treating us and our families. We do not want to be part of the political disputes between Fatah and Hamas.”

Omar Nasser, a Ministry of Health spokesman in the West Bank, told Al-Monitor by phone that the administrative and financial department of his ministry does not have any information regarding those workers and that the ministry has no record of their names.

“These workers do not exist in our records, and the ministry cannot pay money for people that it does not know of,” Nasser said.

Nasser, who was appointed by the consensus government, noted that the problem of these workers is a result of the political division between Fatah and Hamas. “Hamas signed contracts with cleaning companies to manage the hospitals in the Gaza Strip. But, we have no knowledge of that. Besides, the health records between Gaza and the West Bank have not yet been unified,” he said.

Abu Rish responded, “These pretexts are just part of the consensus government’s escape policy. We sent dozens of correspondences to the minister, but we did not get any response. This is complete nonsense.”

Youssef Rizqa, a political adviser to former Gaza Prime Minister Ismail Haniyeh, said the crisis of the cleaning staff in hospitals is part of the consensus government’s refusal to pay the salaries of employees appointed by the Haniyeh government during the division.

“The reconciliation agreement does not need this problem. We cannot advance in the reconciliation file without solving this problem, which is considered one of the easiest to settle. Besides, it is among the fairest and most rightful demands. A decision should be taken, or Hamas will seek other options,” Rizqa told Al-Monitor.

Palestinian Prime Minister Rami Hamdallah said in a media statement Sept. 18, “A legal and administrative committee was formed to settle the file of Gaza’s employees and the way to pay their salaries. But, donor states threatened to cut off aids to the authority if it paid Gaza Strip’s employees their salaries.”

However, Hamas spokesman Sami Abu Zuhri said on his Facebook page that “the statements are not true.” Hamas asked Hamdallah for any correspondences or official documents from donor states to prove his allegations.

Amsi noted that if the workers are not granted their rights, the protests will escalate, putting the lives of many in need of hospital care at risk. He urged the current Ministry of Health to pay up as soon as possible.