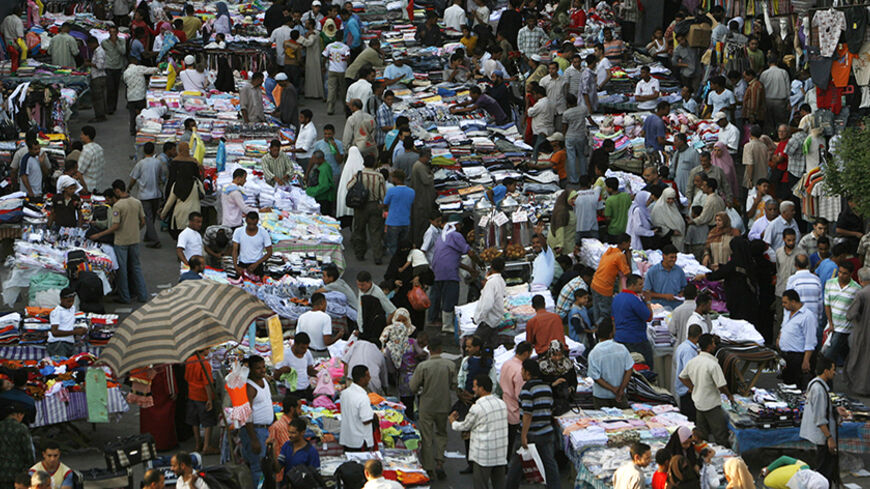 Measures of a country's economic development are based on several factors, including population growth compared to other countries with similar characteristics. On Aug. 19, Egypt's Central Agency for Public Mobilization and Statistics (CAPMAS) published an untitled report containing troubling economic and population figures for the country.

According to the population clock, there are now 87 million individuals in Egypt and another 6 million Egyptians abroad, for a total of 93 million. These people represent Egypt's human capital, but also a potential burden on a state trying to improve its economy by reversing declines in economic growth.

Meanwhile, Egypt's population growth rate reached 2.5% in 2013. This figure is high compared to other developing countries, which have an average growth rate of 1.5%. The rate for developed countries is below 0.6%.

Abu Bakr al-Jundi, the head of CAPMAS, told Al-Monitor that the major cause of overpopulation is poverty. As the needs of households increase, the need for additional children increases, as they represent a source of additional income from their potential to work. He said births per household in Egypt is now at four children, whereas 10 years ago it stood at 3.5.

Magued Osman, head of Egypt's National Population Council (NPC) and a professor on the faculty of economics and political science at Cairo University, told Al-Monitor that population growth poses a threat to any state if it is not accompanied by increases in production, which is the problem with Egypt. In addition, Osman said, human development and well-being in Egypt have not been achieved as in some other developing countries due to low education levels and poor health.

Data shows that Egypt’s population has grown over the years, but the country has not effected increases in agricultural land or in the amount of available water. Egypt, an agrarian country, is losing nearly 60,000 acres per year as a result of soil erosion and construction. Moreover, it suffers from a significant lack of water. Its share of water from the Nile, approximately 55 billion cubic meters per year, has remained unchanged since 1954 despite a threefold increase in population.

Osman said that the Population Division of the Department of Economic and Social Affairs of the United Nations, which predicts population size based on a variety of birth rate scenarios, projects that even if Egypt succeeded in pursuing a low birth rate scenario, its population would continue to increase, reaching 100 million people in 2036 and up to 105 million by 2050. A high birth rate scenario would see the population exceed 100 million in 2025 and 140 million in 2050, representing what Osman called “national suicide.” The state would not be able to support that many people, and national production would be insufficient to meet their needs, thus making the country dependent on imports, further burdening the economy. According to Osman, the Population Division's estimates for growth in Egypt exceed both those of Turkey and Iran, two countries whose populations were equal to Egypt's at the beginning of the millennium.

Jundi said that CAPMAS’s role is to monitor population issues and present the findings to officials. So far, however, according to him, the authorities have not acknowledged that Egypt has a population problem that represents an increasingly heavy burden on the government in terms of providing basic services. The most likely outcome of such inattention is a deterioration in living standards and growth in unemployment. The latter might already be occurring, as unemployment reached 13.3% in the second quarter of 2014, whereas in 2010 it stood at 9% during the same period. Thus Egypt appears to face major obstacles to economic development.

Jundi believes that the problem of overpopulation cannot be solved simply with projects designed to reduce the birth rate, but also requires raising awareness about the gravity of the crisis. Thus far, state-led projects, such as the Family Planning Program, have not achieved the desired results, given Egyptians’ apparent lack of will to limit their reproduction. Osman said officials have been slow to deal with the brewing crisis, exhibiting little if any interest in pursuing and tackling the problem of overpopulation.