The Israeli prime minister and finance minister's public quarrel over the defense budget is more a political show than a real coalition crisis, as both politicians are benefiting from the rivalry. 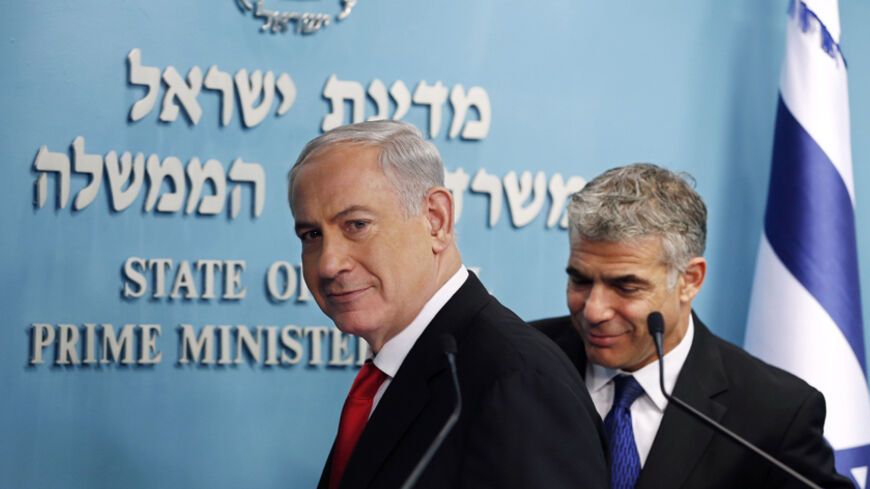 On the night of Sept. 15, the media reported yet another escalation in the conflict between Prime Minister Benjamin Netanyahu and Finance Minister Yair Lapid regarding the 2015 budget. At the time, Netanyahu was participating in a celebratory toast in honor of the New Year with Likud Party members in the city of Petach Tikva, where he received a very warm welcome. Dramatic headlines screamed that the prime minister had instructed to freeze the authorization process of the "0% VAT bill," the finance minister’s signature plan, until the latter withdrew his opposition to an increase in the defense budget. The news threatened to create a coalition crisis that could snowball into early elections.

However, the prime minister circulated leisurely around the sports hall in Petach Tikva, enjoying the holiday atmosphere. He shook hands with dozens of activists and supporters and basked in applause. His people informed him that none of the Likud’s ministers and Knesset members (except for Moshe Feiglin) attended the competing gathering held at the same time in the city of Ashkelon by Knesset member Danny Danon. Danon had been Netanyahu’s deputy defense minister until he was fired in July after becoming Netanyahu’s in-house opposition.

Upon meeting Knesset member Gila Gamliel at the event, Netanyahu seized the chance to tell her that he was not the one who gave the order to freeze Lapid’s law, whispering, “It didn’t come from me." Nevertheless, journalists asked the prime minister’s spokespeople if he was behind the threat to Lapid, and they would neither confirm nor deny. They had good reason not to deny the headline, which was at best inexact or at worst the result of a successful spin. In fact, the individual behind the freeze message was coalition chairman and Knesset member Yariv Levin. Levin argued that so long as Lapid would not authorize an increase in the defense budget, then there was no point in promoting Lapid’s law in the Knesset.

But the fact is that the atmosphere of crisis in the coalition benefits both the prime minister and the finance minister. Both Netanyahu and Lapid used the inflated reports on the confrontation between them to put on a show for their respective publics, but the truth is that both sides know how the performance will end. Since neither really wants early elections, a solution will be found and this time, the government will stand firm. Lapid is not interested in leaving the government until he has at least one achievement to show his constituents, and Netanyahu is not interested in starting an election campaign at this time, after Operation Protective Edge and going into budget discussions. At this point, the political forces are reorganizing themselves and no one can predict where the campaign will end up.

Ever since the conclusion of the conflict in Gaza, Netanyahu has sided with Defense Minister Moshe Ya’alon in the budget war and explained that the threats facing Israel mandate a larger investment in defense. At the New Year celebration in the prime minister’s office on Sept. 15, Netanyahu said, “Any responsible leader, in the face of the increasing threats around us, would demand and make possible a significant increase in the defense budget given the reality and the growing security challenges around us, and this is what we will do.” He had expressed this message at several other opportunities, including at the Sept. 14 meeting with Lapid and Bank of Israel Governor Karnit Flug.

One does not have to be especially astute to realize that Netanyahu clings to the security agenda. His hints about the new diplomatic opportunities, uttered toward the end of the Protective Edge campaign, have been recently exchanged for fear-inducing statements. The prime minister is trying to jockey for position in anticipation of the political battles that await him on the right. He is again courting his electoral base and trying to establish himself as a responsible adult, in comparison with Lapid’s inexperience in defense matters. In any event, the cards are in Netanyahu’s hands. He can always avert the dismantling of the coalition by passing the 0% VAT law. But meanwhile, he'll let Lapid sweat a while.

The war with Netanyahu also suits Lapid very well. He shows the large middle-class crowd that expressed confidence in him in the 2013 elections that he is their faithful lobbyist around the government table. From Sunday on, Lapid has been running from one television studio and radio station to the next, giving a series of interviews. His mantra includes two commitments: that he will only remain in the government if the 0% VAT law is passed, and that he will not allow an increase in taxes to enlarge the defense budget. But in this kind of overexposure, the finance minister displays a lack of political experience. He comes across as being tense and stressed, and unnecessarily climbs to very high positions from which it will be hard for him to descend later on.

Politically speaking, Lapid is in a problematic situation. Dismantling the coalition is not a good thing for him because, from the beginning of the current government until now, he has not scored enough achievements or earned recognition that would avert his collapse in coming elections. Housing prices are still sky-high, and the diplomatic process is practically science fiction at the moment. All this is expressed in opinion polls that predict a dramatic decrease in mandates. Therefore, Lapid needs the 0% VAT law and we can certainly assume that he will eventually receive it from Netanyahu. Lapid clarifies that he does not object to increasing the defense budget, but disagrees on realizing this through raising taxes. Here is a possible compromise to the crisis: The defense budget will increase, the 0% VAT law will be passed and taxes will not rise. With some creative thinking, another budgetary source will be found to add another 7 billion Israeli shekels ($1.93 billion) to the defense budget.

Therefore, we don’t have to make too much of the current crisis between the prime minister and the finance minister. It is true that the two could be on much better terms, but the current media confrontation serves them both. It supports them vis-a-vis their respective publics and positions them well, from their point of view. The way things look now, Israeli citizens will be able to celebrate the upcoming holiday period without significant political shake-ups.