At the UN General Assembly, Prime Minister Benjamin Netanyahu accomplished what he is best at: delivering speeches and identifying threats, without identifying opportunities or making any historic decisions — again. 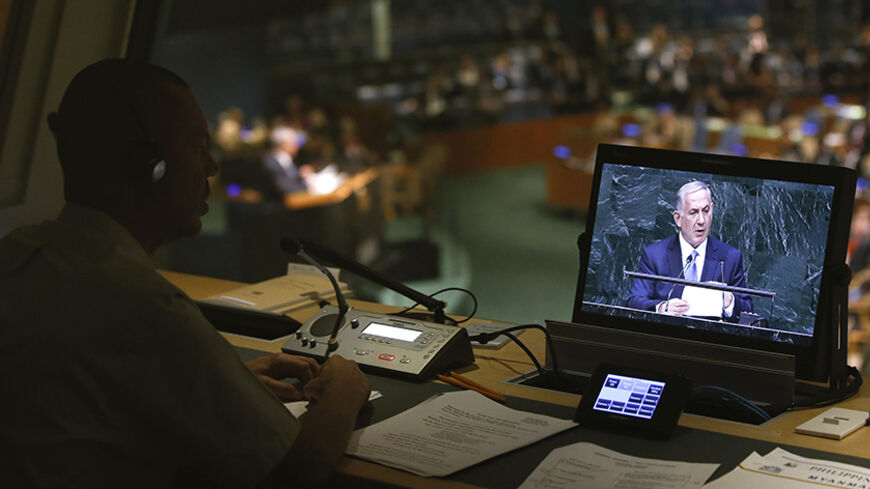 It was Benjamin Netanyahu’s ninth speech Sept. 29 as Israeli prime minister before the General Assembly of the United Nations. The veteran Israeli leader never misses this chance. Every year he insists anew on being the one standing at the podium, while Israel is put on public trial before the international community, so that he can be our ultimate Alan Dershowitz. Netanyahu knows why he is doing this too. Without these speeches, and without his appearances in Washington before both houses of Congress and the participants at the AIPAC conference, he would not be prime minister. It’s what Netanyahu knows how to do best: deliver speeches.

He writes his own speeches himself, diligently, punctiliously. He writes and erases. He corrects and edits drafts. He has what it takes. His predecessors, including Prime Minister Yitzhak Rabin, let their advisers write their speeches for them, and then provided feedback and made corrections when necessary. Then again, his predecessors, including Rabin, Prime Minister Ehud Olmert and Prime Minister Ariel Sharon, also did things physically, in the field. They changed the face of history. Netanyahu just gives speeches, which is why he doesn’t leave the work of writing to anybody else. That’s his job.

Israel has a leader who essentially serves as minister of public diplomacy, national psychologist, top lawyer and talented advocate. In all other ways, this leader is unfit. He caused our relationship with Washington to collapse. He dealt a serious blow to Israel’s power of deterrence. He made a significant contribution to destroying the peace process (though Palestinian President Mahmoud Abbas made an even more decisive contribution, when he refused to accept the Kerry Initiative). He caused the cohesiveness of Israeli society to crumble and led the country to brilliantly stoic isolation internationally. And yet, despite all of that, Israel is addicted to Netanyahu. It is addicted to his speeches, his warning, his authoritative baritone voice which pounces on every inkling of danger or any hint of a plot against Israel, and turns that into pure gold in the service of Israel’s public diplomacy. The constant fear of annihilation is in the genes of the Israeli people. It takes very little effort to convince them that their annihilation is lurching right around the corner. Netanyahu is great at doing that.

To be fair, it is important to note that in most cases, Netanyahu’s warnings have proven themselves correct. He has a knack for identifying risks. His perspective on the Islamic State was more accurate than that of President Barack Obama and the West. In his speech, Netanyahu declared that the Islamic State and Hamas are two branches extending from the same poisonous tree. When it comes to the true essence of Islamic State, the West gets to understand it only the hard way. That hard way will get even harder, before the West also understands the true essence of Hamas and the link between uranium enrichment in Natanz and the blood-curdling possibility that the Islamic State will enrich uranium too or get its bloodied hands on weapons of mass destruction.

Netanyahu’s problem is that he focuses exclusively on identifying risks, while completely ignoring chances and opportunities. As of now, he is squarely in the midst of a sharp turn to the right. Economy and Trade Minister Naftali Bennett, the leader of the HaBayit HaYehudi party, is tailing him from the right. Foreign Minister Avigdor Liberman is there, too. Netanyahu is fighting to win Israel’s right, but he’s forgotten to fight for the soul of Israel, which needs a peace process, international legitimacy and a breach in the wall of Middle Eastern isolation. Intensive contacts between Israel and many of the surrounding states have never been so frequent. They are motivated by common interests, deep concerns about the Islamic State, radical Islam and other issues. Netanyahu mistakenly interprets all of this as some genuine diplomatic development. He expects Saudi Arabia, the Gulf states, Egypt and Jordan to wallow in the dirt at his feet without him ever agreeing to discuss the Arab League’s peace initiative. That way he can waste away another year on his way to enduring devastation.

Former President Shimon Peres sits there helplessly, watching this happen. The moribund peace process between Israel and the Palestinians bears his name more than any other Israeli. He is the last of the optimists, who tried until the very end to extract the wagon from the mire. He spent dozens of hours sitting with Netanyahu during his term in office. The prime minister’s wife, Sara Netanyahu, was usually present at those late-night meetings, too. Peres appealed to the prime minister’s heart. He applied pressure on him. He used the Americans, the Europeans, moderate Arabs and anyone else he could. Sometimes it actually seemed to him as if Bibi (Netanyahu) understood.

In Netanyahu’s previous term (2009-13), Peres almost succeeded. Netanyahu sent him to secret talks with Abbas, but changed his mind a moment before Peres produced a document of understandings. As aforesaid, Peres is completely frustrated, not only because there is no real opposition to Netanyahu, but also because no one in Israel is prepared to relax their ego in the slightest “to save the country,” as he calls it. He tries to appeal to the leaders of Israel’s opposition parties (and some of the coalition partners, too) to join forces to topple Netanyahu. So far, it hasn’t gotten anywhere. As far as Peres is concerned, Netanyahu’s speech brought peace to “a historic burial.” In private talks, Peres states decisively that Netanyahu has buried the peace process and wonders, “What kind of historic compromise can there be without a territorial compromise?” According to Peres, “Israel doesn’t have a lot of time. Netanyahu is uniting the Arab world against us. He is not offering any hope.”