Israeli Prime Minister Benjamin Netanyahu recently lauded the leadership of Prime Minister Yitzhak Rabin for his courage in launching the 1976 Operation Entebbe, though he himself has never followed him in making historic decisions. 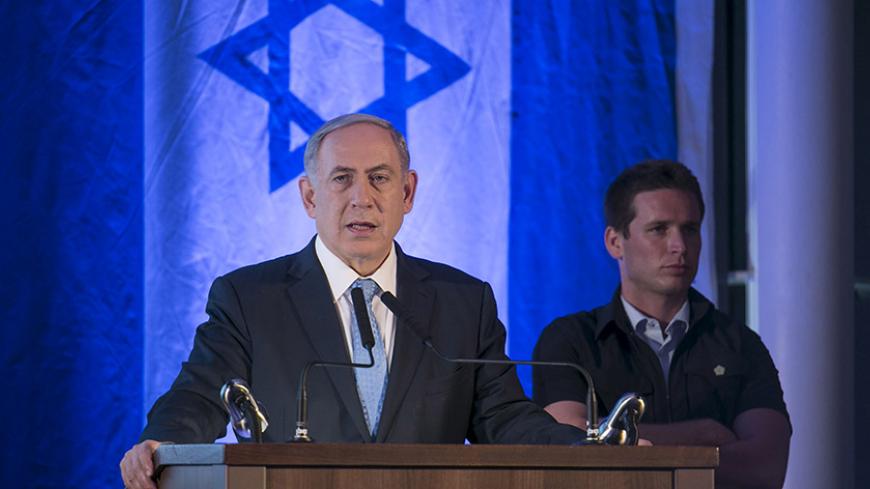 “The operation required bold leadership from Defense Minister Shimon Peres, who advocated action, from the Cabinet, which approved it, and above all, from Prime Minister Yitzhak Rabin, who made the critical decision. Without his determination and daring, without his leadership, the operation would never have taken place. From the perspective of almost 40 years, having served 10 years as prime minister, I know how momentous that decision was for him,” said Prime Minister Benjamin Netanyahu at the July 9 opening of an exhibition about the 1976 military operation to free the hostages in Entebbe. In Israel, the operation is commonly known as Operation Jonathan, after the prime minister’s brother Jonathan Netanyahu, who commanded the force in that Uganda airfield and lost his life in the assault.

His important words were eclipsed by the inevitably tense meeting that followed between Netanyahu and the Rabin family members in attendance. Much has been written about the acrimony and hostility that the late prime minister’s family has felt for Netanyahu ever since Rabin was assassinated in November 1995. For years, they have considered Netanyahu persona non grata. According to them, he was one of those behind the campaign of incitement that ultimately led assassin Yigal Amir to fire the three shots that killed Rabin. This week, almost 20 years after the assassination, Netanyahu paid his first official visit as prime minister to the Rabin Center. He sat beside Dalia Rabin, the late prime minister’s daughter, and had a lengthy conversation with her.

Focusing on this rare and volatile meeting and Netanyahu’s moving comments about his brother, the media missed the essence of Netanyahu’s speech. It was bursting with superlatives about Rabin’s leadership in giving that bold and fateful order to launch the operation. The raid on Entebbe was to become one of the most remarkable rescue operations of the era.

At the time of Operation Entebbe, Netanyahu had just been discharged from the military after serving in the elite Sayeret Matkal commando unit, commanded by his elder brother, Lt. Col. Jonathan Netanyahu. The younger Netanyahu was then a student in Boston. The death of his brother changed his life, leading him first to a public and political battle against terrorism and from there to the very summit of Israeli politics. Netanyahu has been in senior leadership positions for almost two decades now, first as prime minister and then as foreign minister and finance minister. Since 2009, he has served again as prime minister. All in all, he has been prime minister for almost a decade, a feat paralleled only by Israel's first Prime Minister David Ben-Gurion.

On the other hand, as time passes, more and more people on both the right and the left wonder whether Netanyahu’s long tenure at the top of Israeli politics is evidence of bold, high-quality leadership of the kind he described in his speech about Rabin or just the outcome of smart politics. Netanyahu is seen as someone who transformed political survival into an art form. No one questions the fact that when it comes to overcoming and defeating political rivals, Netanyahu is in a league of his own. In contrast, when it comes to making bold, historic political decisions or launching risky military operations, his presence remains negligible. He failed to attack Iran’s nuclear reactor, despite all of his intimations and threats. He was dragged into Operation Protective Edge, and he has succeeded in pushing off any resolution of the Palestinian problem for years.

That is why it was especially intriguing to hear the way that Netanyahu himself described Rabin's moment of truth and, through this, the decisions and challenges faced by Israeli prime ministers in general.

“The prime minister must have considered the risk of the operation failing, and that would have left our best warriors fighting for their lives in the heart of Africa, without any real chance for us to extricate them,” said Netanyahu. “I know that he confronted the possibility of a terrible tragedy, of the military and diplomatic disaster that Israel would have faced had the operation failed. And he considered the safety of the commanders, who had very few days to plan and implement the operation, but were nevertheless convinced that they could get the job done. Yitzhak Rabin needed enormous personal strength to approve the operation. He weighed the options and made his decision. The result was an operation that is now considered one of the most daring rescue operations in history.”

Inevitably, Netanyahu failed to mention the Oslo Accord. Yet, it is worth recalling that Rabin’s decision to shake hands with his bitter enemy, Palestine Liberation Organization leader Yasser Arafat, a man who engaged in terrorism against Israel, was also an act of bold leadership. Rabin’s deliberations are obviously open to challenge. One can question whether he chose the right path. Nevertheless, he made a historic decision, fully aware that he could pay a heavy political price for it. And in the end, he paid with his life. That is because the idea of assuming responsibility was at the core of Rabin’s approach to leadership. It figured prominently in 1977, when he resigned after the media discovered that his wife Leah kept an illegal bank account in the United States. At the time, it was illegal for Israeli citizens to hold bank accounts overseas. It figured again during the failure of the operation to rescue Israeli soldier Nahshon Waxman, who had been abducted by Hamas in 1994. Rabin ordered the operation to free the kidnapped soldier, and Waxman and an officer from the Matkal commando unit were killed. Rabin appeared at a press conference moments later and made the following remarks to the public: “As prime minister and defense minister, I bear full responsibility for tonight’s operation against the terrorists who kidnapped Nahshon Waxman and held him hostage as a bargaining chip.”

It is hard to come up with any similar remarks about assuming responsibility from any point in Netanyahu’s 10 years in office. No such comments were made by Netanyahu about the housing crisis when prices kept increasing sharply across the country, a phenomenon that intensified on his watch due to neglect, or about the fiasco surrounding the tunnels that Hamas dug under southern Israeli localities and were only discovered during Operation Protective Edge. There was nothing about the collapse and crash of Israel’s international status and reputation due to the collapse of diplomatic talks with the Palestinians, or about the Mount Carmel fire in 2010, in which 44 lives were lost due to bureaucratic failures.

Netanyahu’s speech at the Rabin Center revealed the enormous gap between what he considers to be proper leadership and the way he actually leads. He now has 10 years and four terms as prime minister under his belt, and he has yet to make a single major and historic decision as leader. Facing a Middle East full of risks, but also full of opportunities, the chairman of the Likud presents a conservative style of leadership that lacks initiative and daring. It is, in fact, the exact opposite of the type of leadership shown by senior government officials during Operation Entebbe.