Kindergarten teachers in the Syrian flashpoint city of Zabadani established a center to provide much-needed psychological support for local children. 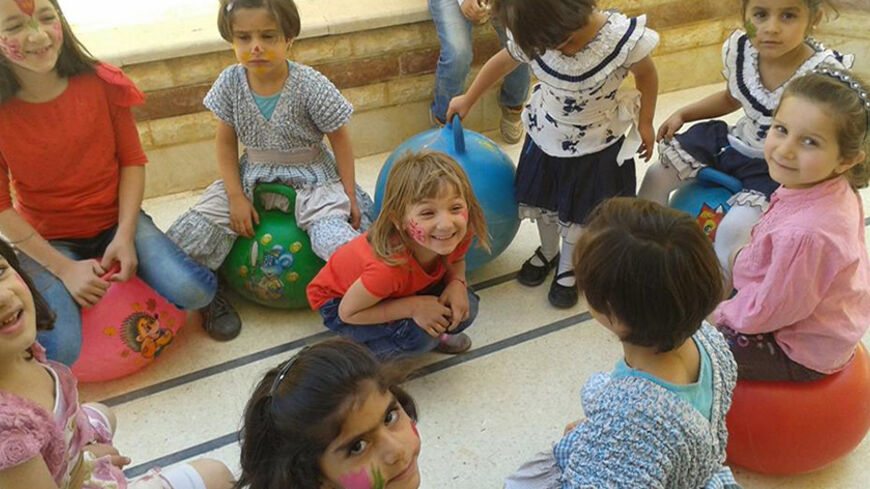 ZABADANI, Syria — The city of Zabadani, 45 kilometers (28 miles) west of Damascus, is still the scene of shelling by regime forces and clashes between these forces and rebels. Ten security and military checkpoints separate Damascus from rebel-held Zabadani, which was an important tourist destination before Syria’s civil war erupted. The city's continued clashes have had a considerable impact on the children who live there, prompting a group of Zabadani women to form a civil society group called Damma, which is Arabic for hug. In March, the women established a center to provide psychological support to more than 50 boys and girls from the region.

Damma's center is situated in a relatively quiet area in a southeastern suburb of Zabadani, near a Syrian army checkpoint. The area is packed with residential buildings and markets that have deterred the regime from targeting the area with explosive barrels. However, the silence is often interrupted by the sounds of barrel bombs being dropped over neighboring areas.

The three-room center is decorated with artificial flowers, as well as the children’s arts and crafts. This modest building has become, with the help of the Damma team and local residents, an escape for the children.

One mother said, “My daughter’s favorite place is now this center, where she can play and befriend other children. I have not seen her so happy in a long time, since [before] her father passed away. She is now more sociable and is getting much better with time.”

The Damma center's director explained the meaning behind the name Damma to Al-Monitor. The group's goal is to hug children in need and make them smile again. It aims to help the children of Zabadani overcome the war’s psychological effects and allow them to deal positively with their circumstances.

The director, who wished to remain anonymous, said, “The children have several activities, such as drawing and creating crafts out of clay and putty. They also have physical and mental activities, such as singing and different kinds of competitions, which help them with psychological release and to interact with other children. This is so they forget about the war for a few hours a day.”

During the summer, the center runs from 9 a.m. until noon. Before the children go to class, they exercise in the center’s front yard. A psychological support assistant at the center said, “The children’s interests differ. Some prefer drawing while others prefer team games and sports.”

The children's fear of war manifests itself in classroom activities, as in the case of Omar, 5. “Omar is passionate about drawing, but he is antisocial. During the psychological release sessions, Omar turned out to be really scared of checkpoints. I asked him to draw what he was thinking about and he drew a shotgun. When I asked him to talk about autumn, he instead spoke about the military checkpoint near his home where he constantly hears gunshots,” said the assistant, speaking on condition of anonymity, adding that she is trying to help Omar overcome his trauma.

Fear of gunshots and explosions is not the only cause of children's psychological issues, according to a teacher at the center. Six-year-old Mariam’s house was robbed, and she has been terrified by theft ever since. “She is always afraid of losing her school things and starts crying whenever a friend asks to borrow her things. Today, after three months in the center, Mariam has learned that sharing some things with her friends is OK and it does not count as stealing,” the teacher said.

The women responsible for the center have taken intensive courses in providing psychological support for the children. “We took a course with a civil society organization called Jozour (Roots), where experts in education and children’s psychological support trained us,” the director said. “Although we have all dealt with children before, since we used to work as kindergarten teachers, we also gained some personal experience.”

During the summer, the women teach the children the basic concepts of nature and English, and also participate in activities like singing, playing instruments, drawing, painting with watercolors and reading stories, which all considerably help to reintegrate children into their environments.

The center received an initial donation from Jozour in Damascus to cover rent and salaries for three months, in addition to the center’s equipment, said the director. “We now take a small amount of money from the children’s parents to carry on with our work,” the director said.

However, the director could not hide the fear she felt when transporting the materials, like desks and toys, from Damascus, and passing through all the checkpoints to reach Zabadani.

With simple means and limited materials, Damma’s psychological support center in Zabadani can help put smiles on children's faces. The center provides children with a "hug" to help make up for what they have lost.