An exhibition in Beirut combines poems written by Syrian children with Lebanese and Syrian artists’ paintings, drawings and sculptures. 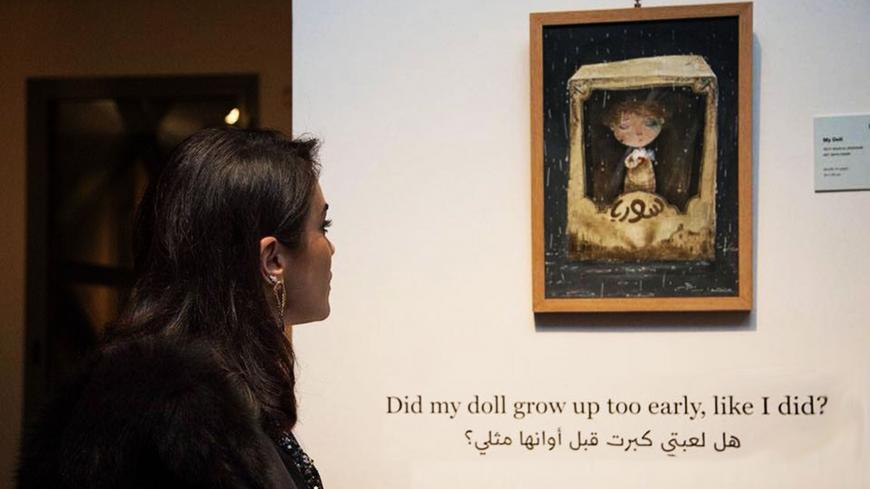 “I wish my father had not been killed in the war, just so that I could call him father,” wrote Ali Harb, 12, in his poem titled “My Father’s Abuse.” The poem, which he wrote when he was 10, expresses his pain of seeing his father die in front of him in Syria. This line, placed next to a somber painting by Lebanese artist Sandra Ghosn, is one of the works displayed in a collective exhibition called “Haneen” in Beirut.

“Haneen,” which means “loving” in Arabic, is supported by the United Nations Children’s Fund (UNICEF) in collaboration with local nongovernmental organization Beyond and Lebanese artist Chadi Aoun. The exhibition aims to show the healing nature of art in post-war therapy and to provide a bridge between the Syrian refugee children in Lebanon and Lebanese and Syrian artists. Thirty-nine poems whose stanzas are displayed in the exhibition are written by Syrian children, and 47 artists have interpreted them through paintings, drawings, sculptures and sound installations. The theme of the exhibition is what the war in Syria represents for the children.

The exhibition, on display March 9-11, takes place at a venue that has a symbolic meaning going back to the Lebanese civil war (1975-1990): Beit Beirut, or "the Yellow House," which is on the Green Line that divided the city during the war.

Ali did not talk at all when he started at Beyond's art therapy program. Director of Beyond Joe Awad told Al-Monitor, “After two years of art therapy, he started opening up and expressing himself.” On the day of the opening of “Haneen,” Ali was ready to answer questions from the media.

The change in the behavior of Ali and many of his peers is partly due to the work of Beyond, with the support of UNICEF. They opened 107 art therapy centers all over Lebanon between 2013 and 2016, when UNICEF decided to change its strategy to provide individual psychological help for the children most in need. Since then, Beyond has continued its activities with other partners. One of the activities, called the Press Club, allows children to learn how to read and write. They are encouraged to express themselves through words and use creative writing to express their feelings. The poems exhibited at “Haneen” are the result of the Press Club’s work by children from the various centers.

“With this exhibition, we wanted to show the change of behavior of the children,” Awad said. “In the beginning, these children didn’t talk, participate or make friends. They were hesitant to do anything. When we engaged them in the art therapy, music, singing, painting and writing, they started to express themselves. Now they are even talking in front of cameras. We want to show this to everyone so other NGOs can see that using art therapy works.”

“The war damaged these children, and we have to help them get out of the war cycle and have a brighter future,” UNICEF spokesperson Blanche Baz said.

One of the youth, Waad al-Zouhouri, 16, wrote a poem titled “Who are you?” on how people always question where refugees are from. “There is lots of politics in this question,” Waad told Al-Monitor. “What I want to say is that we are the generation that had to grow up too quickly. We will stand up and have hope again.”

Aoun, artist and curator of the exhibition, contacted the artists from Syria and Lebanon to transform the children's words into visual art pieces. He told each of the 47 artists to choose one story from the four or five stories he sent them. “It all started with Soha Boustani [chief of communication for UNICEF in Lebanon] who found the stories very interesting,” Aoun told Al-Monitor. “I had to do something to translate them visually, so I decided to do one piece per story. I think art is a strong way to convey a message, and I wanted the artists to be free to interpret the children’s words and to express their own feelings toward them. We are a generation who has lived through war before, so it is two generations [that reflect a common sentiment].”

Lebanese artist Noura Badran was born during the country's civil war. She chose to illustrate with watercolors a text by Aisha al-Mohamad, 13, who wrote, “Yes, we are children, but we bear the burden of grown men.” Badran used the image of an abandoned bicycle in a green and sunny garden, which was inspired by a place she had known in her childhood. “The war is something abstract for me because I was so young; I don’t remember it,” Badran told Al-Monitor. “But this text was very touching because childhood is like a jewel; when you are displaced by the war you lose everything, including the glimmer of hope.”

Not far from her, Karim Qabrawi, from Damascus, created an illustration about disability, based on the story of Taghreed Ezzedine, 14, who wrote about the fact that her father can’t speak nor hear. “She wrote that she wants everyone to be disabled so there is no war but peace everywhere,” Qabrawi told Al-Monitor. “She referred to sign language too, so I used it in my piece to express the world ‘help.’ These children, in my opinion, need help.”