The dust-up between hard-line secularists and Islamists shows that even the beach has become a referendum on Turkey's future. 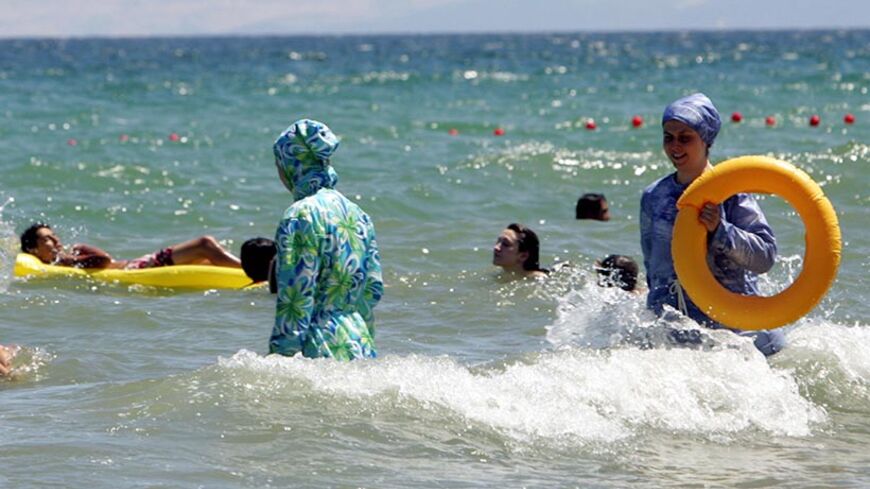 Turkey may be in the grips of a heated domestic political agenda, while Recep Tayyip Erdogan assumes his new position as the country’s first directly elected president and former Foreign Minister Ahmet Davutoglu takes over as prime minister, but a women-only beach — opened Aug. 16 in the internationally renowned Mediterranean resort town of Antalya ​—​ is also making headlines and fueling a controversy among Turks who are increasingly divided politically and socially.​

The controversy is not independent from the rise of Erdogan, who paraded his Islamist credentials once again while he was readying to be sworn in as Turkey’s 12th president earlier this week.

Many staunch secularists do not doubt there is a religious motive behind the Antalya municipality's decision to open a beach that caters exclusively to women, and where the security guards and lifeguards, as well as all other personnel, are women.

Further fueling the debate is that Antalya's mayor belongs to Erdogan’s Islamist Justice and Development Party (AKP), and was elected in March after beating the incumbent from the Kemalist and secularist Republican People's Party (CHP).

Secularists feel that this development is only the latest example of the Salafist tactics employed by the AKP to gradually impose the strictures of Sharia on Turkey (the segregation of men and women being one of the tenets of Islamic law).

At the beach's opening ceremony, Antalya Mayor Menderes Turel responded to his critics by saying the demand for this beach had come from women. He insisted that the municipality is not interfering in anyone’s lifestyle or imposing anything on anyone against their will.

Some liberal and secular Turks see no problem with such a beach, and agree with Turel that this is not an attempt at Islamic gender segregation but merely “positive discrimination,” or what is known as “affirmative action" in the United States.

They point out that many women feel more comfortable when there are no men hungrily gazing at them in their swimsuits — a common sight on public beaches in Turkey.

Turkey has, in fact, had such beaches in the past, as pointed out by Binnaz Toprak, a CHP deputy and the deputy head of parliament's Female-Male Equal Opportunities Commission.

“I don’t understand why the women-only beach is being protested. If some women are reluctant to go into the sea with men around, why should there not be a women-only beach? It is everyone’s right to go into the sea. There were such beaches in Moda and Bostanci when I was a child,” Toprak tweeted on Aug. 24. Moda and Bostanci are fashionable and liberal districts of Istanbul.

Not surprisingly, Toprak became a target for hard-core secularists who accused her of selling out to Islamists. Many others supported her and argued that there is nothing intrinsically wrong with women-only beaches, provided, as Toprak also pointed out, this does not become a rule across the board.

It's highly unlikely this will happen in Turkey, given that most Turks — including many who voted for the AKP for reasons other than religious sentiment — subscribe to secular lifestyles and would actively oppose it. Regardless, local groups staged a protest on Aug. 24 near the beach in Antalya’s Sarisu region.

Young men and women took to the sea holding hands, splashing around in front of the media. Protest organizers were also angry at press reports that the protesters were going to raid the women-only section of the beach as part of their protest.

Ayten Cehyan, the spokesman for the group, said this was never their intention, adding it would have been “very rude of them to do such a thing.” Admitting that their sisters in the women-only beach appeared to be enjoying themselves, Cehyan nevertheless said she did not believe there was a need for such a beach, and claimed this could be the precursor to future gender segregation on buses and other places.

The controversy surrounding the topic did not, however, prevent a large number of women from visiting the women-only beach. While many were seen to be wearing Islamic headscarves, many others were not.

Photographs and video from the beach showed women wearing special swimsuits known as “hashema,” which modestly cover the body from head to foot, as well as bikinis. Seeing women in bikinis and hashemas swimming together — alongside men — at public beaches is not an uncommon sight in Turkey, of course.

Another common sight, however, and one reported on indignantly by the press with photographic evidence every summer, is that of the “plaj magandasi” or the “beach yokel.” This is a crude class of men who position themselves on beaches around women in bikinis and engage in blatant voyeurism.

The problem has become so endemic in some areas — Antalya included — that special security personnel have been deployed to chase away the "maganda," or even arrest them for harassment. Thus, the idea of a women-only beach is likely to appeal to many women in Turkey, not just those driven by religious considerations.

Meanwhile, Sibel Arna, a female journalist for daily Hurriyet visited the women-only beach in Antalya shortly after it was opened. “On the beach, there was a shared feeling of discomfort. Everyone seemed to mistrust one another because everyone was undressed,” she wrote.

“When I started taking pictures half an hour into my visit, a woman yelled at me, ‘Put your mobile phone back in your bag.’ When I asked why, she explained: ‘I heard that there were journalists around here.’ I smiled when I saw the same woman topless within a couple of hours.”

Judging by Arna's article and what others have said, it seems that the “feelings of discomfort” will melt away once the novelty of the place wears off and the controversy surrounding it disappears.

Today, however, the controversy continues, with one side claiming the beach is a sign of the AKP’s ultimate aim to dismantle Turkey’s secular system, and the other side claiming that reactions to the beach only reveal how Kemalists — with their Baathist understanding of secularism — have no respect for genuine democracy and freedom of individual choice.

Writing in the daily Radical, Oral Calislar, a left-wing commentator who many see as an apologist for the AKP’s policies, claimed that the reactions to this beach betrayed a secularist mode of thinking that many thought had been overcome. He maintained that “conservative secularists” were trying to impose the idea that “women should not cover themselves at all, and if they want to, then they should stay at home.”

Turkey's secularist-Islamist fight has been taken to the beaches.