Ahmet Davutoglu declared two years ago in his role as foreign minister that he would rather resign than shake Bashar al-Assad’s hand; he now has to find a way to coexist with Syria. 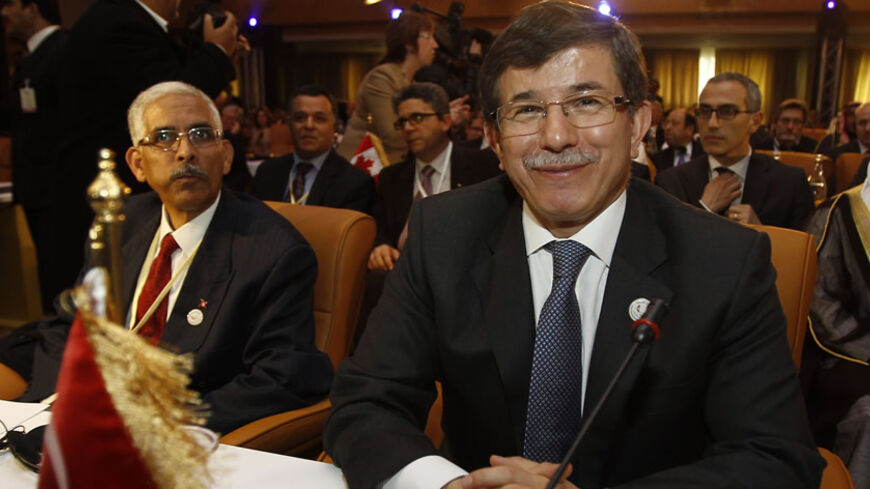 Turkey's Foreign Minister Ahmet Davutoglu (R) attends the "Friends of Syria" conference in Tunis, Feb. 24, 2012, where Western and Arab nations demanded that Syrian President Bashar al-Assad halt his crackdown on the opposition and allow aid to be delivered to desperate civilians trapped by the escalating violence. - REUTERS/Zoubeir Souissi

Turkish President-elect Recep Tayyip Erdogan, when announcing his successor as prime minister and chairman of the ruling Justice and Development Party (AKP) would be Foreign Minister Ahmet Davutoglu, spoke about how this move would affect Turkish foreign policy.

“With our decision, we are showing how much we seek peace and solidarity in our region and in the world. Davutoglu, who has attached priority to conscience elements of foreign policy, will now defend that even more forcefully at national and global levels.”

When looking back on Davutoglu’s five years and four months as Turkey's foreign minister, we see — besides this “conscience element” — many other foreign policy dimensions that are seriously lagging behind, have weakened or collapsed. For example, the process of Turkey’s EU membership is in the freezer, left to die. During the Davutoglu years, Turkey’s relations with Europe were consciously neglected, and the country made a strategic choice to distance itself from the West.

The paradigm that was used to cite “an influential Turkey in the Middle East reinforced by its strengthened European connection” has long collapsed. The definition of this paradigm in international relations was a “multidimensional foreign policy.” Davutoglu has not been able to mention this for quiet a while, because that, too, has fallen apart.

What Turkey has achieved in the Middle East with its so-called new foreign policy that gives priority to the “conscience element” can only be described as a disaster.

The ambition of “being the designer of regional order and a leader,” which was based on a romantic and ideological foreign policy, pushed Turkey into unprecedented isolation. Today, Turkey doesn’t have an ambassador in the most important Arab country, Egypt. Diplomatic relations with Israel are at the lowest level possible and cannot break out of the "cold war" format. Sectarian foreign policy implemented in the entire region and especially in Iraq brought relations with Baghdad to the breaking point.

Turkey became a party to the Sunni Islamist opposition in Syria’s civil war with the objective of toppling the Bashar al-Assad regime, but that only worsened already-tense relations with Iran. Today, the only country Turkey has good relations with in the region is Qatar; the Kurdistan Regional Government can only be regarded as a proto-state.

If foreign policy is the art of “managing contradictions,” Davutoglu did not do well. He simply could not reconcile the contradictions between the “conscience element” that he harps on so much and the “real politics dimension” that looks out for the common interests of the nation.

One cannot make an account of conscience without first recounting what happened, especially in the Syrian crisis that has become the mother of faulty judgments, misguided analyses and policies. Here, we must remember a statement Davutoglu made on Dec. 15, 2012: “Let’s say we made a mistake, we miscalculated and Assad is there for a few more years. This will not be the case, but let’s assume it is. We couldn’t do anything different, even if Assad were to stay. Personally, at this point, if Assad is to remain, I'd prefer to resign than to shake his hand.”

True, Davutoglu made many mistakes and gross miscalculations. The incorrect design and application of the Syria policy of the Erdogan-Davutoglu team had a major role in the dramatic developments in today's Syria and Iraq, and the emergence of new regional powers and alliances.

If Turkey had not opened its border with Syria in both directions to al-Qaeda-derivative Islamic State (IS), if so many fighters had not crossed the border into Syria with their guns and equipment and if this group had not used Turkey as a base, IS could not have amassed its current strength in Syria.

IS gained its strength in Syria because of the facilitating role Ankara played, which allowed IS to occupy Mosul, the second-largest city in Iraq. If IS had not captured Mosul, it would not have seized the Turkish Consulate and taken 49 Turkish nationals hostage.

Today, Turkey is a hostage to IS because of the Erdogan-Davutoglu policy on Syria. Because IS captured Mosul, it was able to seize the Mosul Dam and Sinjar, and threaten Erbil.

When IS continued to threaten the Kurdistan Region of Iraq and carried out genocide-like massacres of the Yazidis, major Kurdish parties such as the Kurdistan Workers Party (PKK) and the Kurdistan Democratic Party (KDP) put aside their differences and joined in a military alliance against the jihadists.

Until recently, Ankara used to take advantage of the discord between the PKK and KDP. If Ankara has lost this advantage now, it is because of its faulty Syria policy. Even more interesting and more dramatic for Ankara is how the PKK, which is on the US list of terrorist organizations, is now becoming a real ally of the United States in the region.

This is a perfectly logical outcome for the United States and the Western alliance that see IS as a grave threat to global security. The PKK in Iraq and in Syria its extension, the Democratic Union Party (PYD), are the most effective forces confronting the IS threat today.

The United States cannot directly and openly arm the PKK and cannot be seen in the same picture with it. However, none of this changes the reality on the ground.

The IS threat pushed the United States and Iran to coordinate their efforts through secret diplomacy against this joint enemy. Meanwhile, with the heavy weapons and equipment it captured in Iraq, IS sped up its advances in Syria.

The Syrian opposition has practically lost, and this reality will be undeniable when it is pushed out of Aleppo by Assad's army. That would mean a new calculus for a political settlement.

From this perspective, it appears that Syria will be made up of two powers and a half: the regime in Damascus and IS, with the PYD representing the Rojava Kurds.

Is it possible that the Western powers that see IS as the No. 1 global security threat still pursue the goal of toppling the Damascus regime?

This situation gives rise to some "realpolitik” questions for the immediate future: Does Davutoglu want IS to control the Syrian side of the border crossings with Turkey or the Assad regime? Which option will cause the Turkish people to be less affected by the Syria policy of Erdogan and Davutoglu?

Faced with this dilemma, can we still talk of the “conscience element”? Davutoglu is not expected to resign or shake Assad’s hand — his only option is “damage control.”

An Aug. 12 Washington Post article titled “In Turkey, a late crackdown on Islamist fighters" reported on Turkey’s belated measures against Islamist fighters and how Turkey had tightened control over IS jihadists at its border crossings.

A Turkish official was quoted as saying, "Turkey had stepped up detentions of suspected foreign fighters” and their deportation. A senior IS commander told The Washingont Post that it is no longer easy for them to enter Turkey.

These belated damage control efforts by Turkey can also be seen as practice for coexistence with the reality of a Syria with Assad.