The advance of Islamic State of Iraq and al-Sham (ISIS) forces in Iraq is forcing a re-evaluation of Foreign Minister Ahmet Davutoglu’s policies and priorities. 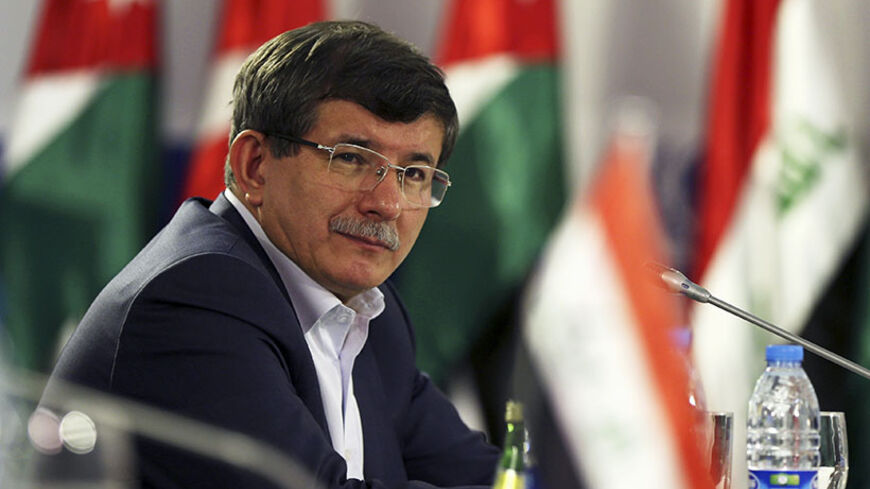 Turkish Foreign Minister Ahmet Davutoglu attends the opening of a meeting of foreign ministers in the Jordanian city of Mafraq, May 4, 2014. - REUTERS/Muhammad Hamed

Turkish President Abdullah Gul gave the first, and more importantly, the most sober reaction to dramatic developments in Iraq when he said, “I am sure such de facto developments won’t be allowed in this region.” He was referring primarily to Turkey’s Western allies. And he did have discreet criticism for them: “You may recall that I had drawn attention to this. I always warned our allies. We cannot afford to leave a vacuum. If you leave it, they will fill it as they are doing now.”

Then he added: "At the moment, our relations with Baghdad are not at the desired level, but there are intensive consultations." Gul was speaking after the extremist Islamic organization Islamic State of Iraq and al-Sham (ISIS) captured Mosul and the Turkish Consulate there and news came that they had also captured Saddam Hussein’s hometown, Tikrit, and Samarra and were moving toward Baghdad. From the words Gul carefully selected, it was understood that Turkey was not thinking of a unilateral military operation and was searching for a multilateral response to rollback ISIS battlefield gains.

During these dramatic developments in Mosul, Turkish Foreign Minister Ahmet Davutoglu, accepted as the architect of Turkey’s new Middle East policy, was abroad. His reaction to ISIS was very tough: “Nobody should test Turkey’s resolve.”

But hadn't Turkey's “deterrent” capacity been well tested by the Middle East’s new protagonists since 2010’s flotilla incident in the international waters of the east Mediterranean against Israel? Or, more importantly, against Syria when Turkey’s fighter jet was downed by a Syrian missile in June 2012? Or in May 2013 after the bloody car bombing in the Turkish border town of Reyhanli that took more than 50 lives, when Turkey put the responsibility on Syrian intelligence and declared that it would not go unpunished?

Nothing happened. ISIS’s supposedly fanatical fighters have no reason to be deterred by Davutoglu’s belligerent remarks.

Actually, Turkey’s "rumor mill" in full action made a mockery of such threats and instead held Davutoglu responsible of the disastrous failure of Turkey’s Syria and overall Middle East policy. As a matter of fact, ISIS’s takeover of Mosul has been the continuation of the Islamist extremist organization’s activity in Syria, particularly over the Iraqi lands adjacent to Ninevah (whose center is the city of Mosul) and Anbar provinces. In Anbar, ISIS is already holding the provincial center, Ramadi, and the town of Fallujah — only 60 kilometers (37 miles) away from Baghdad — under its control since January 2014.

The loss of Mosul, without a doubt, will leave a lasting effect on the Turkish psyche, because it is in the national ethos of Turkey that Mosul — and Kirkuk — were unjustly grabbed by Britain from Turkey in the wake of World War I while the borders were being redrawn. Although their irredentist tendencies were restrained, Turks always cared about the destiny of Mosul and Kirkuk.

And right after the fall of Mosul — that is how it is termed in Turkey — to formerly al-Qaeda-affiliated Islamist militants, the next day, June 13, the oil city of Kirkuk, which in the eyes of many Turks is the center of their kinsmen Turkmen, came effectively under Kurdish control, following the retreat of the Baghdad regime’s Tigris Brigade.

Mosul is lost to Islamist extremists and Kirkuk to the Kurds, to be integrated in Kurdistan. The latter are the closest allies of Turkey and, while Ankara did not recover from the trauma of Mosul and Kirkuk seemed to be under the threat of ISIS, Kurds in full control in Kirkuk sounded like welcome news.

The irony is that only a couple of years ago any Kurdish claim on Kirkuk was a red line for Turkey. That was the most sensitive issue. Now, Turkey is not only reconciling itself to Kurdish control over Kirkuk, but it is considering it the best option.

One of the side effects of ISIS’s advances has been the impulse for Kurdish national unity. When ISIS deployed on a diagonal line (known as the “conflicted territories” between the Kurds and the central government) from Mosul to Khanaqin, which includes Kirkuk, and came to within one hour's drive of the Kurdistan Regional Government’s capital, Erbil, all the squabbling Kurdish parties began to join ranks.

They warmed up relations with Syria's Democratic Union Party (PYD), known as the Kurdistan Workers Party (PKK) affiliate in Syria and which had been in conflict with the ruling Kurdistan Democratic Party of the KRG. ISIS is threatening the KDP in the east and the PYD in the west. A statement from PKK headquarters in the Kandil Mountains said PKK’s armed units would join ranks with the peshmerga of the KRG to defend Kirkuk and other Kurdish areas.

Conflicting Kurdish elements now feel that they are under the same threat, but the seemingly irreversible fragmentation of Iraq may help achieve the long-sought Kurdish objective of the establishment of independent Kurdistan.

The fall of Mosul (and also of Kirkuk, in a different sense) has to take its toll. That it hasn’t happened yet is because the developments are too fresh and the fates of Turkish nationals are in limbo. But criticisms were already being voiced that Ankara had been providing logistical support to ISIS militants against Kurds represented by the PYD.

If all the darts will not point at Prime Minister Recep Tayyip Erdogan, the next likely target is Foreign Minister Davutoglu. Rumors have already started that the Mosul episode has ended the premiership dreams of Davutolgu in the event of an Erdogan presidency.

The new geopolitical scene that emerged gave way to comments that a new Afghanistan was born next door to Turkey, and Turkey was assuming the role of Pakistan. One of the most widely shared comments was from the Daily Telegraph:

“The comparison with the terrible mistakes made by Western intelligence agencies during the Afghan war against the Soviets is startling. We supported al‑Qaeda, which later turned on us. Thanks to this policy, Pakistan now faces a permanent terrorist insurgency bordering on civil war. It is very likely that Turkey (and probably Jordan and Saudi Arabia) will face the same problem in due course as a result of the Syrian backlash. Meanwhile, jihadists have found a new terror base from which they can mount attacks on the West. All this was predictable at the start of the Syrian war — indeed, President [Bashar al-] Assad warned of it.”

After the latest developments in Iraq, the Middle East is open to all kinds of new alliances and realignments. The course Turkey will take will be clearer after it gets over the Mosul shock, which will take some time.