The relationship between President Abdel Fattah al-Sisi and Egypt's business community might be undergoing tensions after Sisi declared that businesspeople should donate funds to the state to support the country's economy. 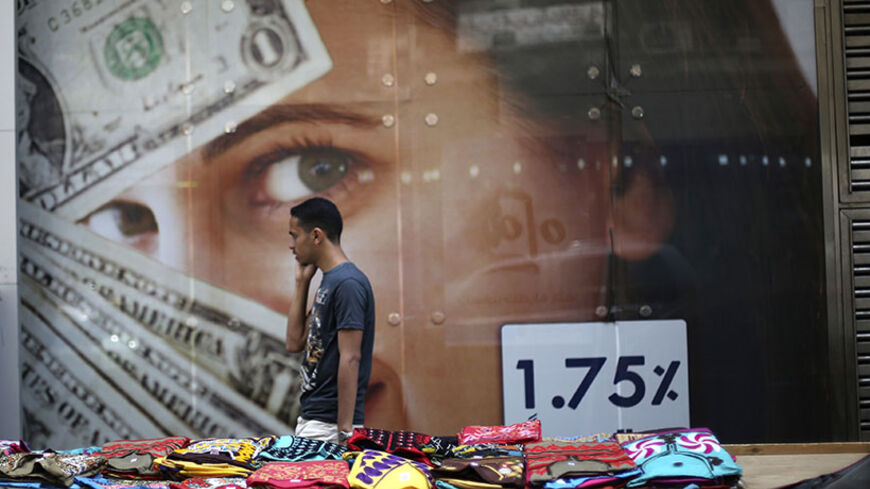 A pedestrian walks past a currency exchange shop and street stalls in Cairo, May 29, 2014. - REUTERS/Amr Abdallah Dalsh

The relationship between Egyptian President Abdel Fattah al-Sisi and Egyptian business leaders remains ambiguous, but there are indicators that suggest tensions between the two or the likelihood of their developing as Egypt works through a period of transition.

As a presidential candidate, Sisi held a May 8 meeting with business leaders at which, according to some media outlets, he asked them to donate 100 billion Egyptian pounds ($13.9 billion) to the state “to support the Egyptian economy.” In a later television appearance on May 18, Sisi confirmed that he had indeed done so. After he was elected, Sisi renewed his call, urging businesspeople to donate to what he called the Long Live Egypt Fund. According to some news sites, including Veto and Wadymasr, the fund has thus far received 9 billion pounds ($1.25 billion), while Sisi has set a target of 100 billion pounds ($13.9 billion).

A reported decision by Sisi to list the names of donors on a monthly basis could be additional proof of tensions with the business community. Sisi's plan led some young politically active Egyptians to declare the launch of a so-called black list — names of business people who have abstained from donating to the Long Live Egypt Fund. The names of donors and nondonors, however, have not yet been released.

In a speech July 28 during prayers celebrating Eid al-Fitr, with Sisi and other leaders present, Mohammed Mokhtar Jomaa, awqaf (religious endowments) minister, declared, “The president has the right to deduct a part of the wealth of the rich who have undermined the rights of the poor.” Later, at the inauguration of the Suez Canal Development Project on Aug. 5, Sisi delivered a speech in which he stated, “Egypt has been very generous with its well-off citizens. You will have to pay no matter what, for your homeland has offered you a lot.”

On Aug. 14, following Sisi’s order to the Legislative Reform Committee to begin its work, the committee declared after its first meeting, “The first reforms to be made will be associated with investments in Egypt.”

Farag Abdel Fattah, an economics professor and member of the political bureau of the National Progressive Unionist Party (Tagammu), told Al-Monitor, “The idea of confiscation (to increase state funding) is unlikely because it would prevent businessmen from investing in Egypt.” This view was seconded by Tariq Mahmood, coordinator of a coalition of political activists supporting the Long Live Egypt Fund. “Egypt is witnessing a state of confusion in its economy and is in need of laws to encourage investments and not ward off investors,” he told Al-Monitor.

Mahmood added that, “There are many files on corruption that are being processed by the coalition supporting the Long Live Egypt Fund to be submitted to the attorney general regarding a number of businessmen, in response to their intransigent refusal to donate to the fund.” He added, “The businessmen’s responses were disappointing. Some of them should know that donating to the fund is an opportunity to mend their ways before opening cases of financial corruption.”

Article 38 of the Egyptian constitution provides for the principle of progressive taxation on income. This means that business people, who constitute the upper class in Egypt, should have tax rates of some 45% per year on income of more than $175,000. According to the al-Messa website, “Progressive taxation rates reached 90% on some social segments during the era of President Gamal Abdel Nasser, which led to businessmen fleeing from Egypt.”

Shamsuddin Noureddin, a leading member of the Businessmen’s Association, told Al-Monitor, “With implementation of the progressive tax under laws that hamper investment, and in light of rampant corruption, any businessmen will find numerous hardships in restoring desert lands, for instance. This will cause the investments of thousands of businessmen to collapse, especially in light of corruption and bribery in government institutions.”

Shamsuddin also stated, “The economic crisis that has hit Egypt over the past three years not only affected the state, but also businessmen, whose financial situation has deteriorated due to the lack of political stability and security.” He continued, “Businessmen are ready to provide support for the state’s economy, but they also need the state to redraft investment laws and provide facilities to investors to alleviate the losses they have suffered during the past three years.”

Muhammad Jad, a journalist and economics expert, told Al-Monitor, “It is difficult to judge whether or not there is tension in relations between Sisi and the businessmen as the state has yet to officially declare a statement in this regard following the donations that have so far been made to the fund. Thus, it is too early to claim that relations are strained between Sisi and the businessmen.”

He further said, “The donations may suggest a floundering situation in the state’s economic policies, as it is unusual for the state to depend on voluntary donations that might be made or might not. On the other hand, these donations may also suggest a positive indication that the state may be cautious in following a defined economic policy during the current period of transition in Egypt.”

Jad also considered, “Implementing progressive taxation does not necessarily mean a cold war between Sisi and the businessmen. It may be a procedure that could temporarily draw their ire, but they will eventually deal with it as they did with the taxes on stock market gains.”