The Egyptian government has upset the local business community with the issuance of regulations for laws imposing a 10% tax on stock market profits and restricting dollar deposits. 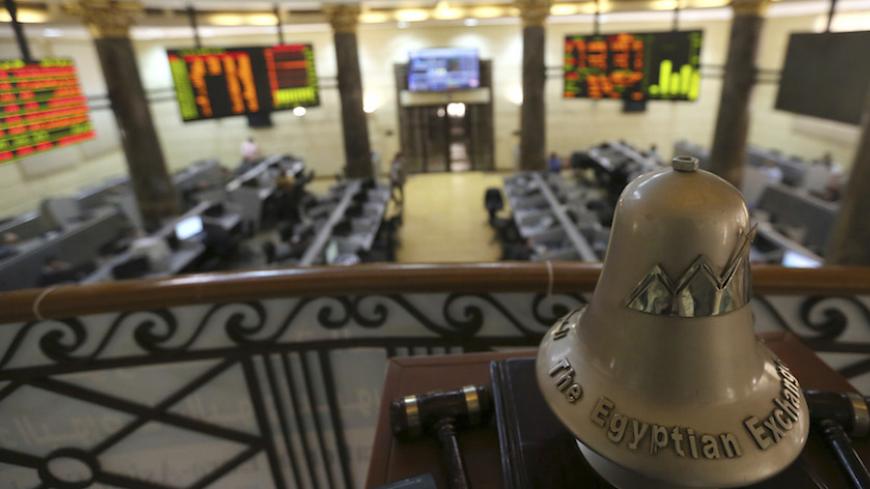 In a move that led to the loss of billions of Egyptian pounds on the stock market, the Ministry of Finance issued implementing regulations April 7 for a law ratified by President Abdel Fattah al-Sisi in mid-2014 imposing a 10% tax on stock market profits for shareholders and speculators. The law had been met with opposition from businessmen and preceded the loss of billions of pounds on the stock market after the government began discussing it on May 31, 2014, until its ratification by Sisi on July 2, 2014. Mohamed Omran, head of the stock exchange board, had issued a statement April 6 calling for postponing the issuance of the regulations for fear of further stock market losses.

A source from the Egyptian Businessmen Association who spoke to Al-Monitor on condition of anonymity expressed his opposition to the new tax law. He said it would serve as a disincentive to investors at a time that requires attracting investments. Awad al-Tarsawi, legal adviser for the Egyptian Association for Financing and Investment, a nongovernmental association of stock market employees, including businessmen, said in an April 15 statement that the association was preparing to appeal the implementing regulations before the administrative court and challenge the constitutionality of the law itself.

Egyptian businessmen, particularly goods importers who deal with foreign firms in US dollars, were also angered by the central bank’s Feb. 4 decision to limit deposits of US dollars by individuals and companies to no more than $10,000 per day and $50,000 per month. Ahmed Shiha, head of the importers’ division at the Cairo Chamber of Commerce, told Al-Monitor that the decision had led to a paralysis in import activities. The decision aims to reduce demand for the dollar, thus lowering its price on the currency black market, which was hit hard by the decision, losing billions of pounds daily because of decreased demand. The move was also designed to slow growth in imported consumer goods.

Economic expert Farag Abdel Fattah expressed his support for the new tax and restrictions on deposits. Speaking to Al-Monitor, he said that all profits should be subject to taxes, including stock dividends, to promote social justice. In addition, he agrees that the limits on dollar deposits will reduce demand for the currency and affect the black market and consumer goods imports as intended. This is particularly so with the central bank selling millions of dollars on March 1 to the banks through the interbank service to cover pending shipping requests by importers of essential goods — pharmaceuticals, raw materials and food — but excluding consumer goods. Abdel Fattah said that this step was taken after the liquidity of the dollar among the banks decreased, about a month after the decision to restrict dollar deposits.

An economic expert speaking to Al-Monitor on condition of anonymity said that responsibility for the stock market losses belonged to businessmen. He claimed that they had gained control of the stock market to a large extent after the January 25 Revolution, when small speculators sold their shares amid fears generated by the political and security turmoil. He said that their control over the market represented pressure they could use against any authority threatening their interests, especially after those affiliated with the regime of President Hosni Mubarak were removed from decision-making circles after the revolution.

He contends that most businessmen are not concerned about temporary losses on the stock market in putting pressure on the state, because they will be compensated when prices rise again. Moreover, such losses do not pose a real threat to a company’s assets, liquidity, production or services, according to the expert.

He ruled out any suggestion that small speculators caused the stock market losses because the law’s implementing regulations exempt portfolios less than about 150,000 Egyptian pounds ($19,657). He said that this exemption would encourage them to hold on to their stocks, not sell them. Also, according to him, the increased rate of sales beyond speculators’ needs was the reason behind the losses incurred.

It is important to recall statements by Minister of Awqaf Mohammed Mokhtar during the sermon of Eid al-Fitr prayers July 28, 2014, when he said that rulers have the right to confiscate the funds of the rich to meet the needs of the poor. The economic expert called on Sisi and the government-affiliated Legislative Reform Committee, charged with amending the country's legislative systems, to speed up passage of a progressive income tax as called for in the constitution's Article 38. Saber Ammar, a member of the Legislative Reform Committee, told Al-Monitor that the issue of a progressive income tax and its relevant regulatory law do not figure on the committee’s agenda for the time being.

There have been concerns that enactment of a progressive tax law will be left to a parliament expected to be dominated by businessmen who are against such a tax and who want to curb Sisi’s economic policies. Legislative elections, in which numerous alliances led or supported by prominent businessmen are expected to compete, have been postponed. Such businessmen include Naguib Sawiris, founder of the Free Egyptians Party; Ahmed Ezz, the leader of the dissolved National Democratic Party (NDP) under former President Mohammed Morsi; and Akmal Kortam, head of the Conservative Party and former NDP member.

According to Abdel Fattah, some of Sisi’s economic decisions have been welcomed among investors, including the Common Investment Law to facilitate additional investments in Egypt. Also in this category are amendments to the Criminal Procedure Law allowing absolution of businesses in cases of embezzling public funds provided the money is returned according to the estimation of a committee of experts under the Council of Ministers.

Even before the amendments to the law, the public prosecutor, Hisham Barakat, had agreed to settle the case of Hisham Talaat Moustafa, a former member of the NDP. Mustafa offered to return 9 billion Egyptian pounds ($1.1 billion) to the state in settling his case involving land confiscation where his company built the suburb of Madinty. The economist Mahmoud Kbeich told Al-Monitor, “The prosecutor has the right to agree to the settlement if the funds are returned, but the amendments were made to set more pronounced regulations for the settlement procedures.”

Ezz is also currently seeking to reach an agreement with the state after waiving the license he had obtained to manufacture rebar during Mubarak's rule. He faces accusations of exploiting his position as a leader in the NDP and as a parliamentarian to illegally obtain the license.

Some newspapers, including Masr al-Arabia and Al-Mesryoon, have quoted anonymous government sources as saying that the government is currently contacting businessmen associated with the Mubarak regime who fled abroad, offering to settle their cases in exchange for their returning the money they are accused of embezzling. This means that such businessmen will likely support Sisi's regime, even in light of unwelcomed economic decisions, if it provides them a chance to resolve their cases and return to Egypt.