As Egyptian President-elect Abdel Fattah al-Sisi prepares to be sworn into office June 8, most citizens expect modest promises in light of the country’s current crises. 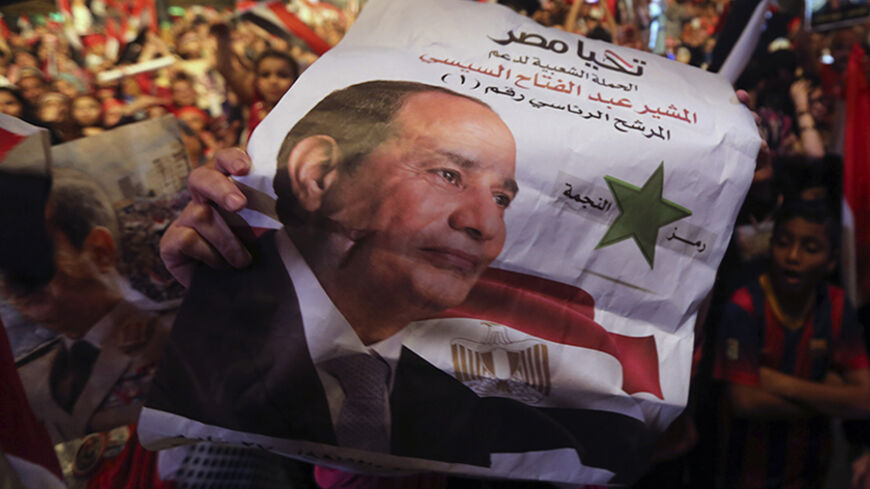 Activists have launched a number of websites under the name "SisiMeter" to measure the success of Egyptian President-elect Abdel Fattah al-Sisi in implementing his promises.

The "SisiMeter" sites are similar to the MorsiMeter website, which was founded by activists in 2012 immediately after the electoral victory of ousted President Mohammed Morsi. Like SisiMeter, the MorsiMeter site measured the extent to which Morsi implemented electoral promises.

SisiMeter.net was launched on May 28, after the third and final day of voting. At this point, indicators emerged that Sisi was ahead of his only rival, Hamdeen Sabahi, by a large margin.

On the SisiMeter homepage, the founders wrote: "It is known that President-elect Abdel Fattah al-Sisi did not provide electoral promises or a program with a time schedule on the basis of which we can hold him responsible. However, everyone is aware of the hopes that a large segment of Egyptians have for Sisi assuming the presidency. Thus, we are opening this website to accept suggestions, demands and realistic expectations for the new president. We will then allow people to vote, from the time he officially takes office until his presidential term ends, to serve as a measure of the achievements of the president."

As of June 6, SisiMeter has recorded 18,000 visitors and received more than 500 suggestions. Furthermore, the official SisiMeter Facebook page had over 1,000 likes and its Twitter account had more than 200 followers.

In an interview with an Egyptian news website, Rami Mohammed, co-founder of the site, said he is not a supporter of Sisi and voted for Sabahi. However, he said this will not affect the site's neutrality.

In a more organized effort — though it received less media attention — other activists launched CiciMeter.com. The site is divided into a number of issues, including education, health, social justice, local affairs and foreign policy. Most of these subpages are full of suggestions, with each classified whether "implementation has begun or not."

Ahmed Abu al-Dahab, a founder of CiciMeter.com, told Al-Monitor his site was established two months before the election to collect suggestions to help the next president administer the country. He said he is a Sisi supporter, and hopes that his experience in office is a success. Likewise, he supported Morsi and wished him success, but opposed him after realizing he "didn't work to support Egypt's interests."

Abu al-Dahab, 35, an architect from the Qaloubia governorate, was arrested twice during the era of President Hosni Mubarak, once being held for a year and a half. He denied he was arrested for belonging to the Muslim Brotherhood.

Abu al-Dahab said that based on suggestions submitted to CiciMeter, the majority of people are awaiting basic economic promises from Sisi during his first speech as president on June 8. These promises, such as restructuring wages, will ease the burden on the poor without costing the state, according to Abu al-Dahab. Suggestions also underscored the belief of citizens that current crises require urgent plans with solutions.

Abu al-Dahab said "urgent plans" do not mean these crises will be solved quickly. Rather, it means that people hope Sisi will announce a timeline to resolve a given crisis, even a long-term plan lasting more than a year.

Farag Abdel Fattah, an Egyptian economist, reiterated the importance of economic promises. He expects Sisi to announce clear features of economic life in Egypt on June 8, including easing the burden on the working class and poor, which is to be carried by Egypt's business leaders and investors. The latter groups benefited from corruption during the eras of Mubarak and Morsi, according to Abdel Fattah.

Al-Monitor met with a number of Sisi supporters in various neighborhoods of Cairo. A student said, "I hope that in his first speech Sisi announces a set of measures or principles to decrease and control unemployment. I hope his promises focus on economic life, using short-term timetables."

Cairo resident Mohammed Abdel Halim, 22, told Al-Monitor, "I am waiting for Sisi to announce the beginning of procedures for development projects. These include development in the Sinai, developing the Suez Canal region, redividing governorates according to the map released by his campaign and linking the Nile and Congo rivers. … Most likely, these projects will require long-term [plans]."

Ahmed Mustafa, 59, the director of marketing for a company in Cairo, told Al-Monitor, "[Egyptians] are awaiting general promises to improve the current situation and that involve showing interest in ordinary citizens. These should be promises in all tracks, including security, the economy and politics, and within a period of no less than two years, as Sisi announced in previous statements."

A doctor and Cairo resident said she expects Sisi to announce long-term promises related to the economy and security.

Afaf al-Seirfi, a housewife, said it is impossible for Sisi to achieve any rapid economic improvement, and his promises must be basic and implemented throughout the duration of his presidential term. What sets him apart from others, she added, is that he hasn't made any promises he is unable to fulfill.

Many Egyptians expect Sisi to make basic, long-term economic promises in his speech. They do not expect short-term achievements, or for Sisi to surprise everyone with a set of decisions that will achieve these promises in complete silence.