Residents of the Gaza Strip cannot ignore the resounding defeat of Hamas, which destroyed their lives without gaining any military achievement. 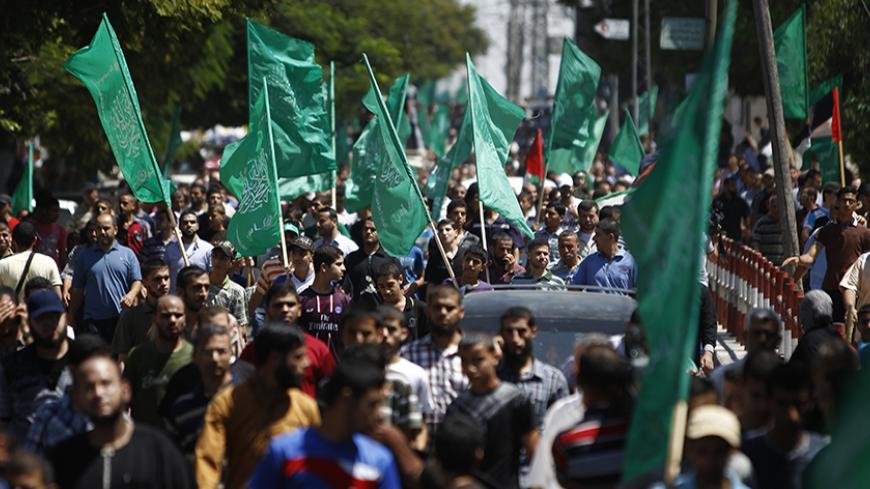 A crowd gathers during a rally in support of Hamas, in Gaza City, Aug. 7, 2014. - REUTERS/Siegfried Modola

On the morning of Aug. 5, just five minutes before the cease-fire in the Gaza Strip was scheduled to begin, Hamas fired a heavy barrage of rockets at Israeli cities. An Indian television crew from NDTV documented from its hotel window how Hamas militants set up a launcher in the heart of a residential area with hotels, and the moments immediately after the rocket was fired. The reporter, Sreenivasan Jain, noted that the footage was only released after the crew left the Gaza Strip out of fear of Hamas' response.

Soon after the rockets were fired and the cease-fire went into effect, Hamas spokesman Sami Abu Zuhri emerged out of his tunnel to deliver his triumphant announcement: “The most obvious result of the campaign [in Gaza] was the destruction of Israeli deterrence.” It is safe to assume that Abu Zuhri and the other leaders and commanders of Hamas, who have spent the past month hiding in bunkers, haven’t yet had a chance to look hundreds of thousands of Gaza residents squarely in the eye. Once they get used to the sunlight again, they should conduct a lengthy tour of the Gaza Strip. While out and about they can ask themselves — and all the local residents displaced from their homes — whether it was worth it.

Let’s say this: If the last barrage of rockets and Abu Zuhri’s statement are indicative of how Hamas anticipates the future of Israel’s power of deterrence, this is yet another fabulous chapter in the history of the Middle East’s fertile imagination. The last barrage was a PR stunt intended to show that Hamas hadn’t surrendered, even though everybody knows it did and that it actually pleaded for an immediate cease-fire. Firing rockets just five minutes before the cease-fire isn’t some sign of bravery; it is simply evidence of how terrified Hamas is of the Israel Defense Forces (IDF). It’s more like a little boy who can see his father approaching. He curses out the neighborhood bully and then goes running into his father’s arms.

Let’s take a look at the facts. Hamas is a terrorist organization that enslaved itself to a culture of death and keeps bringing endless suffering, disasters and tragedies on its people in many macabre ways. Yes, its target is Israel and its people, but a statistical analysis will show unequivocally that the people hurt most by its actions are the people of Gaza. Hamas wanted to attack Israel’s towns with rockets, assault tunnels and mortars, but the actual results on the ground were catastrophic, as far as it was concerned. It cannot claim any achievements. Its fighters were defeated in battle. According to IDF figures, some 900 Hamas fighters were killed. The sick desire to trade in the body of a captive soldier fell apart when faced with a change in attitude among the Israeli public. Israel will not pay an exorbitant price for the body of a dead soldier. The Iron Dome defense system turned Hamas’ rockets into a joke. It took blood, sweat, tears and millions of dollars to build dozens of terrorist tunnels, only to have them destroyed.

As of now, Hamas doesn’t have a single achievement to show the exhausted population of the Gaza Strip. Despite all their intense loathing for Israel, the people of Gaza still realize that what Hamas is saying is little more than pretentious bluster, and that in reality, the defeat was enormous.

Hamas may have rejected Egyptian mediation at the start of the operation, but in the end it succumbed to Cairo. The first Egyptian outline called for an unconditional cease-fire. Only then would the parties enter into negotiations. Israel accepted the Egyptian proposal, while Hamas rejected it out of hand, claiming again and again that there would only be a cease-fire after the siege of Gaza was lifted. After two weeks of fighting, however, the group crawled back to Cairo with its tail between its legs and accepted an unconditional cease-fire.

There will be those who say that in an asymmetrical war against a large national army, any terrorist organization that has not been defeated and is able to get up on its own two feet has achieved a victory, at least in the public’s awareness. I dispute this assumption. If all Hamas wanted was to survive, it never would have started this campaign in the first place. In asymmetrical warfare, there is no such thing as total defeat. There will always be some lone wolf who can fire a mortar from a kindergarten and declare victory. But what kind of victory is that?

It is safe to assume that Hamas got Israel’s message. If you keep digging tunnel after tunnel under homes and neighborhoods, and those tunnels all end up being destroyed, that Sisyphean process will be considered worthless at best, destructive at worst. Going to war against Israel is a painful and expensive venture. Hezbollah already learned that lesson. While it may be building up its forces and becoming more powerful, it hasn’t fired a single bullet at Israel in the eight years that passed since the Second Lebanon War. During the three conflicts between Israel and Hamas, Hezbollah put aside its arms, and it did so even before it got tangled up in Syria. The Lebanese organization did not suddenly become a lover of Zion as a result of the war. It simply got the message. It was made perfectly clear to Hezbollah that any escalation would lead to even worse destruction. This was enough of a deterrence to impact Hezbollah’s craving for war.

Hamas wanted a port, an airport and the opening of the border crossings. So far, it got nothing. The Egyptians have already informed the organization that they can forget about the port.

In a display of hypocrisy, the world chastised Israel and condemned it for harming innocent civilians, even though the only reason civilians were hurt was because of the cruel way Hamas uses its civilians. Nevertheless, it seems that most world leaders recognize that Hamas is the problem. This is true of the Egyptians, the Saudis, the Europeans and the Americans.

Now is the time to rebuild the Gaza Strip. After having invested billions of dollars on the Palestinians, all we can hope is that the Western world and the Arab world alike start demanding oversight on the money they pour into this effort. We must hope that donations earmarked for reconstruction and the well-being of the suffering people of Gaza will not be used to dig new tunnels or purchase new weapons. And it goes without saying that the money should not end up in the pockets of Hamas’ leaders.