Baghdad welcomes Lebanese, but they don't see eye to eye

The Lebanese delegation to Baghdad offers diplomatic help to confront the Islamic State (IS), but it seems both parties have different priorities. 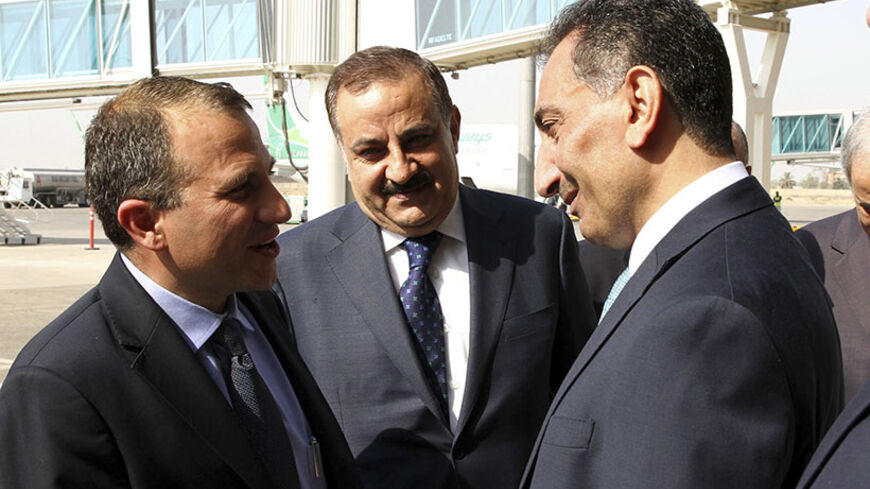 With some frustration and bitterness, the official Lebanese delegation returned from its visit to Baghdad and Erbil a few days ago, on Aug. 20. Led by Lebanese Minister of Foreign Affairs Gebran Bassil, the delegation visited Iraq’s capital, Baghdad, as well as Erbil, the capital of the Kurdistan Regional Government (KRG). The purpose of the visit was to discuss with local authorities the means of providing them with the required diplomatic help to face the Islamic State (IS).

This help is especially crucial after the alleged war crimes and crimes against humanity said to have been committed by this group’s extremist Sunni members in Mosul and the northwest of Iraq as well as in the Ninevah valley, which they later occupied.

A member of the delegation told Al-Monitor, “Matters in Baghdad are at a completely blurry stage,” and, “There are no clear signs concerning the measures that the Iraqi government is willing to take. There is neither a vision nor a plan for how to face IS.”

According to the member of the delegation, the Iraqi officials who met with the delegation said: “All the efforts that are being made in Baghdad today focus on two matters. The first is the formation of a new and an all-embracing Iraqi government, where Sunnis are equally represented. The second is keeping the Islamic State's danger away from the gates of Baghdad.”

The member said, “Other than that, nothing is clear in Baghdad. Certain issues brought up by the Lebanese delegation were seen as irrelevant matters by the Iraqi officials who had different priorities. One of the main issues was the Christians of Iraq and resorting to international humanitarian law forums in order to follow up on it.” However, the member continued, “Officials in Baghdad are not dealing with the issue of IS as an incident which would soon fade away, they are instead acting as if IS is remaining for the short- and medium-run at least. They honestly say that the international support for Baghdad today is limited to providing weapons and war munitions.”

However, the question remains: Who will fight IS on the territory it has seized?

On the one hand, it is certain that no foreign army, especially no Western army, is going to disperse its soldiers across Iraq’s northwestern territories.

On the other hand, Iraqi Shiites are clearly hesitant to fight the Sunnis on their own in Iraq. A few years back, they resorted to the militants of the “awakenings,” Sunnis close to the authorities in Baghdad, or from the Sunni tribes who were opposing al-Qaeda militants in their areas. It was a Sunni-Sunni fight on the battlefield.

However, today, there are no more "awakenings" and Shiites see no point in fighting the Sunnis on Sunni territory. The Shiites prefer to defend their own territory, on the borders of Baghdad, and let events take their course within the Sunni regions controlled by IS, staying away from all internal conflicts or threats of IS expanding south through Anbar, which threatens Saudi Arabia and Jordan.

Shiites believe that only such an expansion could change the regional and international scene. This could lead to the emergence of a foreign party that would be willing to pay the price of the battle, or be willing to accept to assign a foreign army to fight the Iraqi battle.

In this context, the member of the Lebanese delegation told Al-Monitor, “We discussed the theoretical possibilities of such events with Baghdad’s officials, and it turned out that Turkey was the only possibility.”

However, would Turkish armed forces enter northwest Iraq? At what cost? What kind of repercussions could Turkish military interference in Iraq have on the country’s unity, which already seems quite fragile today? What kind of repercussions would such a development have on the power balance in the region? Would Riyadh be content with the regional Sunni role moving to Ankara? No one seems to have the answers to such questions.

As the world awaits, Baghdadis move on with their lives at the same pace they always have: Internal conflicts, conflicts of interests and accusations of corruption by the dozens, with no sign of a powerful Iraqi state being established.

The official Lebanese delegation carried a wish, or rather a proposal, for the authorities in Baghdad to work on attracting the displaced Christians from the regions controlled by IS to regions controlled by Baghdad’s authorities. The purpose of this is to keep the displaced Christians connected to their own country, close to their villages and hometowns, more determined to return to their homes and less vulnerable to complete migration out of Iraq.

However, the Lebanese demands fell on deaf ears, since Baghdad’s priorities seemed to be somewhere else.