Syrian refugees under attack in Turkey

In Turkey's southeast city of Gaziantep, the murder of a Turkish landlord by his Syrian tenant has sparked protests and anti-Syrian violence, and the city struggles to restore calm. 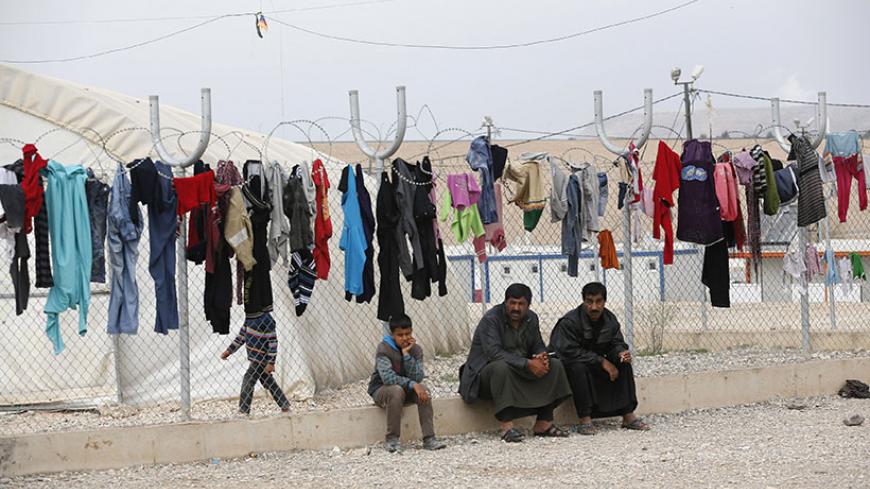 Syrian refugee men sit at a refugee camp in Nizip in Gaziantep province, near the Turkish-Syrian border, March 17, 2014. - REUTERS/Murad Sezer

In recent days there have been reports of horrific incidents in the city of Gaziantep in southeast Turkey, where more than 200,000 Syrians are living. Extreme right-wing groups are hunting Syrians in city streets. When caught, their prey are badly beaten up. The police have stepped up security measures especially in city neighborhoods where such incidents tend to happen most. Gaziantep Mayor Fatma Sahin and civil society representatives have been calling for calm and reason. Most observers say the protests are prompted by increasing rents and unemployment after the arrival of Syrians.

Gaziantep, an industrial city in the southeast that is the hub of most Turkish exports to the Middle East, has been a magnet for thousands of Syrians who fled the war in Syria. Gaziantep always had close family and business contacts with Syria, especially with Aleppo.

According to official records, about 200,000 (but unofficially 300,000) Syrians live in Gaziantep. Rents doubled, then tripled. In the city fringes where minimum wage earners usually live, rents used to be around 150 Turkish lira (about $70) a month. Today they are around 400 Turkish lira (about $185).

None of this justifies the fascist assaults on Syrians in the city. But signs of brewing troubles started about two month ago when social media calls were issued to protest Syrians in the city. Many protest attempts were curtailed by the police before developing into mass public rallies.

The latest escalation began when Turkish citizen Hidir Calar, who lived in the Unaldi neighborhood of the city, asked his Syrian tenant to move out. Calar was stabbed and killed by his tenant, along with other people. The initial tension was controlled by the intervention of police using pepper gas and water cannons. But the next day around noon, protests erupted again, and people saying they didn’t want Syrians in the Unaldi neighborhood assaulted two Syrians they caught on the street. There were attempts to destroy some of the workplaces owned by Syrians.

The tension spread to other neighborhoods in the evening when groups of people armed with sticks, knives and machetes marched, shouting anti-Syrian slogans. The number of protesters grew as more people joined along the way. They attacked Syrians they encountered in the streets and those living in the parks; 13 Syrians were injured, four of them by stabbing, and evacuated to city hospitals. Groups which were forcefully dispersed by the police regrouped in other streets and continued with their protest marches. They inflicted major damage on cars with Syrian license plates they saw along the way. Some Syrian vehicles were set on fire but they were put out by compassionate local residents. Police detained 17 people accused of provoking the protesters and deployed armored police units in the most tense streets.

The next morning the city tried to clear the traces of violence by removing the damaged vehicles. Local residents did not want to talk to reporters while the Syrians who were living in the parks were seen moving away.

The police stepped up their presence not only in the tense areas, but also in other locations where Syrians live in large numbers and in the city center, including the parks where homeless Syrians spend the night.

Security forces discreetly removed from their homes Syrian families they felt were targeted by the protesters and resettled them at hostels and guest houses of official organizations, with plans to send them on to tent and container camps in the vicinity.

Meanwhile four out of six suspects involved in the killing of Hidir Calar were being questioned by the police, who were searching for the two others still missing.

Mayor Sahin called on citizens to be calm and to use common sense. She said what was going on was a passing incident and accused some people of provoking the same residents who had opened their arms to Syrians for three years. Sahin said, “People took refuge in our city to protect their lives and their families after the civil war in Syria. It wasn’t their choice but an existential necessity. They took refuge with their neighbors they saw as a safe port. Being neighbors is a sacred relationship according to our beliefs. We are making massive efforts to enable them to live on their own land in peace. We want our Syrian brethren to have a place where they can live in Syria. What is happening is exceptional and we are trying to overcome it with minimum damages and problems. As it happened in the last two days, sometimes unpleasant incidents occur. It is not acceptable and reasonable to cast the blame on the local society as a whole or on Syrians as a group whenever something unpleasant happens. Of course, we are saddened by the incident between the landlord and his tenant. We are doing our best to prevent such incidents. It is not in our traditions to be prejudiced against anyone who asks our help, who seeks refuge with us and make their life even worse.”

Sahin said some of the Syrians in Gaziantep will be transferred to the a new 25,000-person capacity camp at Islahiye. She said if necessary a second camp will be prepared.