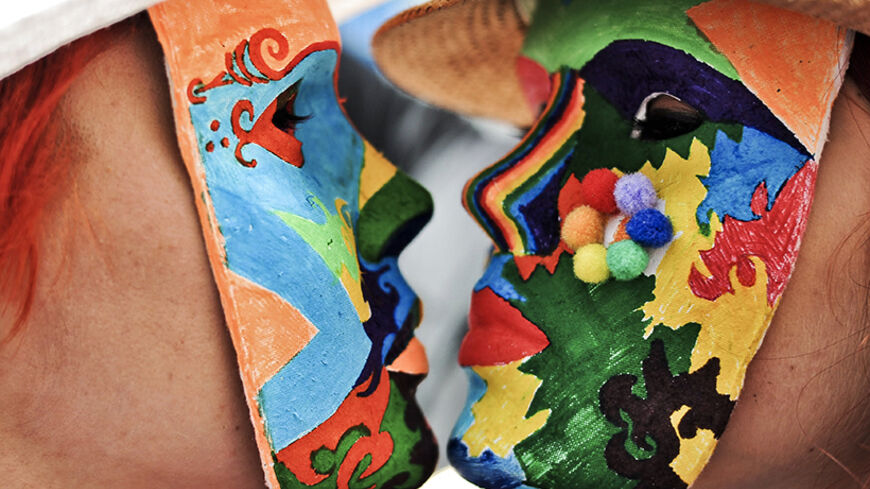 Masked women face each other during a gay pride parade in Istanbul, June 29, 2014. - OZAN KOSE/AFP/Getty Images

Turkish Prime Minister Recep Tayyip Erdogan’s Aug. 3 rally in Istanbul marked a first for the country: LGBT supporters of the ruling Justice and Development Party (AKP) waved the rainbow flag at the rally in a show of support for Erdogan’s presidential bid.

The group, using the Twitter handle Aklgbti, shared pictures from the rally with the following message: “The homosexuals stand with Tayyip Erdogan. We are at the rallies, we are everywhere — get used to it.” A member of the group tweeted, “I waved the rainbow flag in the front rows. Our prime minister must have seen it.”

It was a truly intriguing scene, which Western analysts of Turkey may find difficult to comprehend.

The rainbow flag was first seen fluttering next to AKP members at the inauguration ceremony of the Ankara-Istanbul high-speed train on July 25, which Erdogan attended.

AKP’s former minister for family and women’s affairs, Selma Aliye Kavaf, angered the LGBTI (lesbian, gay, bisexual, transgender and intersexed) community in 2010 when she said homosexuality was “a disease that needs to be cured.” AKP lawmaker Halil Urun, for his part, said, “What does LGBT mean? I don’t know. How am I supposed to know? We are ignorant on this issue.”

Uniting, AKP’s LGBTI supporters aim to break the prejudice in rightist and conservative quarters against LGBTI individuals. The “Pro-AKP LGBTI individuals” group, created on social media on March 30, has 937 followers at the moment.

In an interview with the liberal daily Milliyet, the group’s founder, identified only as Kerem, said: “There are people in our group who are highly influential within the AKP. In the days we created the group, we received a congratulation message from an AKP mayor. And we are in contact not only with the AKP. We have received support also from other LGBTI groups such as the LISTAG group [of families of homosexuals], Hevi LGBTI and the Istanbul LGBTT Solidarity Association. As a homosexual who votes for the AKP, I have been offended and saddened by statements AKP lawmakers make. Hence, our goal is to change the perceptions of rightist and conservative quarters who think likewise. People hostile to LGBTI individuals exist in all parties, LGBT-phobic people exist among the conservatives, too.”

That conservative homosexuals got organized via social media after the March 30 local elections and were attending AKP rallies brandishing the rainbow flag comes as yet another indication that Turkey has a complex society that cannot be understood with clichés.

Melih Neseli Gunes, one of the pioneers of the AK LGBTI group, is in a way the leader of this Islamic LGBT movement in Turkey.

In remarks to the Taraf daily, Gunes said they never gave credit to the corruption accusations directed at Erdogan. “We can only accuse him of stealing our hearts,” he said. Gunes explained their group was first launched on Facebook by three people who rejoiced at the AKP’s victory in the March 30 elections, including himself. The group quickly attracted close to 1,000 people, among them doctors, lawyers and imams, he said.

The members of the AKP LGBT group have a great affection for Erdogan. They argue that pious people, Kurds and non-Muslims have all acquired greater freedoms under Erdogan, and believe he is the only leader who can make LGBT individuals freer, too. They are fully confident that Erdogan will undertake LGBT reforms when the time comes.

Yet, they are strongly critical of the AKP’s current LGBT policies. Their objective is to transform the AKP. They say they are not in a hurry, given that even the settlement of the headscarf problem took 10 years.

In remarks to Taraf, a publication which is an avowed Erdogan opponent, group members say it was under the Justice and Development Party that they became able to walk hand-in-hand with lovers in the streets. They see Erdogan as a conservative leader who is libertarian at heart, and believe all social groups will acquire full freedom under Erdogan in the 2014-2019 period.

Gunes argued that a gay pride march would have been unthinkable before Erdogan, whereas today homosexuals hold marches to freely express their identities. “Certainly, the homosexual struggle [for rights] has contributed enormously to the greater freedom homosexuals enjoy today. The government, however, could have taken harsher measures on the issue had it wished so. But it didn’t,” Gunes told Taraf.

The main criticism the group faces is the argument that homosexual and pious lifestyles cannot go together, Gunes said. “Leading a homosexual life may be a sin, but many people are drinkers even though they know alcohol is a sin. What matters is the faith. The tribe of Lot was cursed for perversions such as the rape of children and animals rather than for homosexual sex,” he said.

Asked how they were received at Erdogan’s rally, Gunes said: “The police thought we were Gezi Park activists and mistreated us. Some people mistook our flag for the flag of the PKK [Kurdistan Workers Party]. After we explained who we were, there were only chuckles. In the meantime, however, we met fellow LGBT individuals [who approached us] when they saw us there. We waved our flag right before Erdogan’s eyes. He saw the flag, but said nothing and only smiled. We take it as a positive sign that he said nothing. Thus, we will now keep up the struggle. One of our main projects is to save conservative homosexuals from the environs of ill-minded LGBT people.”

Western observers of Turkey should know that Turkish society is a diverse, multicolored one. Turkey is not a country that clichés can explain. That Islamic LGBT individuals are openly expressing themselves and getting organized to press Erdogan for homosexual rights is yet another indication of Turkey’s complexity.