Little protection for gays in Jordan

Although Jordan is one of the few Arab states to have decriminalized homosexuality, discrimination and harassment remain common in the conservative kingdom. 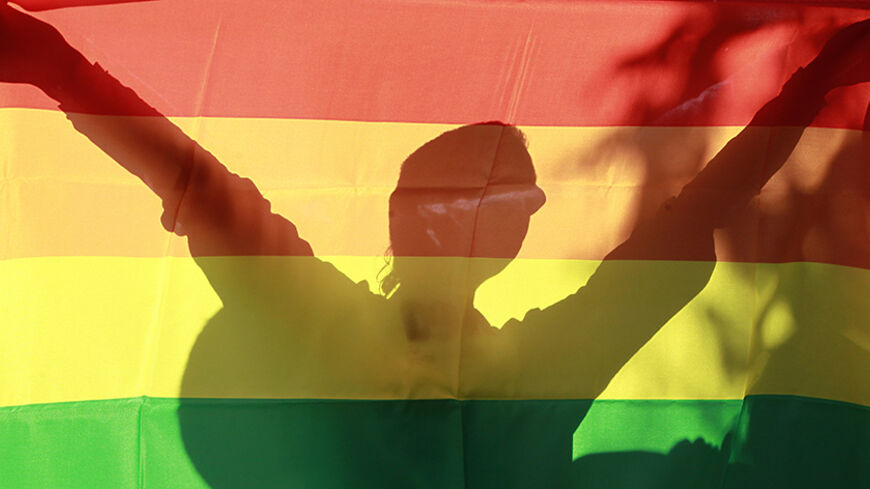 The shadow of a gay rights activist is seen behind a flag, May 25, 2013. - REUTERS/Gleb Garanich

AMMAN, Jordan — When Hassan Zeid first told his family that he was gay, the reaction was swift. His mother promptly kicked him out of the house, telling Zeid, “I am not going to have a gay son.” Forced to sleep at a motel where he was working at the time, Zeid admitted to Al-Monitor that his situation was “quite hard.” He needed to postpone his studies as he suddenly lost the means to pay for his higher education. Zeid's struggles living as a gay man in Jordan are common in a deeply conservative society and with a government unwilling to take a more active stance on this taboo issue.

Al-Monitor spoke to Musa Shteiwi, director of the Center for Strategic Studies at the University of Jordan, who explained, “Culturally speaking, this type of sexual behavior is not accepted in the very conservative society in Jordan. People think that they have a lot more serious issues in the country, and the government should pay attention to those matters. It would be politically costly for the government to act on this issue.”

Jordan is one of few countries in the region, along with Bahrain, Iraq and Israel, where homosexual acts are not criminalized. The Jordanian government also tolerates a few cafes in Amman that are widely considered to be gay friendly. However, no anti-discrimination law specifically protecting the LGBT community has even been passed and the relationships of same-sex couples are not officially recognized.

One parliament member, who insisted on remaining anonymous due to the sensitivity of this issue, told Al-Monitor that if parliamentarians publicly defended gay rights, “they would lose their audience and supporters. Jordanian society, as any other Muslim and Arab society, considers this issue anti-religious and immoral. That is why any politicians would think twice about supporting this issue.”

According to the US State Department 2013 Human Rights report on Jordan, many LGBT individuals face discrimination in housing, education and employment. When considering whether to use the legal system to achieve justice, some hesitate, as their sexual orientation would lead to antagonistic reactions from the police or be damaging to a court case. LGBT activist Maidan al-Jazerah told Al-Monitor, “In many cases, transgender persons stop themselves from filing suit out of the fear of being treated unjustly and harassed for the way they look.”

Yet, even the law cannot protect gays and lesbians from occasional arrest and harassment. In February, the police arrested 10 homosexual men for having a party in east Amman. A security official defended the arrests, which were conducted “to prevent a disturbance of the peace, after they held a reception at a party hall to get to know each other.”

Zeid also emphasized the economic component of the issue. In Jordan, many young adults in their 20s live with their parents due to the high cost of living. Eviction from home means those with limited financial means will struggle more. In these difficult cases, Zeid reported some gay men resort to dire means. “We have even found some male prostitutes because they need money. If you were rejected from your house and have no education or association to protect you, where will you go?”

Zeid would like to see the establishment of an official gay organization. This would make it easier to receive support from nongovernmental organizations (NGOs) and private donations to fund their projects, along with better publicity for their cause. However, in 2009, the Ministry of Social Development rejected their petition. Ministry official Ibrahim Tamimi explained that if the government authorized such an organization, it “would violate the public morals and decency.”

The media also reflects the conservative nature of Jordanian society. When describing gays or lesbians, the press often uses the condescending term "shath," deviant, instead of more neutral terms. After a group of Jordanians attempted to register a gay group with the government, many media outlets ridiculed the move. One headline read: “Registration for sexual deviants is an abominable crime against the rights of society and religion.”

“When it comes to these kinds of issues, the media takes into consideration how it will be received by society, and it is not considered a battle they want to fight,” explained Shteiwi. “Society also views the focus by international organizations on these issues with suspicion.”

Discussing the issue of gay rights is challenging, even for those interested in depicting the issue in a more nuanced manner. “The few journalists who are trying to follow up on this topic from a human rights perspective couldn’t find human rights activists and NGOs who were willing to defend this group on the record,” Sawsan Zaideh, a media affairs analyst at Beled Radio, told Al-Monitor. Zaideh also noted that the majority of reporting on this issue is “sensational,” highlighting the sexual nature of the story and enticing readers to consume the story like “pornography.”

In a society with a strong tribal identity, Jazerah cautioned, “If the family is very conservative, the issue of honor kicks in.” The notion of honor is so important in this environment, homosexuals can be especially vulnerable to tribal attack.

While acknowledging that homosexuals are treated worse in certain other countries in the region, Zeid repeatedly emphasized that there is no anti-discrimination law protecting the LGBT community from the societal pressures against being gay. He said, “We are human beings and we don’t have to compare ourselves to the situation around us. We should have the same rights as other people in Europe.”