Now that the White House policy of scrutinizing arms shipments to Israel is out in the open, Israel might begin to understand the price it will pay for rejecting a diplomatic process with the Palestinians. 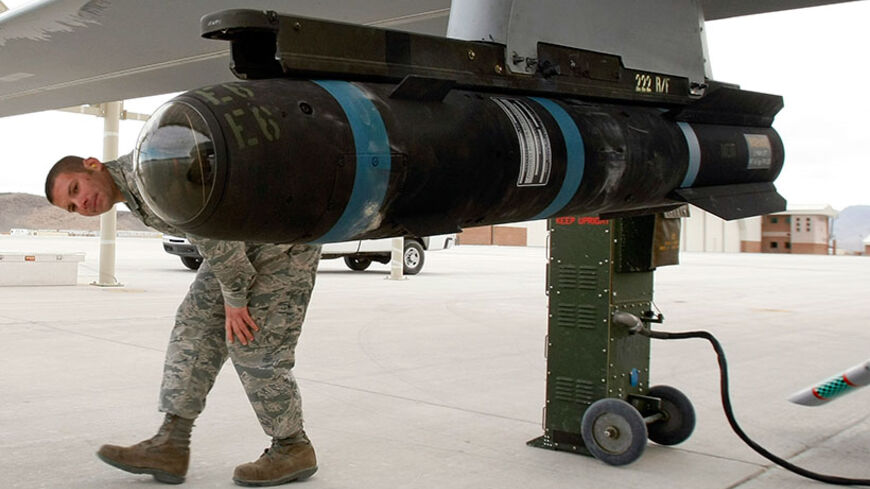 The United States has decided to delay the shipment of Hellfire missiles intended for use by Israel on Apache helicopters. The timing of this news hitting the headlines on Aug. 14 was reminiscent of the first days of the Yom Kippur War, in early October 1973. Then as now, a crisis with the United States erupted while the Israeli public and American Jewry stood in support of the government of Israel, the soldiers on the front lines, and Israeli citizens behind the lines. Then, as now, Washington used a weapons shipment delay to express its discontent with Israeli government policies.

As The Wall Street Journal reported, the transfer of anti-tank missiles intended to penetrate heavy armor was postponed on the grounds that the deal was struck behind the White House’s back. On the other hand, however, the citizens of Israel have come to expect that a true friend in the United States would not be so petty when people living in the south are under rocket fire. Even in times of peace, any harm done to the security of the state, even indirectly, including criticism of Israel, is considered a stab in the back of the entire nation. All the more so, when Hamas is firing rockets at the center of the country and bloodthirsty terrorists are digging tunnels beneath their children’s bedrooms.

It is too early to tell whether the Aug. 1 bombing of the Rafah region that left an estimated 130-150 Palestinians dead was the reason for the shipment’s delay. It may have been in response to the way US Secretary of State John Kerry was humiliated or the fact that the United States was removed from the negotiations to end the conflict in Gaza. One serious indication can be found in a stinging comment by a US official that Israel is pushing the United States aside while at the same time asking it to provide security guarantees. Regardless of the actual reason, White House sources say the missile shipment was not delayed for purely administrative reasons. One senior White House official stated, “The notion that they [our 'friends'] are playing the United States, or that they’re manipulating us publicly, completely miscalculates their place in the world.”

Much to everyone’s surprise, the decision to put a hold on the missile shipment in the middle of a war did not result in demonstrations outside the US Embassy or the White House. The leaders of the pro-Israel lobby AIPAC would not normally hesitate to attack the administration directly and sic various members of Congress on it, but for now they are being conspicuously silent. Under ordinary circumstances, these same lobbyists would have recruited all their forces on Capitol Hill to attack the White House, even for the slightest hint of criticism of Israel. This time, however, they are holding back from attacking what looks like sanctions in one of the most critical areas of Israeli-US relations. It cannot be emphasized enough that this is happening less than three months before congressional elections, a time when candidates traditionally vie for the Israeli lobby’s support. A recent announcement on the powerful organization’s website applauds the Obama administration and Congress for deciding to provide Israel with additional aid amounting to $225 million to fund the Iron Dome air defense system.

It seems as if Prime Minister Benjamin Netanyahu, who has excelled in face-to-face clashes with US President Barack Obama until now, has finally realized that he has overstepped his boundaries with the American leader. Netanyahu instructed his ministers and advisers to tone down the rhetoric and told his spokespeople to kill the crisis while it remained minor. Thus, for instance, spokesman Mark Regev told Joe Scarborough on MSNBC, “People have different opinions, different policies. People don’t see eye to eye on every issue, … but we agree on much more than we disagree.” Regev went even further by turning the missile shipment affair into proof of the excellent relations between Israel and Washington. “Israel and America are so close, so when we have a disagreement of course it's front page news,” he said.

Two senior ministers refused to obey Netanyahu and stated publicly that the prime minister was leaving Israel without the support of its closest friend and ally. Yair Lapid, chairman of Yesh Atid and finance minister, told the media that the delay in shipping the missiles was “a worrisome trend that we must not allow to continue. Relations with the United States are a strategic asset that must not be harmed.” Hinting at US claims that Netanyahu had been ungrateful toward Obama, Lapid said, “Sometimes, one needs to know how to simply say thank you and make sure that the relations with the United States continue to be this strong friendship, which is so important to the State of Israel.” At an Aug. 7 Cabinet meeting before that, Lapid accused Netanyahu of acting clumsily toward the United States and even of causing critical harm to Israel’s relationship with the superpower.

The head of the Hatnua Party, Justice Minister Tzipi Livni, also pointed an accusatory finger inward rather than at the United States, saying on Israeli public radio Aug. 14 that “personal remarks” against senior American officials that originated in Israel have sullied the country’s relationship with the United States in wartime. The justice minister even made a stinging comment about Netanyahu, saying, “Of course, some Israelis are very happy to see someone standing up so stubbornly to the United States,” before concluding, “They just don’t realize how much it will cost us.”

As a former foreign minister, Livni is well aware of the diplomatic cost that a lengthy crisis in our relationship with the United States would have. The finance minister’s advisers explained to him the economic cost of a crisis in the relationship with the United States (running parallel to increasing sanctions pressure from Europe and internal pressure on the Israeli economy as a result of Operation Protective Edge). Both ministers understand the political price they will pay for remaining in a government dragging Israel toward international isolation.

The missiles issue and Netanyahu’s entanglement in Gaza offer the United States a unique opportunity to pressure Livni and Lapid toward a moment of truth. This is their moment. The United States must act now, no later than the day after the Nov. 4 congressional elections, to submit to the UN Security Council a binding and updated version of UN Resolution 242 based on the Arab Peace Initiative and the Clinton parameters. Someone who shows no concern for security sanctions against Israel in wartime should not shy away from a diplomatic move, and especially one so called for. For many long years (too long, in fact) the world’s greatest superpower has inflated Netanyahu as if he were an enormous lion. As we are now finding out, he is not much more than a scarecrow.