While the peace process has taken a major hit from the war, the survival of the Palestinian unity government is a victory of sorts for the Palestinians. 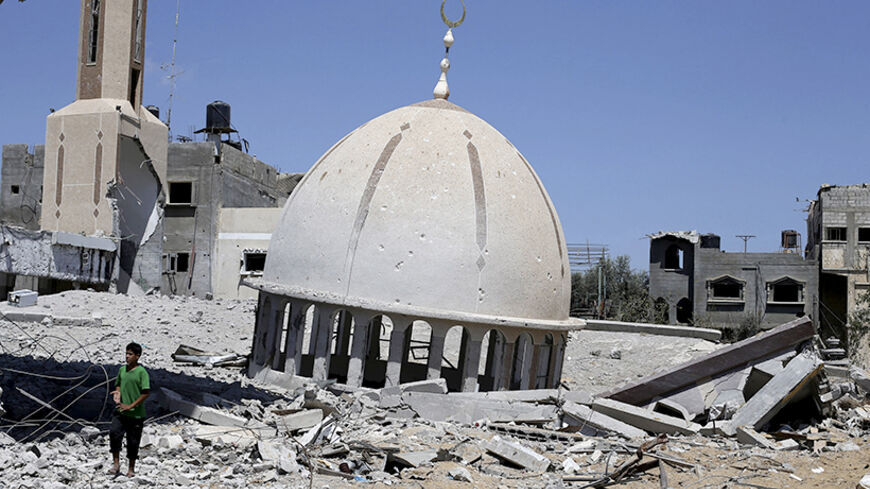 A Palestinian boy stands next to the remains of a mosque in Khuzaa town, east of Khan Yunis in the southern Gaza Strip, Aug. 6, 2014. - REUTERS/Ibraheem Abu Mustafa

While the war on Gaza is still not officially over, it is possible to draw some early conclusions.

At this moment, the two protagonists, Israel and Hamas, seem to have reached little more than a draw. Neither side has accomplished what it publicly set out to do. Israel said its aims were to stop the rockets and later added the goal of destroying the tunnels. Until the very last minute before the beginning of the cease-fire, Hamas and Islamic Jihad were clearly not ready to permanently halt their rocket launches. Twenty-six rockets were launched 10 minutes before the cease-fire and a statement by Hamas’ military wing vowed to continue rocket attacks if Israeli aggression continues. And while Israel says it destroyed all the "known" tunnels, few in Israel believe that the tunnel issue has been adequately addressed. There is also no reason to expect that Hamas and others will not dig new ones.

Despite its rhetoric, Hamas can’t declare victory yet, either. The cease-fire might stop the Israeli shelling, but ending the Israeli siege on Gaza has not been accomplished. Hamas was forced to accept an Egyptian proposal it had rejected a few weeks earlier.

If neither Israel nor Hamas accomplished their objectives, who were the winners and losers in this monthlong war? No doubt the innocent hundreds of Palestinians, entire families who perished, were the true victims. The Palestinian Health Ministry estimates that nearly 1,900 Palestinians, most of them civilians, were killed and over 10,000 injured. Homes and schools were destroyed. While the latter can be rebuilt, the lives taken are gone.

A major loser has been the peace process. Israel's brutality has turned off many Palestinians, including some who until recently still believed in peace. Their loss of faith in the peace process is not simply due to Israeli brutality, but also to the evidence that violence can produce what negotiations have failed to deliver. Even though it has been at a very high cost, Gazans can claim that with their resistance, they forced the Israeli government to take their demands seriously, something that President Mahmoud Abbas and the Palestinian negotiators have failed to accomplish.

While conflicts are generally resolved at the negotiation table, the Palestinian resistance has shown that bargaining power is much stronger during resistance. The chief loser, therefore, in the latest onslaught in Gaza has been the peace talks and Abbas, whose negotiating team failed to produce results in the talks.

If Hamas and Israel came to a draw and the peace process is the major loser, who won?

Some Palestinians are arguing that Palestinian unity has come out as a big winner. The sight of a joint Palestinian delegation traveling to Cairo to negotiate the terms of a permanent cease-fire agreement is a new thing. Hamas, which opposes any negotiations with Israel, for the first time accompanied Fatah leaders and independents in indirect talks with Israel. In practical terms, the Palestinian unity government, which Israel had vehemently opposed, has emerged as the only acceptable vehicle for all sides — now including Israel — to carry out the badly needed reconstruction of Gaza. What started out in part as a war against Hamas and the national unity government it created with Fatah has now ended with the very same government bolstered. By talking to the unified Palestinian delegation, even indirectly, Israel has paved the way to a possible legitimization of the Islamic movement. While Israel will not soon recognize Hamas, the movement will be strengthened by calls by former US President Jimmy Carter for the West to recognize Hamas.

War is a terrible thing, and there are no real winners. Politically, the current war has resurrected an Islamic movement that had nearly surrendered politically and was financially bankrupt. The pain and suffering that the people of Gaza have gone through will not be healed in generations. And while Hamas might be enjoying short-term popular support, it is unlikely that this support will translate to votes if and when elections take place. Abbas, 79, who has vowed not to run for president again, will certainly not do well if he changes his mind. The time is therefore opportune for a new forward-looking leadership to emerge that can finally answer the Palestinian people’s aspirations for freedom and independence.