What made Abbas change position on Gaza war?

Palestinian President Mahmoud Abbas surprised many, including his Palestinian critics, when he publicly expressed support for armed resistance against Israel in Gaza. 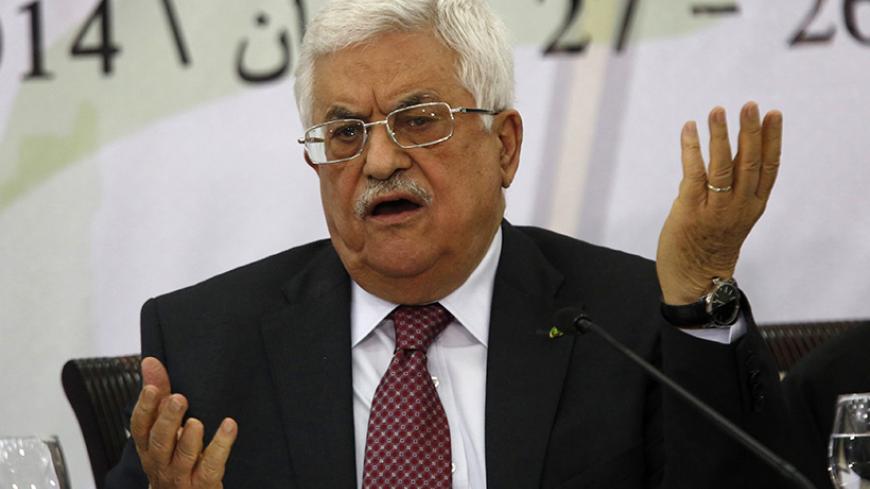 There is little doubt that Palestinian President Mahmoud Abbas was not a fan of Hamas’ strategy and actions when the current war on Gaza began. There is also little doubt that Abbas has made a major change that was reflected in his speech in Ramallah on July 23 to members of the Palestinian leadership that brought him praise from even Islamic Jihad.

Up until this important speech, the Palestinian leader felt ideologically and politically distant from Hamas and its “resistance” creed and action. Abbas at one time convinced Hamas’ leadership to publicly support “popular resistance” as the preferred way to liberate Palestine. In translating his philosophy, Abbas saw in the Egyptian proposal for a cease-fire a way out of the killing and a return to negotiations. Abbas, who has had a hard time creating chemistry with new Egyptian President Abdel Fattah al-Sisi, accepted the cease-fire formula that the Arab League — and later the United States and Israel — had also approved.

Abbas’ change was made after he canceled a planned visit to Saudi Arabia and coincided with the empty-handed departure of US Secretary of State John Kerry. One tweet from an American Arab leader, Yousef Munayer, joked that Kerry bought a T-shirt in downtown Cairo that read: “I came to Cairo and all I got was a 12-hour cease-fire."

In his meeting with the Palestinian leadership, Abbas’ change of mind was clear in both text and tone. In his July 23 speech, the Palestinian president said: “It is time that we all raise our rightful voices in the face of Israel’s killing and destruction machine. Israeli forces have crossed all lines and broken all international laws and humanitarian values with the utmost brutality. We know we do not have planes or artillery tanks, but what we have is stronger than this firepower and arrogance. We have the strength of righteousness and justice.”

Abbas Zaki, a senior member of the Fatah Central Committee, told Al-Monitor that Abbas didn’t make a major change, because he has always demanded freedom of movement and the lifting of the unjust siege on Gaza. “Initially, Abu Mazen thought that these goals would be accomplished through diplomatic means and therefore he supported a cease-fire that would save lives.” Zaki said, however, that the president came to see that the cease-fire agreement was meant to stop resistance without any relief to the major problems facing Gazans. “It became clear to him that despite the good intentions of the Egyptians, none of the changes regarding lifting the siege would be accomplished,” he told Al-Monitor by phone from his home in Hebron.

“After 20 years of talks without any progress on the ground, he can easily tell when a party is serious or not,” Zaki said, referring to the Palestinian president. The Fatah leader said that Abbas was hoping for the cease-fire agreement to produce genuine results. When the United States and Israel were not forthcoming, “he had little choice but to support wholeheartedly our people’s heroic resistance.”

The senior Fatah leader, who in the 1980s was deputy to the late Khalil Wazir (Abu Jihad) for the western Palestine front, said that his movement has always believed in the resistance, but that we were hoping that progress could be made on the negotiations table. Zaki, a former Palestinian ambassador to Lebanon, said that the success of the resistance in Gaza has brought back memories of “the days of the Karameh [Jordan] and Lebanon, and the glorious intifada.” Zaki said that the success of the Gaza-based resistance has brought “balance between both sides,” and therefore the days when the Israelis can act alone with impunity against our people have ended.

Other reasons for the change of mind of the Palestinian leader have had to do with regional relations. Abbas’ tricky relations with Sisi have been hampered by the latter’s demand that Abbas bury the hatchet with former Fatah leader Mohammed Dahlan. The issue, apparently under pressure from Dahlan’s new friends in the UAE, caused the Egyptian president to refuse a request by Abbas for a meeting in the first days of the war on Gaza. Sisi made it clear that the issue was being handled by the Egyptian intelligence services and that Abbas would need to talk to them about Gaza. Rumors that Abbas had agreed to a secret meeting with Dahlan were quickly denied by Palestinian officials.

Some news reports have argued that the change was a result of Abbas’ meetings in Doha with Hamas’ political bureau chief Khaled Meshaal and Qatar’s Emir Tamim bin Hamad al-Thani. The reports indicate that Qatar made financial promises to the Palestinian unity government, which would help cover its shortfalls that have resulted in part because of Abbas’ refusal to reconcile with Dahlan.

Palestinian sources in the PLO and within Fatah were unable to pinpoint to Al-Monitor any single reason for Abbas' change of heart and position, concluding that a number of issues were responsible. But most noted that the success of the resistance on the ground, and the continued Israeli rejection to lift the siege as part of a cease-fire agreement, pushed Abbas to change course and support the demands of the fighters in Gaza.