No end in sight for Islamic State’s attack on Iraq

In addition to targeting Shiites and religious minorities, the Islamic State are also threatening Iraq's Sunnis. 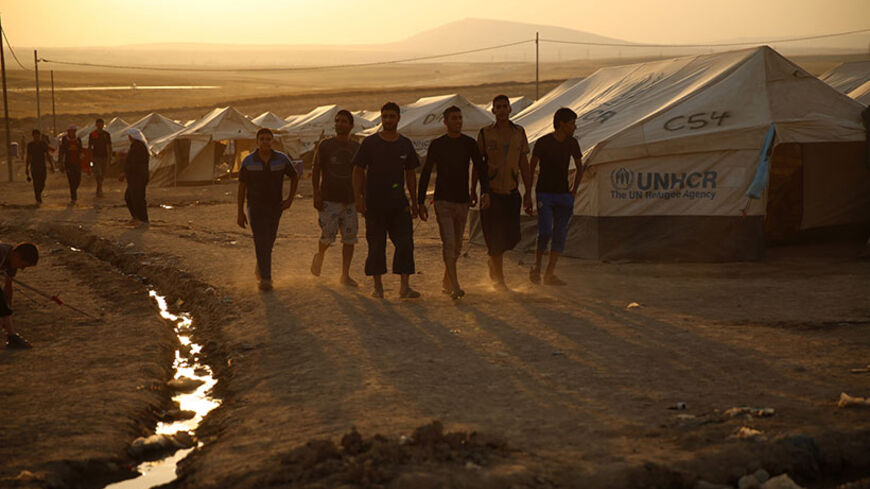 Iraqi refugees who fled from the violence in Mosul walk during sunset inside the Khazer refugee camp on the outskirts of Erbil, June 27, 2014. - REUTERS/Ahmed Jadallah

The conflict in Iraq is usually depicted as exclusively involving the Shiite government and Sunni armed groups. However, this stereotype is shattered when observing the situation of Sunnis in areas controlled by the Islamic State (IS).

One quarter of Mosul’s residents have fled the Sunni-dominated city. Moreover, hundreds of Sunnis were killed by IS. Considering this, the conflict can be seen in a different way, since these practices are equally carried out in the Syrian and Iraqi areas controlled by IS.

In the Syrian city of Deir ez-Zor, adjacent to the Iraqi border, the organization has killed in the past two weeks more than 700 individuals belonging to a Sunni tribe, the majority of whom were civilians. The Syrian Observatory for Human Rights announced that 17 fighters of other Sunni opposition factions were beheaded at the hands of IS in the village of Akhtarin, which fell under the control of the organization.

In Iraq, the Sunni town of Haditha in Anbar has been fighting off the successive attacks of IS for more than a month. A source in the city told Al-Monitor by phone: “The residents of Haditha are moderate and do not agree with the terrorist doctrine of IS. They are sacrificing all they have to preserve their cities from the monsters of this organization.”

It seems to be a trend. Upon entering a city, IS looks for Sunni oppositionists and exterminates them. This includes whoever works or cooperates with Sahwa (Awakening) and state forces, in addition to clerics, preachers and imams who prohibit the joining of the organization and consider its practices to be religiously illegitimate.

Such aggressive behavior is based on the extremist Salafist doctrine of the organization that does not differentiate between Shiites and Sunnis who do not abide by the Salafist school of thought. Both, according to this narrow vision, are considered apostates. Even other Salafist doctrines, such as Wahhabism, which is Saudi Arabia’s dominant faith, fall under this category. IS believes that Wahhabism has deviated from the right path of Salafism, and that the political and religious rules in Saudi Arabia are illegitimate. This is why Saudi Arabia’s Grand Mufti Sheikh Abdulaziz Al al-Sheikh issued a statement on Aug. 9 branding the “Islamic State and al-Qaeda apostates,” and calling on all Muslims to unite to fight this extreme doctrine.

Many displaced Sunnis have found refuge in Shiite cities in southern Iraq. The city of Nasiriyah hosted scores of Sunni families that came from Mosul after it fell under the control of IS. A Red Crescent source in the city told Al-Monitor: “The displaced belong to different religions, sects and ethnic groups. So, their belonging is not the reason behind their displacement and it does not affect the services provided to them by governmental and civil organizations. All Iraqis are threatened by the most dangerous terrorist organization in the world.”

Iraq is witnessing a crime against humanity performed by an international terrorist organization against all Iraqi components, including the Sunnis who historically do not follow the extremist Salafist doctrine. Regional and international political circles, in their attempts to carry out political agendas in Syria and Iraq, offered broad aid to IS, contributing to the inception and empowerment of this terrorist organization. IS has thus become a regional and international threat putting every country at risk. With the indecisive stance of the international community toward fighting IS, the likelihood of its remaining in the region for a long time is high. Therefore, crimes and massacres against religious minorities, as well as other components, will continue uninterrupted.