The religious authorities in Najaf and Karbala showed their support to displaced minorities, notably Christians from Mosul, and expressed their readiness to offer their help. 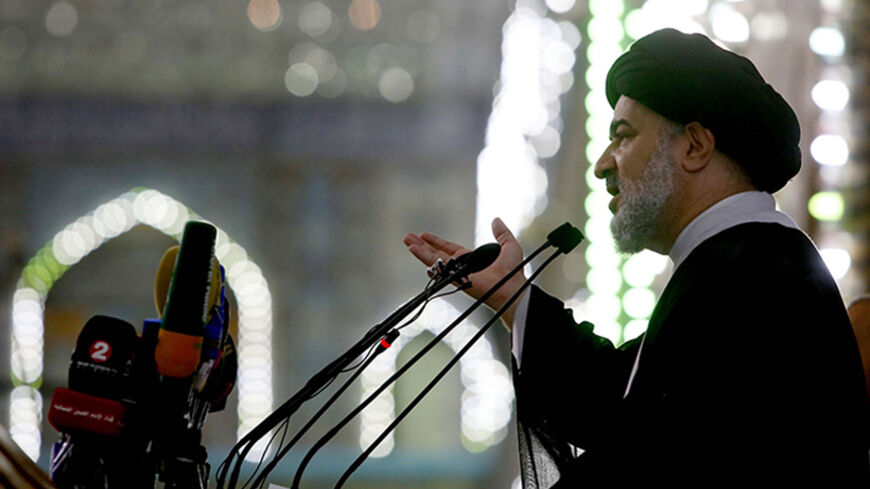 NAJAF, Iraq — After Christians were forced to leave Mosul and other areas that fell under the control of the Islamic State (IS), Kurdish and Shiite dominated cities opened their doors to receive them. Religious authorities adopted stances supporting Christians, as they called on residents to host and help their brothers in the country.

The Imam Al-Khoei Foundation, one of the prominent religious institutions in Najaf, issued on July 30 a statement in support of Christians and minorities in Iraq. An excerpt of the statement reads, “We announce our readiness to receive the displaced Iraqi families, be they Christians or Muslims. We call on all Iraqis to offer aid for the displaced families and protect them from the aggressors, in accordance with the principles of humanitarian and national fraternity.”

Under the slogan, “We cooperate, work, unite, think, plan, and achieve to succeed,” the foundation announced its complete readiness to cooperate with all international, humanitarian and societal organizations, saying, “They [Christians] will come to find our hearts open before our arms.”

Jawad al-Khoei, the foundation’s director in Najaf, told Al-Monitor over the phone, “Christians are our homeland brothers, and our duty is to do all we can to protect them from extremists and terrorists. All of our cities and homes are open to receive them. There would be no religious limits or clampdown, had they wished to settle down in Najaf temporarily or permanently.”

Prominent religious guide Sayyed Hussein al-Sadr issued a statement dedicated to the displacement of Christians from Mosul, affirming their “national belonging to Iraq.”

“They are our brothers in the country and in humanity, and have equal rights with all Iraqis,” Sadr noted in the statement.

Karbala preacher and Sayyed Ali Sistani’s spokesman, Ahmed al-Safi, denounced in his last sermon the “recent attacks on Iraqi minorities,” saying, “Tens of thousands of Turkmens, Shabak, Christians and other minorities are now living under harsh circumstances due to displacement from their areas, after terrorists took over their cities in Ninevah and other regions. The efforts exerted to look after them and alleviate their suffering are still subpar.”

On Aug. 3, the Najaf provincial council announced “its complete readiness to receive displaced Christian families who have left their villages and homes in Mosul.” The council affirmed that “appropriate housing will be provided. Also, the Imam Ali Holy Shrine in Najaf and Imam Hussein Holy Shrine in Karbala are ready to host Christian families, and indeed competent committees are being formed in the two holy cities.”

Al-Monitor learned from an official of the Red Crescent that the province “has until now received more than 17,000 displaced, the majority of whom are sheltered in Hussainiyat [congregation halls for Shiite commemoration ceremonies], mosques, and other religious buildings. They are receiving support from humanitarian institutions affiliated [with] the Shiite authority, the Imam Ali Shrine and the people of Najaf.” Al-Monitor met with two displaced Christian families who affirmed that they were receiving services and aid, as other displaced are.

It is important to note that the two holy cities of Najaf and Karbala were dominant Christian centers for centuries, where the ruins of old churches are located, some of which date back to the second century. In fact, until mid-20th century, some Christian and Jewish families were still living in the two cities, without being subjected to any kind of persecution or discrimination.

The flow of Christians into the two cities, if it continues, and their potential settling there, will revive Iraqi plurality, which has been decaying in the last years.