Iran’s national volleyball team gets a warm reception in “Tehrangeles” in another first for US-Iran relations. 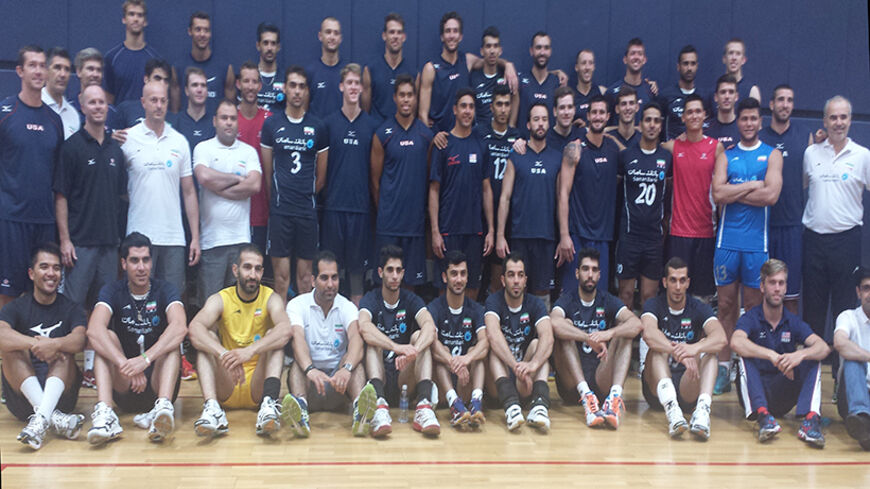 Iran’s national volleyball team is attracting record crowds on its first visit to the United States, part of a new wave of people-to-people exchanges promoted by both governments in recent months.

Playing the US national team in the first of four exhibition matches on Aug. 9, the Iranians could be forgiven for thinking they were back in Tehran, not “Tehrangeles,” as Los Angeles is known for its huge Iranian diaspora community.

The largely Iranian-American crowd sang a patriotic song that predates the founding of the Islamic Republic but remains popular among Iranians worldwide. Many in the crowd at the Galen Center at the University of Southern California in Los Angeles also waved the current Iranian flag — an unusual outpouring of support for the visitors in a city where many Iranian emigres have been harshly critical of the policies of the Islamic Republic.

“For me, the purpose is to create a dialogue that is without political agenda, that shows we are of the same kind,” Sheila Irani, one of the facilitators of the visit, told Al-Monitor. Irani, who was born in the United States to parents who came from Iran in the 1950s, arranged for the Iranian team to be presented with a proclamation from the Los Angeles City Council welcoming them, noting their accomplishments in the sport and wishing both teams good luck. The city of Anaheim gave the Iranians a similar document.

Bahman Baktiari, executive director of the International Foundation for Civil Society, a Salt Lake City nonprofit that assisted the US and Iranian volleyball federations in arranging the exchange, said the ceremony Aug. 12 at Los Angeles City Hall “says a lot about the changing atmosphere” toward Iran. In February, the City Council voted unanimously to impose sanctions on investors in Iran’s energy sector. Yet this week, council members — including a Jewish member — enthusiastically greeted the Iranian team, Baktiari said.

The US government is also energetically promoting the visit as part of an expanding public diplomacy campaign intended to build the ground for better relations and complement the negotiations on a long-term nuclear agreement.

State Department representatives met the team on their arrival at Los Angeles airport and the games are being live-streamed on both the Voice of America Persian service and the USA Volleyball website. There is also a Twitter hashtag: #usavcup.

At the daily press briefing on Aug. 10, deputy State Department spokeswoman Marie Harf made a point of welcoming the Iranians. “We’ve talked a lot in this room about sports diplomacy and how important we think it is,” Harf said.

“We see it [this visit] as an incredible opportunity to promote good will and understanding between the Iranian and American people,” Greg Sullivan, a senior adviser to the State Department on Iran, told Al-Monitor. It is “part of an ongoing effort to promote exchanges in sports, arts, education and culture between the civil societies of both countries.”

So far, the United States has won two of the exhibition matches with two more to go — Aug. 15 at San Diego State University, and Aug. 16 at the University of California, Irvine.

In addition to playing and training, the Iranians have had a chance to go shopping at an outlet mall near Anaheim and visited Universal Studios, a bit of Hollywood and the Santa Monica pier, Sullivan said. He said the Iranian delegation of 29 players, coaches and federation officials had been “exemplary ambassadors on the part of the Iranian people and we are really happy we got to know them.”

Mohammad Reza Davarzani, president of the Iranian Volleyball Federation, told Al-Monitor in an email that the trip “provided us with an opportunity to enhance the capabilities of our volleyball team by having four matches with a top-rank American team.” He added, “It is part of our strategy to have friendship games with teams from top countries … [to] acclimate our players and improve their skills in preparation for the World League games.”

“Since we have to play against the United States in the coming year, this first friendship competition has been very helpful to our team, coaches and technical staff,” Davarzani said. “Winning is not important, learning and improving our skills is what counts in these friendship games.”

Asked about his reception in the United States, Davarzani told Al-Monitor, “I was impressed by how our Iranian community here in Los Angeles came to our games and supported Iran. It has always been a goal of mine to bring the joy of watching Iran's volleyball team compete overseas for our Iranian community abroad.”

For USA Volleyball, this type of sports diplomacy is not new, even if the Iranian visit is a first. Kerry Klostermann, secretary general of the organization, told Al-Monitor that the US team has hosted Cubans and also visited Cuba.

Logistics were a big challenge, given the complexities of obtaining US visas for the Iranians. Doug Beal, the chief executive officer of USA Volleyball, told Al-Monitor, “I’ve been talking to the president of their federation for a year or so” to make the necessary arrangements.

According to the State Department, the US and Iranian teams first encountered each other in 2006 at a world championship in Japan. They also competed at the International Volleyball Federation (FIVB) World League Finals in Florence, Italy last month, when the Americans again won. However, the Iranians beat the United States in five sets last year at the FIVB World Grand Champions Cup in Tokyo. The teams are in the same pool for the World Championships that start Aug. 30 in Poland, Beal said.

While volleyball is a relatively new sport for the Iranians compared to soccer and wrestling, they have improved dramatically in recent years and are now ranked first in Asia and 11th worldwide. The United States is currently ranked 4th.

The sport has become extremely popular in Iran and has led to some controversy because female fans are not allowed to watch the games in person. In June, Iranians protested outside Azadi stadium where Brazil, the current number one team, was playing Iran.

Many in the audiences in southern California have been women — a fact not lost on Iranian fans.

US volleyball officials say they are looking forward to more interaction with the Iranians. Beal told Al-Monitor that while in the United States, the Iranian federation signed an agreement to promote future exchanges, explore ways to share technical information and training ideas and promote youth and junior age teams. He said the US team is planning to visit Iran next year and expects to host the Iranians again next year as well.

“From our perspective, it’s a terrific exchange,” Beal said.

Asked about the potential political implications of the visit given the lack of diplomatic relations and a 35-year history of estrangement, Klostermann said, “Idealistically, I would hope that this is an example that people are people and frankly, want to get along. … If that contributes to resolution of these [political] issues, that would be fabulous.”