Sports diplomacy is on the rise again between the United States and Iran, spearheaded by American wrestlers. 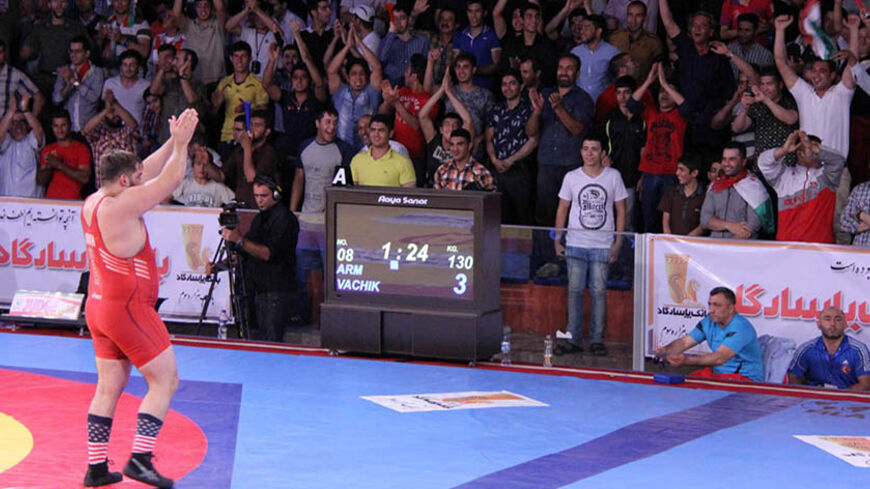 The Iranian crowd cheers for the American wrestler Robby Smith in his match against Armenia's Vachik Yeghiazaryan at the World Cup for Greco-Roman wrestling in Tehran, May 16, 2014. - Iranian Wrestling Federation

“People look at me like I have two heads,” said James Ravannack, describing the reaction he gets when he explains to people what a fabulous time he had in Iran. Ravannack, president of USA Wrestling, told Al-Monitor that he “can’t wait to go back” and wants to take his family along to stay for a month.

Competing in May in a packed Tehran stadium in the World Cup for Greco-Roman wrestling, the American team is part of a revived spate of athletic and other US cultural exchanges with Iran. Both countries are opening the door for people-to-people diplomacy as their nuclear negotiators engage in a different kind of interaction and competition in Vienna.

In addition to the American wrestlers, US polo players have competed in Iran, and Iranian volleyball players are scheduled to take part in four matches in Southern California Aug. 9-16 against the US men’s national team. Iranian wrestlers have been invited to Chicago in November to a Greco-Roman competition called the Curby Cup. Soccer exchanges are also being considered by several groups, playing off the growing popularity of the sport in the United States as a result of this year’s World Cup.

Sports diplomacy goes back to ancient times and in the modern era to 1896, when Greece hosted a revived Olympic Games. Sports have played a role more recently in overcoming hostility between the United States and its geopolitical adversaries. The organizers of the latest Iranian-US exchanges hope their efforts will advance US-Iranian understanding in the same way that ping-pong helped break the ice between the United States and China in 1971.

“Sports exchanges with Iran provide a unique opportunity to connect with the Iranian people and build lasting bridges with the young generation in Iran,” said Bahman Baktiari, executive director of the International Foundation for Civil Society, the Salt Lake City nonprofit that facilitated the wrestlers’ recent trip to Iran. “Iranians inside Iran connect with visiting American teams, and this is the only connection they can feel with the United States on their home soil.”

For Americans, who tend to view Iran through the lens of the 1979 hostage crisis or President George W. Bush’s “axis of evil” speech, going to Iran and actually meeting its people can be mind-blowing.

Robby Smith, 27, the number one US heavyweight Greco-Roman wrestler, told Al-Monitor that the reception he got from Iranian fans was “the most incredible I’ve ever experienced.”

At one point during the competition, the United States was wrestling Russia and “getting throttled,” he said. “I was losing 3-0.” During a break in the action, an Iranian began beating a big bass drum, and Smith started beating his chest in time to the rhythm.

“The people saw me doing that and just went crazy,” Smith said. “I started scoring. I took him [the Russian] down, and it was 3-2. I pushed him out, and it was 3-3. I took him out at the end, and the whole stadium erupted. It was insane.”

The Iranians kept chanting, “ ‘R. Smith’ and ‘USA, USA!’ ” Smith said. The same thing happened after he came from behind against an Armenian wrestler and when he returned, in plain clothes, toward the end of the event. “Thousands of Iranians chanting 'USA!'”

Outside the stadium, the reception was equally if not more effusive. Smith said he and a teammate were walking down the street to get some chips when Iranians pulled over in their car “just to take a picture of me. … I felt like a Beatle.”

Head coach Steve Fraser told Al-Monitor that shopkeepers pressed free table linens on members of the team while a rug dealer — who had a picture of the legendary American boxer Muhammad Ali on his wall — “would not let us leave without giving us a carpet that must have been worth $2,000.”

Fraser, who estimates that he has visited 50 countries in 19 years with USA Wrestling, said, “Iran was, if not the top, then at the top” of all of them. He added, “[Iranians] are some of the nicest people I’ve ever met. They treated us like royalty.”

Wrestlers have a particular advantage in Iran, where the sport is, if not the most popular, a close second to soccer. American wrestlers played a key role in an earlier wave of sports diplomacy under the presidencies of Bill Clinton and Mohammad Khatami. This reporter was present in 1998 when US wrestlers returned to Iran for the first time since the 1979 revolution. The US flag was displayed in Tehran’s Azadi stadium — not burned as usual in an anti-American demonstration — and Iranian fans cheered as much or more for the Americans as they did for their own team.

US-Iran exchanges dwindled under Khatami’s undiplomatic successor, Mahmoud Ahmadinejad, and especially following the disputed 2009 presidential elections in Iran, which resulted in mass protests and a brutal government crackdown. Iranian and American wrestlers, however, found common cause in 2012, lobbying internationally to keep their sport in the Olympic Games. Joined by the Russians, they succeeded in retaining Olympic status through the 2024 Games, Fraser said.

A unique feature of the recent trip to Iran by the US wrestlers is that their current team leader — a Minneapolis wrestling enthusiast named Christina “Kiki” Kelley — is a woman. In the Islamic Republic, women are generally banned from sports stadiums because of a concern for women’s modesty, something Iranian women sports fans have been objecting to for years.

Kelley, who like the other members of the US delegation, had expected a grim, strict Islamic state, came prepared with ultra-conservative black clothes — which elicited giggles, she said, from many Iranians. Asked to participate in the opening ceremonies for the competition, she changed into red, white and blue.

“I kept my head bowed until we were two-thirds of the way around, when I realized that men were standing and that they were not booing, they were cheering,” she told Al-Monitor. The following day, an Iranian woman working for the company that organized the competition was allowed into the arena, and a female Iranian reporter was permitted to enter the House of Wrestling when Kelley visited Esfahan, she said. 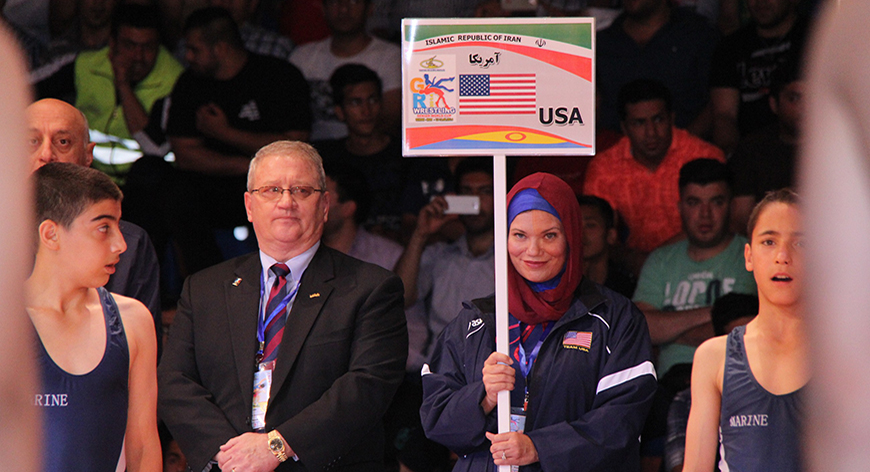 “I think my presence had an impact on the old guard era guys in a positive way,” Kelley said. She was also pleased that the Iranian men she encountered saw a different sort of American woman from the stereotype perpetuated by American movies and TV.

Kelley was invited by her Iranian hosts to stay an extra six days, which gave her a chance to travel to Esfahan and to go to schools, an orphanage and numerous cultural sites, including a private art collection at the parliament in Tehran. She, like Ravannack, said she wants to go back with her family and is also considering becoming a sports and cultural ambassador to Iran if the US government decides to appoint one.

Ravannack, who is from New Orleans and devotes considerable time to promoting wrestling in its inner city, said he asked to visit a poor neighborhood in south Tehran to see its wrestling program. The Iranian and American federations have agreed to exchange young wrestlers, aged 15-21, and to start a cadet world cup for high school students, he said. Ravannack also promotes wrestling for youngsters with disabilities, including autism, and said he would like to work with Iran on a similar project.

The Americans have a lot to learn from the Iranians when it comes to wrestling, Ravannack said, and both sides can benefit from their mutual love of sports to overcome past grievances and suspicion.

“Sports can heal a lot of politics if politicians would let us,” he said.