An event founded in the memory of a young American wrestler provides a new pathway for advancing people-to-people ties between the United States and Iran. 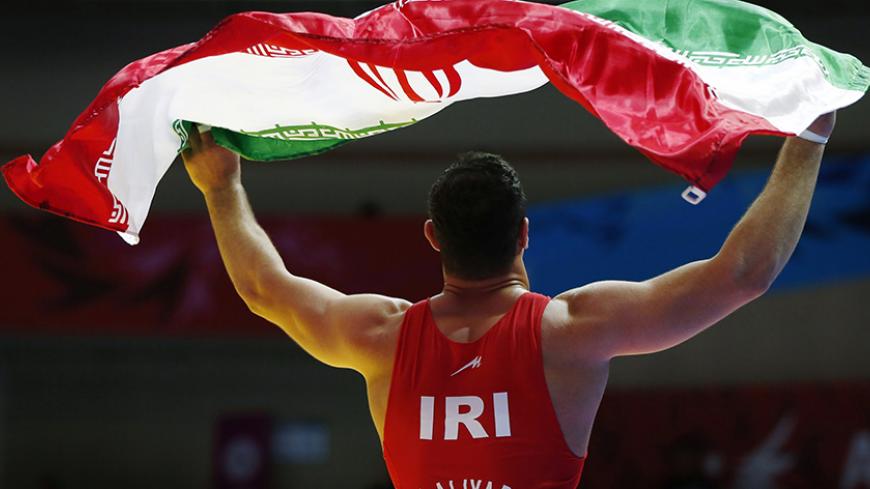 American wrestler Jacob Curby died before he could fulfill his dream of competing in the Olympics. But a competition established in his name will mark another milestone in the accelerating sports diplomacy between Iran and the United States.

For the first time since the event was established shortly after Curby’s death in 2010, an Iranian team will be participating in the Jacob Curby Cup at Chicago State University on June 27.

In the past, the competition has attracted teams from less accomplished wrestling nations, Christina “Kiki” Kelley, team leader for USA Wrestling and a major supporter of the Curby Cup, told Al-Monitor. “Iran is No. 1 in the world for Greco-Roman so it’s a huge deal to get them.”

Unlike free-style wrestling, Greco-Roman involves only upper body holds and is considered more difficult and authentic in terms of the history of the sport, which goes back to ancient times. Wrestling is also hugely popular in Iran and has been a pathway in the past to reviving US-Iran people-to-people ties. In 1998, US wrestlers became the first US athletes to compete in Iran since the 1979 Islamic Revolution.

Such engagement waned during the presidency of Mahmoud Ahmadinejad who took a more confrontational approach toward the United States. Iran’s attendance at the Curby Cup reflects renewed momentum in US-Iran sports diplomacy since the 2013 election of President Hassan Rouhani, which also led to dramatic progress in negotiations on restricting Iran’s nuclear program.

US wrestlers have competed in Iran most recently at the Takhti Cup in the provincial capital of Kermanshah in western Iran. Iranian wrestlers came to the free-style World Cup in Los Angeles in April and are due to take part in September at the world wrestling championships in Las Vegas. Iranian volleyball players have also visited the United States for exhibition matches in Los Angeles last summer and world league championships last month. Iran, which found itself in the same draw as the United States, lost but will get a chance to recoup against the US national volleyball team in Iran this week. 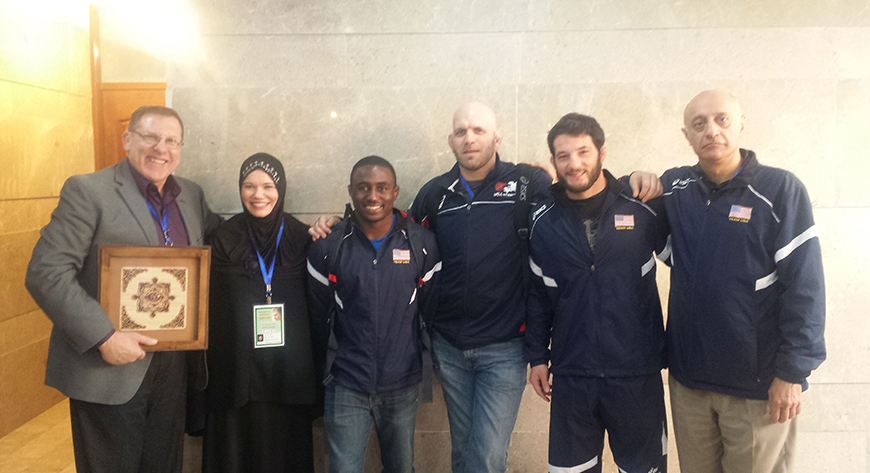 From left to right, David Curby, Christina Kelley and the American team at the 2015 Takhti Cup in Kermanshah, Iran, Feb. 12, 2015. (photo by Hamid Khorram)

David Curby, Jacob’s father, told Al-Monitor that he invited the Iranian team to the Curby Cup last year but they could not get visas in time. This year, “It’s going through,” he said.

Obtaining visas is cumbersome and expensive for the Iranians because the United States has no diplomats based in Iran who can process their requests. Curby said the entire team had to travel to Dubai twice — once for individual interviews; a second time to pick up their visas.

The Iranians pay for their air fare to the United States and once here, the Jacob Curby Foundation will take care of expenses for food, lodging and domestic travel. “I always end up going in the red personally but I tell my wife, if we don’t believe in this cause, how can we expect others [to]?” Curby said.

Curby, who is an expert in the science of wrestling and also directs programs that engage underprivileged youth in the sport, has visited Iran three times with the American team. The first time was in 1998 when Mohammad Khatami was president and there were hopes — later disappointed — for a breakthrough in bilateral relations. Curby returned last year for the World Cup in Greco-Roman and again this February for the Takhti Cup in Kermanshah.

“I’m more well known in Iran than in the US,” Curby said. “I go over there and I’m treated like a king.” He and other Americans who have taken part in these exchanges say they have been warmly welcomed by ordinary Iranians and that shopkeepers have pressed expensive gifts on them and invited team members to their homes for dinner.

Curby said he hoped to show the Iranians equivalent hospitality and plans a banquet for the team at Reza’s, a well-known chain of Persian restaurants in Chicago, as well as dinner at Ditka’s, a restaurant chain founded by Mike Ditka, the Hall of Fame football player, coach and TV commentator.

“We’re tickled to have a very good team [from Iran] led by Hamid Soryan, an Olympic and six-time world champion,” Curby said.

After the event — which will feature eight matches in eight weight classes — the Iranians will travel with the Americans to Marquette, MI, for a joint training session at the US Olympic facility there. Then it’s back to Chicago where the Iranians will get to experience July 4 celebrations before heading home.

Many Iranians are familiar with life in the United States but “in the US, we’re not as aware of Iran as a culture, a well-educated population,” Curby said. “They’re not evil people who want to get us. They’re just like us and they want a good relationship.”

“Wrestling is the most cherished sport in Iran, we have over 2 million wrestlers in Iran who strive to become a member of Iran’s national team and compete in international events abroad,” Hassan Babak, national team leader for Iran’s Greco-Roman wrestling team and head of Iran’s delegation to the Curby Cup, told Al-Monitor in an email.

“Although Iran's free-style wrestling team has visited the United States on numerous occasions, coming to the Curby Cup is the first trip of Iran's Greco-Roman team to the United States, and it is also a first in holding joint training sessions with the American team,” Babak said. “Since Iran plans to attend the World Championships in Las Vegas Sept. 7-12, the Curby Cup will provide a good experience for our Iranian team.”

Robby Smith, a heavyweight Greco-Roman US wrestler who competed in Iran last year and was bowled over by the effusive reception, told Al-Monitor that he is looking forward to the Curby Cup, which he called “a friendly match.”

“It’s awesome to get some great competition before the world championships,” he said, “Iran, Russia and Turkey are the powerhouses.” Smith added, “I’m not into politics.” But said he supports “anything to help the US close the gap between the US and Iran. It’s a huge step for our sport and for relations … and it’s a privilege to be part of it.”

Kelley told Al-Monitor that “sports diplomacy is greasing the skids” for an overall improvement in US-Iran ties after 35 years of estrangement and missed opportunities.

She noted that the US wrestling team was in Iran this year at the same time that Israeli Prime Minister Benjamin Netanyahu was in the United States, addressing a joint session of the US Congress — a speech devoted primarily to criticizing an impending nuclear agreement with the Islamic Republic.

Kelley said she told Iranians that comments in support of Netanyahu did not “represent all American opinion.”

For Curby, the upcoming event has political, professional and intensively personal meaning. The competition is named for his son, who died at age 25 of an apparent seizure connected to epilepsy.

A wrestler since childhood, the younger Curby had survived stage four Burkitt lymphoma 10 years earlier when he was a sophomore in high school, his father said.

“He was on the USA national team and he’d been a national champion,” Curby said. “He was competing around the world with his eyes set on making the Olympic team. … Jake was so tough all the time. He was our hero.”

Curby told Al-Monitor that wrestling has benefits beyond bringing together former adversaries.

“I know how wrestling inspires so many young people to excellence and fitness and develops confidence,” he said. “It’s such a good activity and I want other kids to be inspired.”

Just days before the competition, organizers said that the Curby Cup would not take place because the US Consulate in Dubai was unable to provide visas in time for the Iranians to make their flight to the United States.

A State Department official, who spoke on condition of anonymity, told Al-Monitor that the reason had nothing to do with Iran but was the result of a system-wide problem that has suspended the issuance of US visas worldwide.

Bahman Baktiari, executive director of the International Foundation for Civil Society, a Salt Lake City nonprofit that has facilitated athletic exchanges between the US and Iran, told Al-Monitor, “According to the US Consulate in Dubai, their system has been down and they cannot provide the visas in time for the Iranian team. They could not provide assurances that this problem will be resolved by the travel time of the Iranian team. The Curby family and the sponsors are extremely disappointed, and as you know, Dr. Curby devoted an enormous amount of energy, resources, and time for this cup named after his son.”