Turkey is suffering serious blows to its security and economy because of its own regional policy mistakes, and can expect more of the same from Prime Minister Recep Tayyip Erdogan as president. 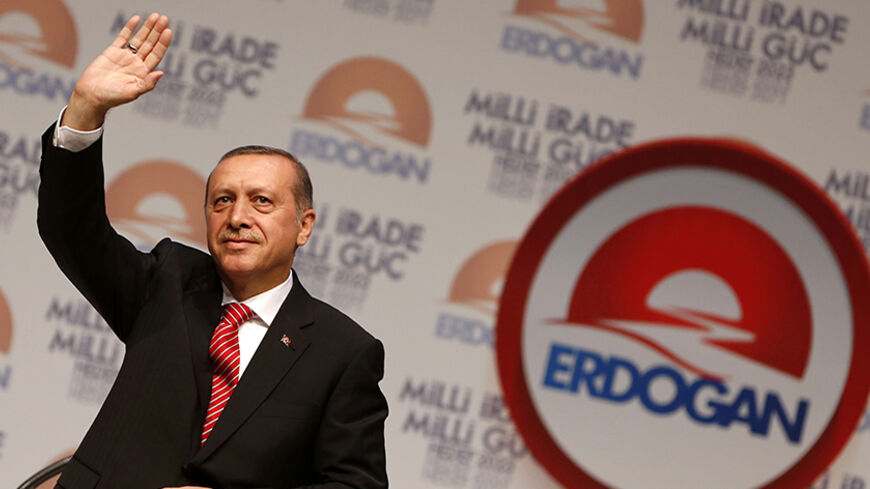 Turkey's presidential candidate and Prime Minister Recep Tayyip Erdogan greets his supporters at the end of a meeting to launch his election campaign in Istanbul, July 11, 2014. - REUTERS/Murad Sezer

The Turkey of Prime Minister Recep Tayyip Erdogan — who is expected to be elected president in just over a week — is an increasingly isolated country, and not just in the West, where antipathy for Erdogan has been rising steadily over the past few years because of his abrasive manners.

This is also the case in the Middle East, where Ankara has few communication channels left with regional capitals and where polls show Erdogan’s popularity is waning. His past claims about Turkey’s rapidly rising regional clout and global influence are now a distant echo.

Having lost its neutrality in regional disputes by openly taking sides in Iraq, Syria, Egypt and Palestine, Turkey has clipped its own wings. Most recently, Ankara’s attempt to get involved in cease-fire efforts in Gaza elicited anger not just from Israel, but also the Palestinian Authority and Egypt.

David D. Kirkpatrick pointed out in the New York Times July 30 that Egypt has a new coalition of Arab states — including Jordan, Saudi Arabia and the United Arab Emirates — that have effectively allied with Israel in its fight against Hamas. Under Erdogan, however, Turkey remains a strong Hamas supporter.

Erdogan under these conditions remains an unwelcome interloper to Egypt and its Arab allies, in sharp contrast with January 2009, when his popularity in the Arab world skyrocketed after he publicly blasted at Israeli President Shimon Peres to his face in Davos, accusing the Israeli military of killing innocent Palestinians.

Erdogan went on to base his approach to regional crises on ethical arguments, especially after the Arab Spring, which he believed would bring elected Muslim Brotherhood governments to power across the Middle East and North Africa.

Things appeared to be going his way until former President Hosni Mubarak was toppled in Egypt. The coup in Egypt, which was supported by Saudi Arabia and other Arab regimes, showed that the Brotherhood may win at the ballot box but faces powerful forces determined to crush it. In Syria, where Ankara openly backed the Sunni majority in hope of an Egyptian-type outcome, Erdogan was also disappointed.

Erdogan continues to enjoy support from the masses huddled around the Muslim Brotherhood and its offshoots, like Hamas. Nevertheless, the Pew Research Center’s Global Attitudes Survey for spring 2014 shows a sharp decline in regional support for him.

“Support for Erdogan has dropped significantly in four of the seven Middle Eastern nations surveyed since last year,” Pew reported. It pointed to Jordan, where last year, 75% of those surveyed held a favorable view of Erdogan. That number fell to 60% this year. Meanwhile, support in the Palestinian territories for Erdogan during the same period dropped from nearly 75% to 55%, and in Egypt from 68% to 42%.

People across the Arab world once applauded Erdogan, not only for standing up to Israel, but also for providing hope for democracy in the Middle East. The fact that Erdogan was elected and appeared to be advancing democracy, despite his Islamist outlook, instilled hope in many young Arabs that the same could happen in their countries. Meanwhile, the Turkish economy was also booming, and it was telling that Turkish TV soap operas depicting modern lifestyles were lapped up across the Arab world.

Instead of Arab countries going the Turkish way, however, Erdogan started going the way of Morsi in Egypt by promoting an overtly pro-Sunni Islamist agenda at the expense of those who did not vote for him. He went on to restrict freedoms and Internet access after last summer’s Gezi Park protests.

This was not lost on Arab youth populations, which have been clamoring for more freedom and using the Internet extensively to get their messages out. Suddenly, Turkey did not look likely to prove that Islam and advanced democracy could coexist. This reality was brought home to liberal Arabs when one of those seriously hurt during the Gezi Park protests in Istanbul was Lavna Allani, a visiting Egyptian woman, who barely survived a gas canister to the head fired by the police.

Erdogan, like Morsi, proved in the end not to be a pluralist democrat but a “ballot-box majoritarian” and not just Arab regimes but the Arab public in general started turning against him. Erdogan still enjoys over 50% support in most places, but the downward trend is likely to continue, given Ankara’s current policies.

We are on the cusp now of Erdogan’s presidency and he has openly declared his intention to rule as the “elected leader of the nation,” rather than a democratically elected president whose powers are controlled by the constitution. Given Erdogan’s current railings against Israel, which he says is perpetrating genocide in Gaza, Turkey normalizing its political ties with this country — even though its economic ties remain on track — is off the agenda for the foreseeable future.

Erdogan’s unwavering support for Hamas and the Muslim Brotherhood and anger at Arab regimes for remaining inactive as Israel pummels Gaza, will, however, ensure that Ankara’s ties with key Arab states will also remain less than optimal for the foreseeable future. Unless, that is, things change radically in the region in ways that favor Erdogan. That situation appears unlikely, as the perceptive journalist and historian Robert Kaplan points out in his 2012 best seller, “The Revenge of Geography.”

“Bristling with advanced armaments, to say nothing of weapons of mass destruction, the Middle East of the next few decades will make the recent era of Arab-Israeli state conflict seem almost like a romantic sepia-toned chapter of the Cold War and post-Cold War, in which calculations of morality and strategic advantages were relatively clear cut.”

Looked at objectively, it is apparent that developments in the Middle East are not moving in a direction Erdogan would like. Turkey has started to suffer serious consequences for its security and economy from the dire developments along the Sunni-Shiite fault line.

Erdogan’s Turkey is far from the proactive regional player it once hoped to be, and is instead having to react to the negative spillover effects of events it has no power to control or prevent. Many see this as the logical outcome of the succession of policy mistakes Ankara has been making based on its misplaced assumptions about the region.

How Erdogan hopes, as a president exercising executive powers, to sustain his morality-based approach to the region despite the region’s hard realities while trying not only to ward off threats to Turkey, but also to make Ankara a key regional player remains a mystery that even he has no answer to.