The cult of Erdogan

Turkey’s ruling party and its supporters have come to attribute quasi-divine qualities to Prime Minister Recep Tayyip Erdogan, creating a personality cult that reinforces concerns over social peace in Turkey. 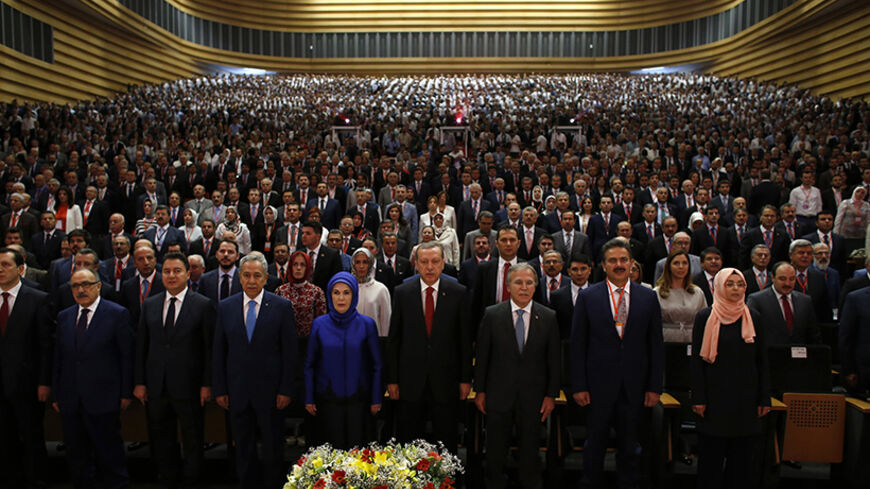 Turkey's Prime Minister Recep Tayyip Erdogan (C), his family and Justice and Development Party members attend a meeting in Ankara where he is named his party's candidate for president, July 1, 2014. - REUTERS/Umit Bektas

Anyone who happens to travel to Istanbul these days will come across the same image anywhere they go, anywhere they look: a determined and solemn Recep Tayyip Erdogan, gazing at the horizon in a confident posture with a vague but haughty smile on his face.

Fifty-five million Turkish voters are being bombarded with Erdogan’s image in an aggressive electoral campaign ahead of the Aug. 10 presidential polls, in which the prime minister is the strongest and most advantageous candidate.

The omnipresence of Erdogan’s image cannot be passed over with the explanation that the ruling Justice and Development Party (AKP) has mobilized all its financial and organizational might for the elections, along with all the public facilities and resources it has at its disposal. It is also the story of how a cult has been created around Erdogan as he presses ahead in his journey to higher echelons of power.

The building of the “Erdogan cult,” under way for a long time, has now reached an advanced stage for the presidential campaign.

Erdogan’s opponents charge that he is seeking to take over all political power in Turkey and install a “one-man” regime free from any checks and boundaries.

Erdogan has long made it clear he will not settle for the impartial constitutional status the president has under Turkey’s current parliamentarian system. He has openly indicated that, if elected, he will be ruling Turkey from the presidential palace through his uncontested leadership of both the AKP and the government.

Many of the critical stages on the way to the regime Erdogan dreams of and calls the “new Turkey” are already behind him. None of the stumbling blocks have been able to stop him from moving forward. As he overcame one obstacle after another, drawing on his power, political instinct and the sound bonds he forged with his voters, the personality cult around him grew in the process.

First, in the period of 2007-12, Erdogan dismantled the Turkish army’s political tutelage, backed by his former ally, the Gulen religious community, which wielded significant influence in the judiciary and the police. The once powerful army, which used to bully politicians with its history of coups, watched helplessly as one tenth of its generals and admirals landed behind bars.

In the meantime, constitutional amendments approved at a referendum in September 2010 and Erdogan’s ensuing interventions made sure he placed the judiciary largely under his own control. Erdogan is now a prime minister who has no scruples about speaking publicly of how he issues orders to the judiciary when needed.

In a similar fashion, Erdogan created his own media, while bullying and subduing those of the mainstream. In a show of strength, the seven or eight newspapers he now controls would often appear with identical front pages and headlines.

The only state institution that remain outside his grip is the Constitutional Court and to some extent, the Central Bank.

Erdogan’s archenemy now is the Gulen community, which he has branded a “parallel structure” within the state following the corruption and bribery probes of Dec. 17 and Dec. 25 that targeted himself and both his government and family. Dozens of police officers, who allegedly belong to the “parallel structure,” have been detained since July 22 on charges of espionage and illegal wiretapping. The operations appear bound to expand and extend to the judiciary.

Erdogan is obviously a politician who is fond of power and knows how to use it, but hates to share it. Some say he is also charismatic. His reputation owes much to his belligerence: He never shies away from fighting and delivers far more blows than he takes. Erdogan has never lost an election so far. Though he occasionally saw his vote decline, he managed to increase it in most cases, always leaving his opponents trailing far behind.

In Turkey, he is also widely acknowledged as a skillful orator with strong influence over the masses. Yet, that is not the only reason why his electorate is so loyal to him. The voters see him as one of their own in terms of attitude, language, dress and culture. In the eyes of Turkey’s rural, poorly educated, traditionally nationalist and conservative Sunni majority, Erdogan is their embodiment at the helm of power.

Those masses virtually identify with Erdogan. The overwhelming part of the Sunni majority is watching how Erdogan makes their provincial conservatism the new cultural norm of Turkey and their admiration keeps growing. Thanks to Erdogan, those masses, who believe the secular republic ostracized and belittled them, are for the first time savoring the joys of power. It is a unique sentiment.

And last but not least, the lion’s share from the prosperity and economic growth Turkey achieved under Erdogan has flown to the AKP’s conservative Sunni electorate through the government’s social welfare policies and political nepotism.

So, those are the main reasons — though not all — that make the Erdogan cult thrive. As a result, we are now faced with a social phenomenon where Erdogan’s supporters almost sanctify him and attribute him with metaphysical powers that ordinary people lack.

In Turkey we have a proverb, “The sheikh doesn’t fly, his disciples make him fly.” It means that people who develop loyalty and trust for a certain individual see him larger than life, believe he possesses extraordinary qualities and want others to also believe so.

The proverb has been validated on many occasions in recent times. Take for instance the bizarre incident at Erdogan’s flamboyant rally in Istanbul on Aug. 3.

As Erdogan addressed the crowd from the platform, a woman was seen fainting. Erdogan gesticulated as if saying “bring her over.” Instead of being taken away by ambulance, the allegedly sick woman was taken to Erdogan. The stretcher was elevated to the platform and Erdogan reached out to the woman. She grabbed his right hand with both hands, screaming “Allah, Allah, Allahu Akbar” (God is great). The screams were heard clearly both at the venue and in the live TV broadcast because Erdogan still had the microphone in his left hand. The footage of the incident hit the Internet media with the tag, “The woman who recovered after holding Erdogan’s hand.”

The extraordinary qualities his followers attribute to Erdogan stem from his Islamism. That is, Islam is the source of the exceptional. Back in February 2010, the AKP’s provincial chairman in the western province of Aydin, Ismail Sezer, found himself expelled from the party after he said, “Erdogan is like a second prophet to us.” Yet, others who have validated our proverb with respect to Erdogan have not faced any sanctions. Here are some of many examples:

However, the cult of Erdogan has another aspect: The more his supporters love and glorify him, the more an equally large part of the population dislikes and even detests him. According to a Pew survey published on July 30, 48% of Turks believe Erdogan has a positive influence on the country, while an equal 48% see his influence as negative, illustrating how Turkey is torn right in two on the issue of Erdogan.

One should keep in mind that Erdogan implicitly threatened Turkey with civil strife during the Gezi Park protests last year. In a bid to bully the protesters, he said he was “hardly restraining 50% [of Turks] at home” — a reference to his supporters. In this highly polarized climate, the “Erdogan cult” represents a potential threat to democracy and social peace in Turkey.