Egypt to open Nasser museum in 2015

State-sponsored cultural emblems have become commonplace since the military took power in July 2013, but at the expense of free cultural expression. 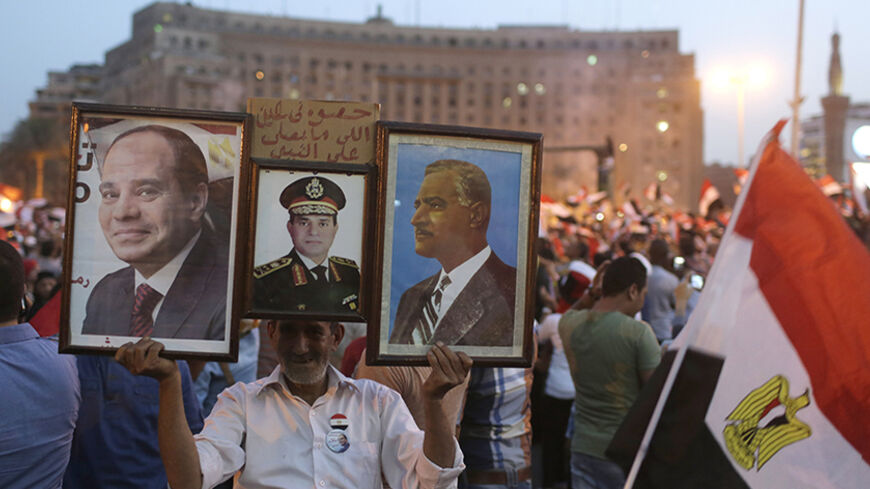 CAIRO, Egypt — In Manshiyet El-Bakry stands the house where Gamal Abdel Nasser lived and died. Millions of Egyptians thronged these European boulevards on Oct. 1, 1970, to mourn the passing of Nasser and his pan-Arabist project.

But until now, the Heliopolis home has never been open to the public.

Egypt's Culture Ministry has just announced a plan to open up Nasser's residence with a museum by 2015. Minister Gaber Asfour said it will present the "formation of our national history," something President Abdel Fattah al-Sisi recently invoked by claiming the "January 25, 2011, and June 30, 2013, revolutions are continuations of the revolution of July 23, 1952."

Although Hosni Mubarak floated a similar scheme, the timing of Asfour's announcement is striking when the state appears busy building a totemic ideal of Egyptian history and culture.

Since Mohammed Morsi's overthrow on July 3, 2013, state-sponsored cultural emblems have been increasingly commonplace. From pro-army songs like "Teslam al-Ayadi" (Blessed are the Hands) to a gauche monument honoring the security forces on the site of the Rabia al-Adawiya massacre, the state has attempted to enshrine its place in public culture in a way arguably not seen since Nasser's time.

In a June 11 op-ed for state-owned newspaper Al-Ahram, Asfour stressed the importance of "cultural organization of the state" at a time of "big national transformations."

Ahdaf Soueif, novelist, journalist and political activist, claimed that "cultural initiatives super-imposed by the state" are an anachronism that will not last without genuine reform.

"The era for that is gone," she said. "There was a cultural revival and a real cultural movement in the 1960s with Nasser; yes, but that's because people believed in the project. Good movies were being made, good plays were being put on; there were songs that people actually liked."

Under Nasser, the ministry introduced hundreds of "culture palaces" in towns and villages across Egypt to foster progressive cultural politics and development among peasant and worker communities — admittedly with an overarching message set out by the state.

"Now it's hard to see what there is to believe in," Soueif argued. "The discourse is encouraging people to think that we're back in the glory days, but I think people will become disillusioned with that pretty quickly."

Soueif is skeptical of the aims of the Nasser museum. Meanwhile, some of the more politicized cultural activities have been met with resistance.

Muslim Brotherhood supporters torched the Rabia monument on the nine-month anniversary since the massacre. Last November, then-Prime Minister Hazem el-Biblawi also inaugurated a monument to the martyrs of the revolution in Tahrir Square. Hours later, activists registered their disgust by tearing it apart. Soueif now calls it a "genuine cultural reaction," unplanned and off-script.

Ganzeer, a street artist who gained notoriety in the wake of the 2011 revolution, says Sisi's regime has shown an unwillingness to tolerate nonaligned culture, particularly if it criticizes the government.

One of Ganzeer's latest works can be seen on Mohamed Mahmoud Street today — a grim-faced army soldier smiling on top of a pile of skeletons.

"Sisi and his authoritarian military regime have made it clear that there will be no room whatsoever for any expression of opinion without government regulation," he explained, "for issues of, you know, national security and that kind of thing."

Sonali Pahwa, an academic specialist on performance in Egypt at the University of Minnesota, explains that the nature of state control has changed over the years.

"While there are resonances between contemporary state cultural production and those in Nasser's era, the difference is that today's pro-state figures — like Lamees el-Hadidi and Amr Adeeb — use the platform of television to amplify what is really only a small chorus of voices," Pahwa claimed. "The Egyptian state does not have monopoly over culture now, only over television."

In May, Ganzeer was denounced on-air by "Al Raees w'al-Naas" (The President and the People) host Osama Kamal, who presented the artist's real name and photograph, accusing him of being a Muslim Brotherhood operative. The artist, currently working on a project in Brooklyn, says these "fictitious" accusations "are no different to those of being an infidel worthy of murder, as has been the case in the past when the Brotherhood and Salafis were more vocal."

Soueif claims incidents like this provide insight into how the government views culture.

"Suddenly, someone whose job is to be a broadcaster … their job now seems to be to lecture the people and tell them what to think. And when the people don't behave as expected — as on the first day of the elections — they berate them and scold them and insult them," she says.

"I think that's probably quite indicative of the role the state sees for culture right now. It's to actually tell people what they should think and to create an alternative reality."

There are other signs of tension.

The ministry recently agreed to provide a monthly grant of 30,000 Egyptian pound ($4,195) to the "El-Fan Midan" (Art is a Square) festival — an independent, monthly fixture in downtown Cairo since the revolution. However, an alleged intervention by the Interior Ministry to cancel this month's event illustrates the lingering presence of security policy.

According to the Arabic Network for Human Rights Information (ANHRI), "There are some indications that the authorities demand[ed] the names of the participants and organizers of the festivals as well as the programs that would be provided."

The festival will reportedly go ahead on Aug. 9 after an intervention by Asfour.

And yet, the space for self-expression, as seen in the 18 days of the 2011 revolution that toppled Mubarak, has subsided. Pahwa maintains that state control is not as effective as before. Cairo's independent arts scene, for example, is flourishing, often with the help of nongovernmental organizations and international funding, even though public performance has been heavily restricted in the past year.

"It is only in literature that you see remnants of the old system." Theater has turned away from the state, Pahwa argued. The Cairo Opera House is often rented out for private events, while Alexandria is closed for Ramadan. "Perhaps there is a budget shortfall, or perhaps corruption is draining the finances of these institutions."

"In either case, it is deeply ironic that state cultural production has declined when the removal of Morsi's government was intended to revive it."