8 months in, clashes in Anbar continue

Houses and shops have been completely destroyed in Anbar as a result of the clashes between the Iraqi army and members of armed factions. 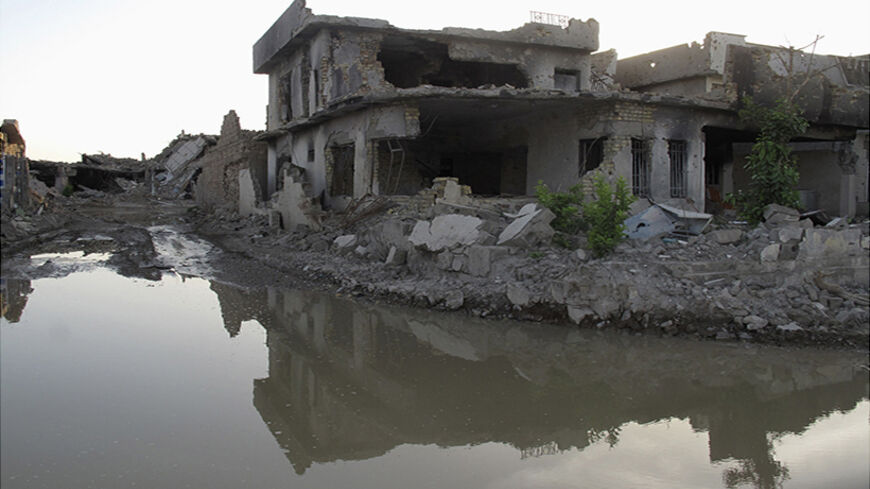 It is hard to assess the losses to the infrastructure in Anbar province as a result of the ongoing clashes that started in December 2013 between the Iraqi army on the one hand and the forces of the Islamic State (IS) and some armed tribal groups on the other.

Throughout the conflict, which has not subsided over the last eight months, both parties have been using mortar shells randomly and indiscriminately, which led to the destruction and demolition of houses.

Hamed al-Dulaimi, who fled from Fallujah to Baghdad, described the barrage of mortars falling like “rain” on the city of Fallujah.

Dulaimi's house in the region of Jubail had been shelled and destroyed, which forced him and his family to leave the city and flee to relatives in Baghdad.

Speaking to Al-Monitor, Dulaimi said, “Fallujah was razed to the ground and is no longer habitable.”

Government forces, with the help of the Awakening groups — which include under their banner the Anbar tribes — have repeatedly intensified their efforts to break into Fallujah, but to no avail, since the city has turned into a protectorate of the armed factions. This is not to mention the homes that have been booby-trapped by armed groups.

The old market and the Shorja market in Ramadi, the hub of Anbar province, were heavily bombed by army aircraft, resulting in the destruction of many shops.

Ahmed al-Anbari used to own a grocery shop in the Shorja market, but he shut it down and fled to Iraqi Kurdistan. He witnessed the heavy shelling on the market that took place on June 8.

In a telephone call with Al-Monitor, Anbari said, “The fighter jets bombed the market, wreaking havoc on dozens of shops.”

“The bombing took place at a late hour and the shops were closed, so many customers and shop owners survived,” he said. Civil society organizations in Anbar have been compiling statistics on the destruction to the infrastructure, taking photos of the damage, to be presented to the international community as “evidence of the army’s brutal actions,” according to Sheikh Mohammed al-Bajari, a member of the interim local council of Fallujah.

In an interview with Al-Monitor, Bajari said, “The dignitaries of Anbar have talked to the military leaders to try to stop random and indiscriminate shelling, but to no avail. The army continued with its operations.”

According to Al-Khair Foundation for widows and orphans, a civil organization operating in Anbar, “Thirteen government departments have been destroyed since the beginning of the military operations in Anbar.”

“Some of the main infrastructure such as the water purification plants and power plants were also completely destroyed,” he said.

Bajari added, “Fallujah has been suffering for almost a month from complete power and water cuts, due to the damage in the power transmission lines and water pipelines.”

For his part, Hayali said, “The statistical work is not the prerogative of the organization, but we did it as it is our humanitarian duty to try to limit the damage and to report the extent of destruction affecting the city infrastructure.”