A revolutionary tribal leaders conference was held in Erbil, stirring harsh criticism from Baghdad that these armed groups are working with the Islamic State. 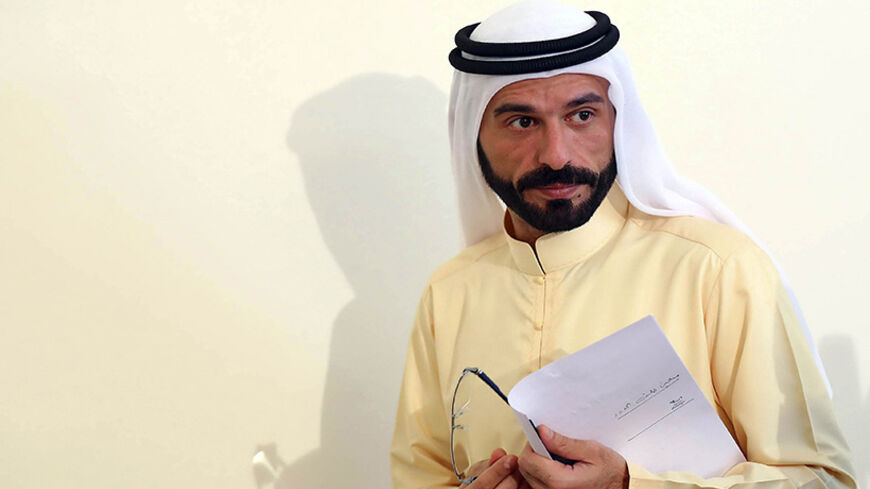 Sheikh Ali Hatem Sulaiman, head of the Dulaimi tribe, which dominates Ramadi and the sprawling desert province of Anbar, walks after the end of a news conference in Erbil, May 13, 2014.

On July 7, Iraq’s Revolutionary Tribal Leaders Conference was held in Erbil. It consisted of armed groups' tribal leaders who have cooperated with the Islamic State (IS), under the slogan of “Hand in Hand to Liberate Iraq.”

Sheikh Raad al-Suleiman, the spokesman for the conference, said, “Sunni areas have been liberated from the Iraqi government. The armed groups are seeking to liberate Baghdad, and their objective is to overthrow the political process.”

Other speakers said that they are not just asking for the ouster of Iraqi Prime Minister Nouri al-Maliki, but their intention is to push away the whole political project. It was also announced that tribal forces will not fight against IS as long as they have the same key goal of liberating Baghdad, and only then can differences be resolved. Moreover, Suleiman revealed that official communication and coordination with IS in military operations and on their overall objectives is taking place. This clearly shows that the project adopted by this conference and the presence of any armed group in the areas under IS control fall under the category of terrorist activity.

As Al-Monitor learned from a source present, the conference was held at the Jouhayna Hotel in Erbil, followed by a news conference. The source added that a large number of Sunni leaders involved in armed actions in IS-controlled areas, such as Ali Hatem al-Suleiman and Ahmad Dabbash, were present at the conference and have been residing in Erbil for some time now, as well as leaders from the Baath Party, which Al-Monitor met in Erbil.

The news that such a conference was held has caused popular rage in the southern and central parts of Iraq, where it is considered treason, as indirect cooperation with IS. This conflict has resulted in fiery statements by some Shiite political leaders in Baghdad’s government, including Maliki. The wave of statements and mutual criticism between Baghdad and Iraqi Kurdistan following this conference ended up with the withdrawal of Kurdish ministers from Baghdad on July 9.

Al-Monitor contacted a high-level government official in Erbil for clarification of the Kurdish position toward the activities of armed groups collaborating with IS on the Kurdistan Region’s territory. The source, who spoke on condition of anonymity, said, “The Kurdistan [Regional] Government is not satisfied with these activities, and there is no coordination between the local government and these groups." He justified the presence of the groups’ leaders in Erbil as the traditional honoring and respecting of guests in Iraqi society, adding, "At the same time, the Kurdistan Regional Government notified the conference’s supervisors that these activities are not welcome in any way in Kurdistan. Thus, the groups’ second conference was held in the Jordanian capital, Amman, which proves that their activity was banned in Erbil.”

Erbil has tried to be a mediator in political differences between conflicting parties in Iraq since the Iraqi government was formed after the fall of the former regime, which in itself is a positive thing that promote the convergence of views and provide realistic solutions to the conflicts and crises in the country. Erbil has succeeded on previous occasions in finding solutions and overcoming crises, as during the formation of Maliki’s second government after a 10-month delay in 2010.

Kurdistan's challenge while trying to play a positive role is trying to maintain a balance under the current circumstances, in which the Sunni and Shiite parties are heading toward radicalism. Any activity that suggests the region is taking sides with a particular radical party will weaken or end Kurdistan’s role as a mediator. This possibility would not only harm the Iraqi situation as a whole, but also threaten the relative stability in Kurdistan. If it were considered an enemy of one of the parties, this would open fronts in the conflict in the Kurdistan region.

Based on that, the Kurdistan Regional Government is asked to clearly and strictly isolate terrorist groups’ activities and to strengthen ties with all moderate parties as much as possible, to be able to assume its key role in harmonizing disparate views and reaching realistic and practical settlements in times of crisis. Iraq is currently facing one of its most difficult crises yet, in terms of obstacles to the formation of the government, at a time when a third of the country is now in the hands of IS.