As the conflict continues between Baghdad and Erbil regarding Iraqi Kurdistan's share in the state budget, there is a pressing need for the government to address other budget-related issues, namely its near total dependence on oil. 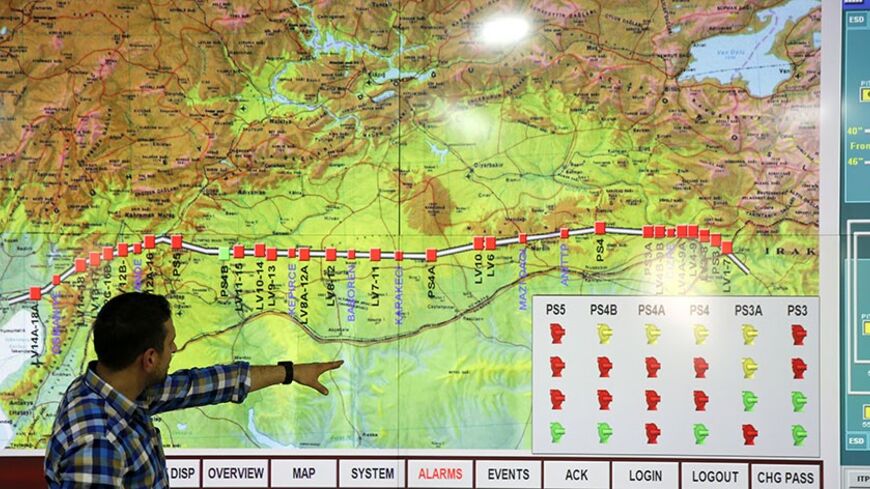 A staff member points at a screen showing a map of the Kirkuk-Ceyhan pipeline off the coast of Adana, Feb. 19, 2014. - REUTERS/Umit Bektas

The Iraqi parliament still has not been able to approve the draft general budget for 2014, prompting Prime Minister Nouri al-Maliki to warn of the possibility of a major financial crisis and a disruption of state institutions.

This delay in ratifying the budget is mainly because of the continuing dispute between Baghdad and the Kurdistan Regional Government (KRG) regarding Iraqi Kurdistan's share of the budget. According to a member of the Maliki-led State of Law Coalition, the Kurds are demanding a 17% share of the budget, without deducting the revenues they obtain from the approximately 400,000 barrels of oil the region exports daily according to Iraqi government’s calculations.

Baghdad is demanding that Iraqi Kurdistan places its oil exports under the direct supervision of the State Organization for Marketing of Oil (SOMO), which is under the authority of the central Iraqi government. The Kurdistan Region of Iraq, however, refuses to do this. For their part, the Kurdish forces argue that the central government is disregarding the constitution, which grants the region the authority to supervise its own resources, and that Baghdad is trying to deduct from Iraqi Kurdistan's share, which was decided upon in previous budgets. These forces held a meeting in Erbil on Feb. 23 and issued a statement confirming the region's right to "receive its share of Iraq's revenues." The statement noted that negotiations with Baghdad on this issue are ongoing and called on Maliki to abandon this "illegal and unconstitutional policy."

An "independent" report on the Iraqi budget prepared by the Movement for Change (Gorran) noted that the actual share the budget grants to Iraqi Kurdistan is 9.9%, and that the government expects the region to export what amounted to 400,000 barrels per day under its supervision, compared to 250,000 a day last year. According to the report, the government is demanding that auditing agencies from both Baghdad and Erbil identify and calculate Kurdish oil revenues, and that Erbil sends the amount to Baghdad on a monthly basis. These are conditions that the KRG considers to be unfair.

Furthermore, the problem has been fueled by the central government's delay in releasing the budget used to pay the salaries of public officials in Iraqi Kurdistan. This reached the point that KRG President Massoud Barzani described the measures as "a declaration of war" and claimed that the government was imposing a blockade on the region. These Kurdish accusations led Maliki to issue a statement on Feb. 28 denying the responsibility of his government for the delay of public employees’ salaries. The statement asserted that in the last years these salaries were paid by the KRG from its budget allocations, but it offered to deliver February salaries as a temporal solution and to prevent some from exploiting this issue to “instigate nationalist feelings.”

It seems that negotiations between the two sides will continue, in light of each side sticking to its position and with the approach of the general elections scheduled for April of this year. Electoral seasons in Iraq usually push political forces to avoid flexible positions, to win the support of their constituencies. The KRG's rhetoric emphasizes the injustice the region is subjected to and focuses on the emotional aspect with regard to the interruption or delay in the payment of public servant salaries. Yet, on the other hand, media outlets close to the central government speak of the need to confront the Kurds' attempts to get more of the budget than they deserve and fund their "semi-autonomous" region with oil from southern Iraq.

However, these positions do not hide the existence of divisions, particularly between the Kurdish forces themselves. Some members of parliament belonging to the Kurdistan Democratic Party (KDP) warned that Iraqi Kurdistan will make its "own decisions" if the central government does not change its stance, in reference to a threat to withdraw from the political process or secede. Meanwhile, it seemed that officials associated with the Patriotic Union of Kurdistan (PUK) were cautious regarding these hard-line positions, and one PUK official went as far as stating that the KRG is responsible for the crisis because of its "failed oil policies." Furthermore, some PUK leaders met with Maliki independently to discuss the budget issue.

However, the current problems relating to the budget are not limited to the crisis between Baghdad and Erbil, as there are other aspects that could be called "structural problems." An official from the International Monetary Fund (IMF) noted that the current draft budget does not solve the problem of Iraq's near-total dependence on oil revenues, and the potential risks this entails in the event of a drop in oil prices. The budget, which amounts to about $150 billion, assumes that oil prices will remain at $106.10 per barrel. However, it is likely that prices will drop this year, resulting in a continuation of the budget deficit. This deficit occurred for the first time last year, after multiple years of a financial surplus. The IMF official also expressed his concern that the Iraqi government may think about using cash reserves in the Central Bank to compensate for this deficit, which would weaken the currency and stimulate inflation.

In addition, there is a near consensus about the existence of another negative indicator, represented by a decrease in investments — to about 36% of the budget — alongside an increase in expenditures relating to governance. This could adversely affect efforts to improve public services and economic infrastructure. According to Gorran's report, the draft budget is devoid of an economic vision and lacks any initiatives to promote local production, diversify income sources, reduce imports and create new jobs. The budget also includes an increase in military spending at the expense of industrial and agricultural expenditure.

Based on the above, it can be concluded that the problems concerning the Iraqi budget are reproducing traditional conflicts witnessed by rentier states that are highly dependent on oil revenues. The conflict between Baghdad and Erbil is a conflict for each party's share of oil resources and how to manage them — it is not a conflict between two different economic visions. Today, the Kurdistan Region of Iraq is nothing more than a rentier region within a rentier state. The problem relating to a dependency on oil resources reveals that the financial recovery witnessed in Iraq in recent years — due to increased oil exports and high oil prices — is merely a temporary recovery. The continuation of prevailing spending methods and the absence of strategic solutions to the problem of dependence on oil will pave the way for severe economic crises in the near future.