City of Tehran’s female workers fired 'for own well-being' 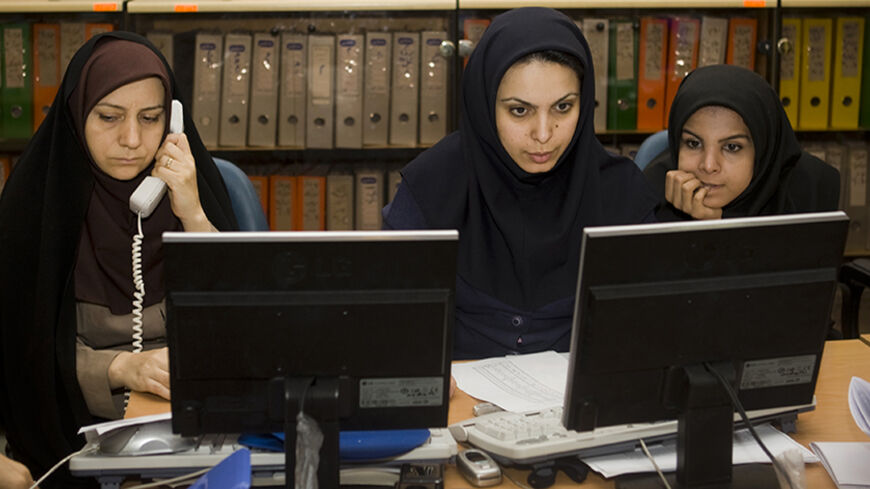 A number of female employees were recently fired by the Tehran municipality, reportedly for their own “well-being.” Both the sudden decision and its motivation shocked many at the Tehran City Council and officials managing women’s affairs in the administration of President Hassan Rouhani.

Farzad Khalafi, media affairs deputy for the Tehran municipality, told Iranian Labour News Agency July 13, “Secretarial work and office management is time consuming and lengthy, and for the comfort and well-being of women, this decision was adopted that the office manager and secretary be a gentleman.”

Khalafi continued, “The officials at the municipality may be at work until night and visit various projects, and this needs the presence of the office manager. In this case, it’s possible that women would be inconvenienced and strained and not be able to take care of their lives and family, and it’s possible there would be a disruption in their life.”

He added that there are many other women employed by the city and there is no plan to fire them.

Khalafi also said that there was no specific directive for the firing of the female workers and that the decision had been made in a meeting. Shahindokth Molaverdi, Rouhani’s vice president for Women and Family Affairs, told Reformist Etemaad that there was indeed a directive by the municipality to fire the female employees. She said that it “has not yet been implemented and no one has been fired.” Etemaad did not clarify whether it had interviewed her before the firings or if she had simply been unaware of them.

Molaverdi added, “On this issue, we gave the mayor a serious warning. We are hopeful they prevent this.”

Ali Saberi, a Reformist member of Tehran City Council, called the decision and the reasoning behind the firings a “strange act,” adding, “I implore you that whatever is done should be done based on expertise.”

Shahrbanou Amani, a former parliamentarian and current adviser for women’s affairs at the Environmental Protection Agency, criticized the move to fire female employees. She said it wasn’t clear why the decision was made but that setting limitations for women in the workplace would not help address the issue of men’s unemployment.

According Etemaad, the three women on Tehran’s City Council have not yet responded to the recent firings.

There have also been rumors that Tehran municipality would separate men and women in its offices. Khalafi told ILNA that he had “no information” on that topic.

Tehran City Council member Gholamreza Ansari said on the issue of segregation, “In a situation where a worker has no choice but to work two shifts for the financial security of one’s family, these limitations will have negative consequences and will cause corruption, bribery and fraud.”

Ansari went on, “These kinds of actions have high costs and are only propaganda … and have no relation to the spirit of our religion and ethics. Separating the sexes has been tested many times in various places, such as our universities, and it has not been successful.”