A guide to Iranian online dating

Young Iranians are turning to chat rooms — many deemed illegal by the Iranian government — to find dates or even potential spouses. 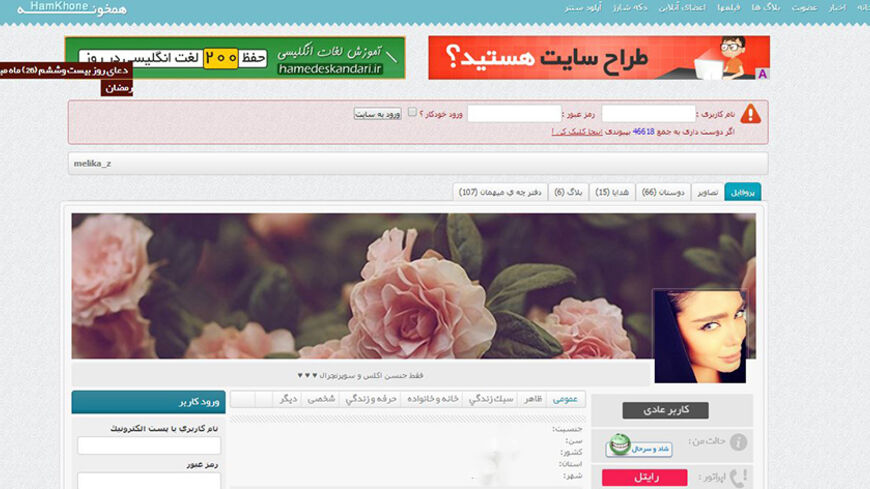 A screen shot of a profile taken from Iranian dating site hamkhone.ir - hamkhone.ir

Online dating has increasingly become a way for young people in Iran to connect, and, as of late, even get married, though the latter is still quite uncommon.

Fariba, 31, is a newly divorced attorney living in Tehran who, in a phone conversation, tells Al-Monitor she blames her divorce on online dating. Fariba found her ex-husband in an Iranian chat room and met up with him after four chatting sessions. He is a Sharif University graduate, brilliant and good-looking. "All I knew," she says, "was that he was unable to hold a job. We dated for a year and then got married. Once we moved in together on our wedding night, I found out that he is addicted to crystal meth. Had we initially met in person, this would have been very unlikely."

But, most young, tech-savvy Iranians who have found dates through chat rooms, continue to frequent these online spaces and enjoy chatting, even if it doesn't result in a real-life meeting or a serious relationship.

Match-making and dating websites are deemed illegal by the administration, so almost all the Iran-based websites for meeting people are chat rooms and not designated for match-making. To launch their sites and remain online, Iranian chat rooms require permission from the Ministry of Culture and Islamic Guidance.

Some of these websites, though legal, offer what they call "sound advice," or tutorials, on ways to find a boyfriend or girlfriend, along with detailed guides. These chat room administrators avoid trouble by simply offering guidance, as well as tips on how to be cautious and not allow others (generally men) to take advantage of you. However, some of these websites are filled with shallow popular content. 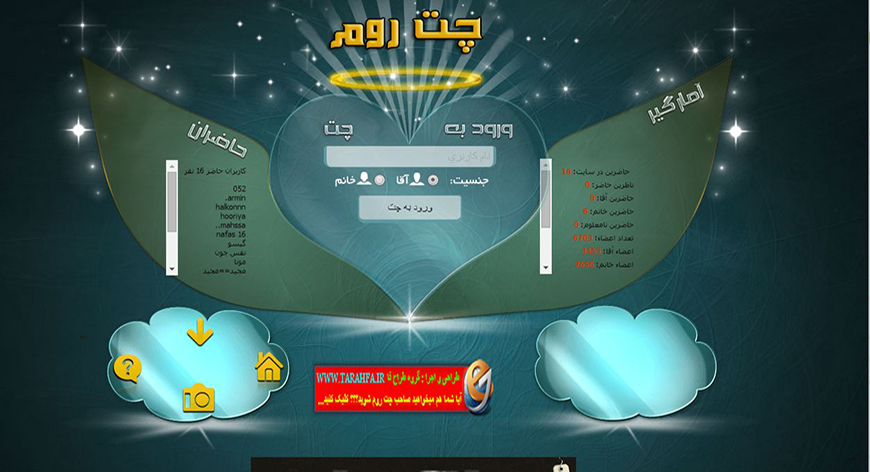 A screen capture of chatroomiranzamin.ir

Neda, a 27-year-old medical student who lives in Shiraz with parents she describes as over-protective, tells Al-Monitor the only way she can find boyfriends is through chat rooms. Neda says she has been chatting online for almost four years, and her parents don't have a clue about it, which gives her a sense of liberation.

"Since I'm on my laptop most of the time anyway, they assume I'm studying when I chat. My parents, especially my mother, are on my case 24/7, so I honestly don't know what I would have done without these chat rooms," she says. 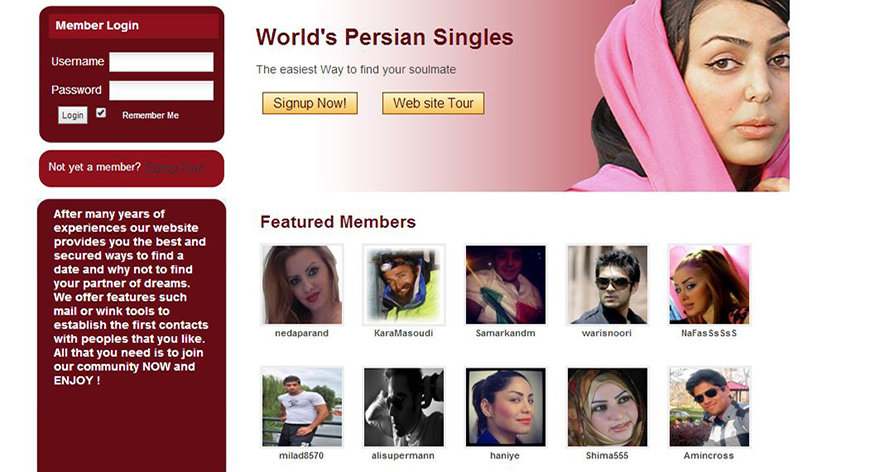 Neda says she arranges her outings before or after her classes at school, "so my mom thinks I'm spending time in the lab or have an extra class of some kind at the university."

A few active chat rooms, which are closely monitored by the government, have serious rules and restrictions, and openly warn users about the round-the-clock presence of “designated observers” who, at times, may mediate conversations.

Interestingly enough, there are a couple of religion-driven websites that connect marriage candidates in more conservative ways. Jafar Savalanpour, a 49-year-old cleric, started such a website in 2001. His website publishes marriage candidates’ details, like their physical appearance and whether or not they've been married. Then, registered members request the website to find them a suitable partner based on their information. The process usually takes a few months.

Such match-making websites are rare, however, and exist only because of their religious backing. According to the Iranian Cyber Police, or FATA, a branch of the Iranian Disciplinary Force, such websites are illegal and the ones that do exist and are active, according to FATA's spokesman, “are operated by servers outside Iran and simply rip off users.”

Reaching the managers of Iranian chat rooms proved to be a tough task. I was finally able to interview two people, both of whom agreed to be interviewed on the condition of anonymity. One chat room, geared toward "social and cultural communication and interaction," has scored the most number of long-term and serious relationships, both heterosexual and homosexual, according to its founder. There are no hard facts or credible statistics to prove this. 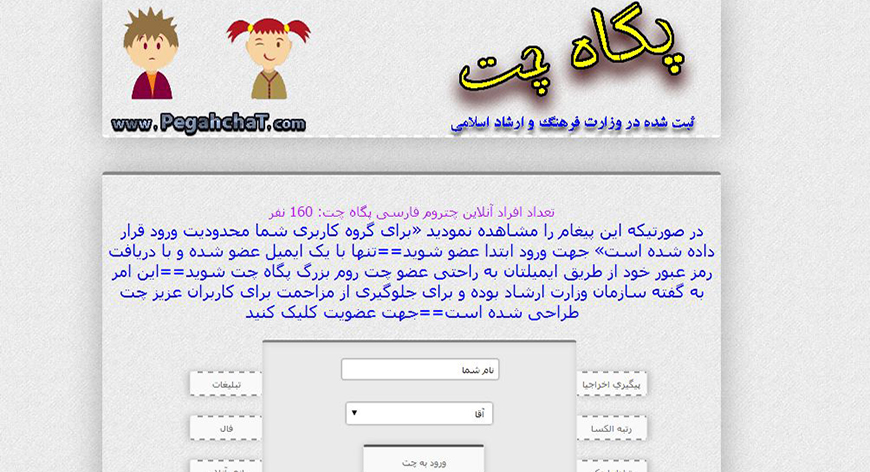 The home page of pegahchat.com

The founder of this site tells Al-Monitor, "We were the very first website — and perhaps still the only one — that, despite being legal and having a permit from the Ministry of Culture and Islamic Guidance … , broke the ground and got quite a few members of the gay population together covertly. This is what my two friends and I, the co-founders of this website, pride ourselves on the most. To start such a website, be active and even thrive on it in total freedom, like the Persian-language chat rooms and dating websites operating outside Iran, is no art. What we do in Iran, however, is a big service, sometimes including sacrifices, given the risks we occasionally take, such as letting me be interviewed by Al-Monitor and trusting your word that the name of our website would remain unpublished."

Another Iran-based website-owner, a 30-year-old software engineer who lives in Kerman, says he does all the site's technical work single-handedly. In a phone interview, the source tells Al-Monitor, "I'm making much more money than most of my former classmates. … Thanks to the website's success, I make a lot of money through ads. I cover a greater user population than the youth on the hunt for a casual, or even serious, relationship, who resort to chat rooms under the cover of other interests and activities. I cater to the younger generation's technical curiosity and love of certain kinds of electronic games as well. I answer software-related questions, too, and that is more fulfilling to me and helps me feel that I am doing a much more meaningful job."