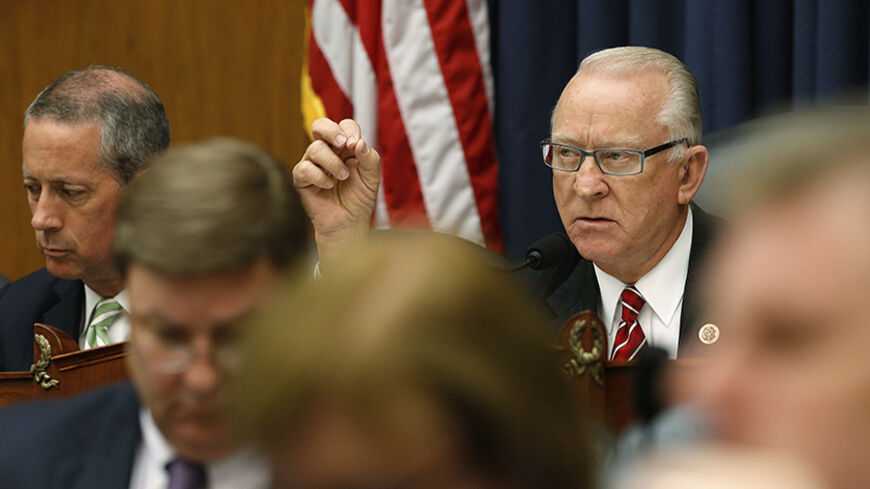 Members of the House Armed Services Committee on July 16 criticized the administration for failing to make the case for the assistance during a hearing on the president's FY2015 budget request for so-called Overseas Contingency Operations (OCO). Both Republicans and Democrats are worried that weapons could fall into the hands of Islamists battling Syrian President Bashar al-Assad, just as army equipment was captured by the Islamic State (formerly knows as the Islamic State in Iraq and al-Sham, or ISIS) in next-door Iraq.

“For the United States Congress to vote to authorize a train-and-support mission for rebel forces for Syria is a big damn deal," said ranking member Adam Smith, D-Calif., who supports the mission. "If you’re going to sell it, sell it. Because if you don’t, there ain’t no way we’re going to pass it.”

"The president has set up the $5 billion dollar counterterrorism and European funds for failure," McKeon said in his opening remarks. "We understand that these initiatives were levied on the Department by the White House without coordination, and you’re now working to develop spending plans. But while counterterrorism partnerships and reassuring our European allies are important and necessary, the resident’s approach lacks detail and is too broad in scope. I look forward to hearing your testimony today on these important matters."

Other members expressed a flat "no."

"I don't know why you need this money — it's nothing but a slush fund anyway," Rep. Walter Jones, R-N.C., said of the overall OCO budget. "We've got no more business going into Syria than I do walking from here to China. It makes no sense at all."

Administration officials did little to assuage lawmakers' concerns about the proposed Syrian mission, which is part of a $5 billion counterterrorism fund the president first announced during his West Point commencement address in May, catching lawmakers by surprise.

"I think the president felt that we know we're going to be doing something, we're just not certain what it is," said Deputy Secretary of Defense Robert Work.

The counterterrorism proposal also includes $1 billion to help Syria's neighbors deal with the refugee crisis and reinforce border security. Pentagon Comptroller Michael McCord said that a portion of the proposal would be split between the departments of state and defense.

"We would be much more focused on the border security issue and things like that," McCord said. "We're not dealing with going to refugee camps and providing assistance with our funds."

The House approved a defense spending bill with a $79 billion OCO placeholder in June, but lawmakers' concerns could imperil the Syrian aid when they try to merge their bill with the Senate's later this year. The Senate Appropriations panel is scheduled to vote on its defense spending bill, which has not yet been made public, on July 17.

The Syrian opposition wrote to top Senate appropriators on July 16 in an effort to get aid money into the bill, according to a letter obtained by Al-Monitor. The Senate Armed Services Committee passed a defense authorization bill in May that "authorizes the secretary of defense to provide equipment, training, supplies, and defense services to assist vetted members of the Syrian opposition," but any money would need to be appropriated in the spending bill.

"We are asking our friends in Congress to authorize and appropriate the proposed Department of Defense train and equip program for moderate vetted Free Syrian Army units," wrote Najib Ghadbian, the Syrian Opposition Coalition's special representative to the United States. "The United States has real national security interests at stake as the Free Syrian Army continue to lead the fight against international terrorist elements like the Islamic State. We believe that these extremists have been enabled by the Assad regime, which continues to slaughter civilians with impunity. The Syrian Opposition is ready and capable to establish a strategic partnership with the United States and our regional allies in the fight against terror."