Despite some positive moves, the future is not yet rosy for Cyprus. 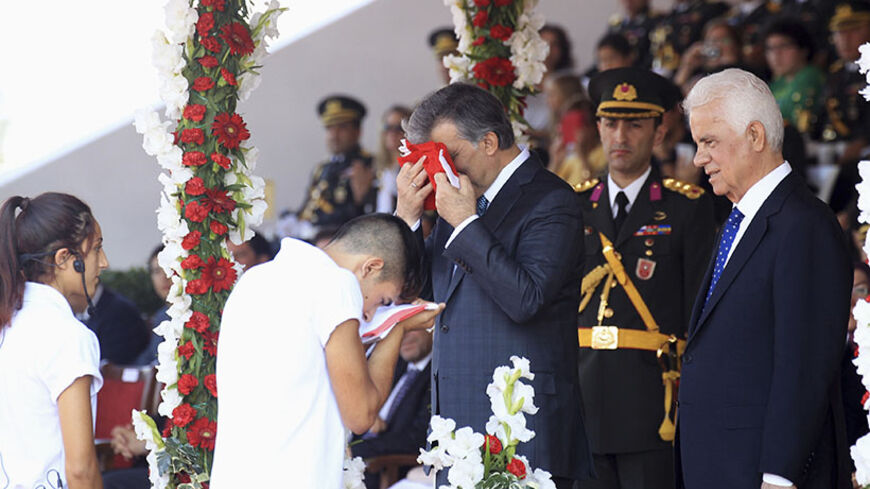 Andreas Mavroyiannis and Kudret Ozersay hold one of the toughest jobs in the world: As the chief negotiators for the Greek Cypriot and Turkish Cypriot governments, respectively, the two men are commissioned to resolve a national, territorial and humanitarian dispute that started before they were even born. Although much less violent now, Cyprus bears similarities to other conflicts in the Levant, especially Israel-Palestine, the Shiite-Sunni divide and the Kurdish question. Just like the mediators of those conflicts, it is unclear whether Mavroyiannis and Ozersay can break the deadlock and broker a peaceful future for the Mediterranean island.

Problems in Cyprus first emerged in 1954. Exasperated with Britain’s colonial rule at the time, the island’s Greek majority undertook acts of civil disobedience and political violence against British authorities. The Turkish Cypriot minority, uncertain of their future in a Greek Cypriot-dominated polity, wanted Britain to stay; they, too, ended up on the receiving end of the majority’s wrath. Although tensions between the two groups subsided after independence in 1960, major fighting did break out in 1963-64 and 1967, both of which featured the “motherlands” of Greece and Turkey. Ethnic tensions again flared up in July 1974 when a Greek nationalist junta overthrew Cypriot President Archbishop Makarios III with the aim of unifying the island with Greece. Fearful of being outflanked by its NATO ally, Turkey sent its military forces to Cyprus.

For 40 years, the island has remained divided amid a quiet but sullen peace. Successive efforts for reunification have failed because the two sides remember their history too well and do not trust each other because of it.

Mavroyiannis and Ozersay reflect this. Like most of his fellow Greek Cypriots, Mavroyiannis, who was a teenager in 1974, perceives Turkey’s presence on the island as an occupation. For many Turkish Cypriots such as Ozersay, whose father, Huseyin, was executed by a Greek Cypriot death squad two months before the Turkish military arrived and who was 8 months old when the island was divided, 1974 marks a second chance in life.

Fast forward 40 years and the citizens of both the Turkish Republic of Northern Cyprus (which only Turkey recognizes) and the Greek Cypriot-dominated Republic of Cyprus (which only Turkey does not recognize) both feel shortchanged. Greek Cypriots, a substantial number of whom lived in the Turkish-controlled north before 1974, demand the return of their homes and maintain a brutally effective embargo against Turkish Cypriots. Turkish Cypriots, though more secure than they were in 1954-74, are slighted by the Greek Cypriot-backed international embargo, which makes it onerous for them to trade and travel around the world.

Luckily, there are some positive changes. Turkey, once the bane of both mainland Greeks and Greek Cypriots, has overcome many of its insecurities. In 2004, the government of Recep Tayyip Erdogan endorsed a UN-brokered peace and reunification plan. More recently, Ankara welcomed Mavroyiannis and his colleagues to exchange views, the first time since 1974 that Turkish officials have agreed to meet Greek Cypriot diplomats. A public opinion poll taken in May showed that a majority of mainland Turks would prefer a diplomatic solution to the dispute.

Greece, too, is doing its part: On the same day that Mavroyiannis met with Turkish diplomats in Ankara, Greek Foreign Ministry officials sat down with Ozersay and the Turkish Cypriot team in Athens. Amid economic and political uncertainty, the people of Greece seem hardly interested in annexing Cyprus.

Several factors explain these shifts. The most important is the “Nixon effect” in Cyprus. Both Turkish Cypriot President Dervis Eroglu and his Greek Cypriot counterpart, Nicos Anastasiades, lead center-right governments. Ozersay has argued that having nationalists in power on both sides of the island provides him and Mavroyiannis with political cover that would have been otherwise unavailable under liberals or leftists.

The other reason for the diplomatic momentum in Cyprus is natural resources. As Al-Monitor columnists Tulin Daloglu and Semih Idiz pointed out a few months ago, both sides in Cyprus feel it would be more beneficial for them to share the spoils of newly-discovered offshore gas deposits than to initiate hostilities that could literally and metaphorically blow up the island. Add to that the proximity of energy-hungry Turkey as a ready export market, and establishing a functioning common state looks like a good alternative for the peoples of Cyprus. Ankara, for its part, hopes that building a pipeline that would bring water from southern Turkey into water-poor Cyprus would sweeten the deal for both sides on the island.

Despite such promising scenarios, however, the picture for Cyprus is not rosy. The Greek Cypriot government, a member of the European Union, continues to remind Turkey that its prospects for joining the European club are conditional on its good behavior in Cyprus.

Meanwhile, Ozersay insists that his side would not agree to reunification unless they have “Turkish guarantees to ensure stability on the island” (read: a much smaller but effective military contingent from the mainland). Ozersay is probably looking around and thinking that it is a tall order to expect the United Nations to step in if political order in Cyprus breaks down in the future and the international body fails to prevent violence on the island the way it is failing in Gaza, Syria and Ukraine today. The Turkish Cypriot negotiator is also likely recalling the conversation between former Turkish Cypriot President Rauf Denktas and Palestinian leader Yasser Arafat. “You’re lucky to have world opinion support your bid for independent statehood,” Denktas once told Arafat. The Palestinian fighter reportedly corrected the Turkish president, arguing that he would rather have a sponsor such as Turkey than the ineffective Arab League.

Interestingly, much like Israel and Palestine, both groups in Cyprus see themselves as the victim and the other side as the aggressor. We have to wait and see if Andreas Mavroyiannis and Kudret Ozersay will create a peaceful and just order in Cyprus to replace the old habits and bad memories of the past.