US Secretary of State John Kerry got himself stuck in the Middle Eastern quagmire when he failed to understand that a cease-fire must be accompanied by a comprehensive agreement between Israel and the Palestinians, or else fighting will resume. 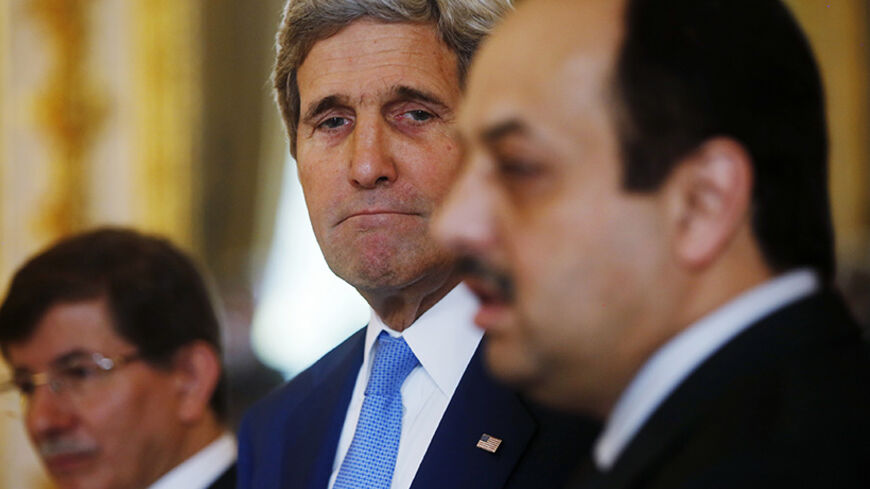 US Secretary of State John Kerry (C), stands next to Qatari Foreign Minister Khaled al-Attiyah, (R) and Turkish Foreign Minister Ahmet Davutoglu in Paris as they make statements regarding a cease-fire between Hamas and Israel, July 26, 2014. - REUTERS/Charles Dharapak/Pool

It is fairly safe to assume that the way US Secretary of State John Kerry is handling the crisis in Gaza will not earn him the Nobel Peace Prize. Not really because he preferred to follow the Turkey-Qatar axis over the Egypt-Saudi Arabia axis.

His failure is far worse than that. When he chanced into an opportunity to convert the military dead end into leverage for a diplomatic breakthrough, the US secretary of state got stuck in the Middle Eastern quagmire like some new recruit.

Instead of bolstering the status of Palestinian President Mahmoud Abbas as the key to resolving the conflict, Kerry played into the hands of Israeli Prime Minister Benjamin Netanyahu, who would prefer to manage the conflict. Kerry failed to realize that Israel’s prime minister has gotten himself caught by what the German philosopher Georg Wilhelm Friedrich Hegel diagnosed over two centuries ago as the “powerlessness of the victor.” That powerlessness is written on the walls belonging to each ruined house in Gaza, where dozens of defenseless civilians lie buried beneath the rubble. And it is written in the 56 death announcements of Israeli fallen soldiers that appeared on homes and streets throughout Israel.

Even after three weeks of bombing, more than 1,000 casualties and about 400,000 displaced people, Hamas is still firing rockets directly into the heart of Israel. The country’s political and security leadership have come to realize that a military solution would necessitate retaking the entire Gaza Strip. But that would also mean assuming responsibility for the well-being of 1.8 million poor and unemployed Palestinians, who are physically and emotionally vulnerable.

Should it fall under Israeli control, Gaza would become an unruly arena, drawing in the arch-fundamentalist elements, and the phenomenon would metastasize to engulf the West Bank, too. If that happens, a new intifada could erupt in the West Bank, bringing about the downfall of the Palestinian Authority (PA), Abbas and their diplomatic strategy. Cooperation with Egypt, Jordan and Saudi Arabia would come to a halt, and Israel’s relationship with the United States, Europe and the rest of the world would be harmed as a result. Furthermore, it is essential to consider that all of the above comes without any mention of the number of casualties that the occupation of Gaza would produce on both sides.

Netanyahu is fully aware of this horrific scenario. There are good reasons why he is pushing away his political partners, chief among them Foreign Minister Avigdor Liberman (who was, until recently, highly regarded as Washington’s darling), who advocates the reconquest of Gaza. In contrast, the prime minister would accept instead a more modest objective: the demilitarization of Gaza. That is, in fact, a worthy objective. Barely a month has gone by since Netanyahu used a lecture he delivered to the Institute for National Security Studies on June 29 to announce that, “In every future arrangement, Israel will be forced to control the territory up to the Jordan River for a very long time.” What territory does Netanyahu mean, when he says that Israel will continue to control it for a very long time? Even now, the Israel Defense Forces shoots at any Gaza farmer who approaches the security zone that Israel demarcated to the west of the security fence. Netanyahu also said that the demilitarization of the Palestinian state is a condition for any two-state arrangement. Who will oversee the demilitarization of the Gaza Strip and ensure that Hamas does not redig its network of tunnels and renew its stock of rockets and launchers? At the same time, the prime minister said, “Time after time, we have seen how local forces trained by the West to stop the Islamists cannot be relied upon following the departure of those Western forces.”

Kerry ignored this minefield, lying right at Netanyahu’s feet. He failed to lead the prime minister back to the diplomatic arena, where Abbas and the Arab League’s peace initiative were waiting. Unfortunately, instead of concentrating on Abbas' weak situation, the Obama administration made do with another temporary filling. By doing so, the administration has enabled the chief of Hamas' political bureau, Khaled Meshaal, to keep biting simultaneously at Netanyahu and the chairman of the PA. It has allowed him to drive a wedge between Israel and the United States, while Hamas enters the fray between Turkey and Qatar and their rivals in Egypt and Saudi Arabia.

Mati Steinberg is a Middle East expert who has served as an adviser to four heads of the Shin Bet. He is convinced that the futility of any military victory and limitations preventing Israel from deploying its military superiority on the battlefield lie at the root of the current Hamas strategy. The group’s greatest nemesis is a diplomatic arrangement, since that would tug the groundswell of public support out from under its feet and transfer that support to the pragmatic camp. The approach of arranging a series of cease-fires between rounds of fighting has absolutely nothing to do with reaching a diplomatic arrangement, and therefore plays into the hands of Hamas. Having no other alternative, the desperate people of Gaza are forced to support the organization. From there, it is a very short road to violence, and to Hamas control of the West Bank and East Jerusalem.

It should be remembered that Hamas joined the reconciliation government when it was desperate and mostly isolated, and that the new government was committed to the Arab League’s peace initiative and to the three principles of the Quartet: recognizing the State of Israel, abiding by past agreements between Israel and the Palestine Liberation Organization (PLO) and renouncing violence. That happened after the Sisi regime intensified the siege of the Gaza Strip and dealt the tunnel industry a serious blow. The Ismail Haniyeh government’s inability to pay salaries or provide basic services diminished public support for the regime. Should the fighting continue, the economic and political scenario that Hamas is likely to face will be far worse.

It is time for US President Barack Obama to call Netanyahu and tell him, “Bibi [Netanyahu], I realize that you want to demilitarize Gaza. Please, the Arab League is ready to send in troops to disarm Hamas and reconstruct everything that you destroyed. But there are a few preconditions. Their forces will fall under the command of the PA’s security forces in Ramallah, which we have trained and armed. I can clearly recall how you attacked me for agreeing to cooperate with the Palestinian reconciliation government and how you put a freeze on the diplomatic process. Well, now you will also have to collaborate with that government in all spheres, and that includes a return to negotiations over a permanent solution based on the Arab peace initiative. You will finally have to show where Israel’s eastern border will run, including in Jerusalem, and you will have to provide a timetable for the evacuation of settlements and an Israeli withdrawal from the West Bank. Yes, I know you have a problem with your Bennetts [Economy Minister Naftali Bennett] and Libermans, but the way I see it, if the people are willing to go all the way with you when it comes to war, I am confident that they will go all the way with you when it comes to peace.”