Thousands of Israelis came to the funerals of Sean Carmeli, Jordan Bensemhoun and Max Steinberg to show solidarity with the fallen soldiers who had immigrated to Israel alone. 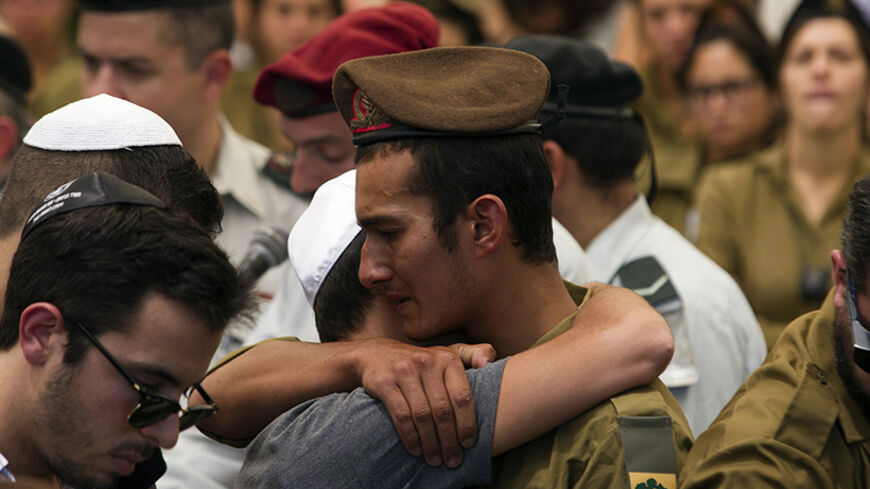 An Israeli soldier from the Golani Brigade mourns during the funeral for fallen comrade Max Steinberg at Mount Herzl military cemetery in Jerusalem, July 23, 2014. - REUTERS/Siegfried Modola

Of all the stories of soldiers killed in battles between Israel and Hamas, three seem to have captured the hearts and minds of Israelis. They cried for them as though these were members of their families, accompanied them to their final resting place as though they had been an integral part of the boys’ lives. Few in Israel knew the three, and were it not for the war they likely would never have heard of them. This is the story of three young Jews who bid farewell to their parents and family, moved to Israel, joined the Israel Defense Forces, served in one of its leading combat units and found their deaths in war.

The first to go was Nissim Sean Carmeli on July 20. At the age of 16 he took leave of his family in Texas and came to Israel. Two years later he enlisted and volunteered for the Golani Brigade, one of the military’s top combat units. His friends described him as an introverted young man who was shy around his Israeli-born “Sabra” friends. They spoke loudly and displayed self-confidence; he spoke quietly, even in a whisper, part of the legacy he brought with him from the United States.

When he was killed, it came out that he had been a “lone soldier,” a soldier in Israel without his parents living in the country, often a new immigrant on his or her own. His parents lived in the United States. Before the war, he had time to contact them. Immediately after the fighting began, he fell silent. Like most of the soldiers, Sean was required to hand over his cell phone. After his parents were informed of his death, they got on a plane and made their way to Israel. News of the death of this lone soldier shocked Israelis. Entire families were glued to their television sets, as they are at such times, and anxiously followed the military’s every move and every piece of information about casualties. They felt sorrow for Carmeli’s loneliness, in life and especially in death at only 21.

In a matter of hours the call went out on social networks, appealing to people to accompany the lone soldier to his final resting place. Since he was a fan of the Maccabi Haifa soccer club, fans were asked to turn up for the funeral. Thousands of soccer fans and others announced they would be coming to the cemetery in Haifa, and that’s exactly what happened. Toward 11 p.m. on June 21, tens of thousands crowded into the military cemetery at the entrance to Haifa. Apart from his parents and a few other family members, no one from among the thousands had known Sean in life. How ironic that it was his death that brought them together.

His parents, Alon and Dalia Carmeli, wept when his coffin was placed beside his grave. His sisters could barely stand, they were so crushed. When his coffin was lowered into the grave, thousands sobbed. The mourners wept for the lone young man they had not known, feeling that he had fought for them as though he were a relative who had died defending his homeland. “Sean was a loved boy. He was not a lone soldier. He was anything but lonely. He was a hero,” his aunt Lennie Buganim wrote on the Facebook page created by the family.

The next day, a similar scene took place at the funeral of Jordan Bensemhoun, another lone soldier from the Golani Brigade killed in Gaza. His parents and other family members, who live in France, had made their way to Israel upon hearing of their son’s death. Jordan, whose Hebrew was not yet fluent, was accorded a hero’s status in the town of Ashkelon. The call that went out on social media brought out thousands to the municipal cemetery. They marched behind the coffin of the introverted young man who spent most of his life in France before immigrating to Israel and joining the army. His mother clung to the coffin for a long hour with all the force left in her before it was lowered into the ground. Her wails swept up thousands, who cried for the boy they had not known until he went to his death at the age of 22.

One mourner, Sharon from the town of Kiryat Gat, told the local Ashkelonet website: “I felt I had to be here. There is something special in seeing this crowd coming to take part in the funeral of a person they did not know.”

Those who attended the funeral of Max Steinberg said they had never seen such a gathering. Like Sean Carmeli and Jordan Bensemhoun, Max Steinberg, a 24-year-old Los Angeles native, decided to start a new life in Israel. He first came on a tour with "Birthright Israel," which brings young Americans and others of Jewish heritage to visit Israel, and fell in love with the country. Two years ago, he moved to Israel on his own and enlisted in the Golani Brigade. As he was in Israel without his parents, the army designated him a lone soldier.

When word of his death spread, the call went out over the social networks urging the public to see Max off to his final resting place. According to police estimates, some 20,000 people showed up at Carmeli’s funeral, 10,000 came to Bensemhoun’s and more than 30,000 mourners came to see off Steinberg. The military cemetery on Mount Herzl in Jerusalem had seen such turnouts only at the funerals of exalted rabbis.

Steinberg’s final journey was also his parent’s first visit to Israel. When asked where they wanted to bury their son, they answered “Israel.”

Hezi, another attendant at the funeral, told Israel Hayom that he did so “to show his family that they are not alone. He may have been a lone soldier, but we are all with him. This shows the solidarity we have here.”

The three lone soldiers had migrated to Israel but had yet to fully experience the country and learn its language. Their lives were cut short in the war in Gaza and their deaths swept up an entire nation that discovered new heroes. Their alone-ness, it seems, helped turned their sacrifice into an act of heroism.