The Israeli public reacted to a war that dragged on without a clear victory and showed unprecedented solidarity with the troops without the peace protests present during previous conflicts. 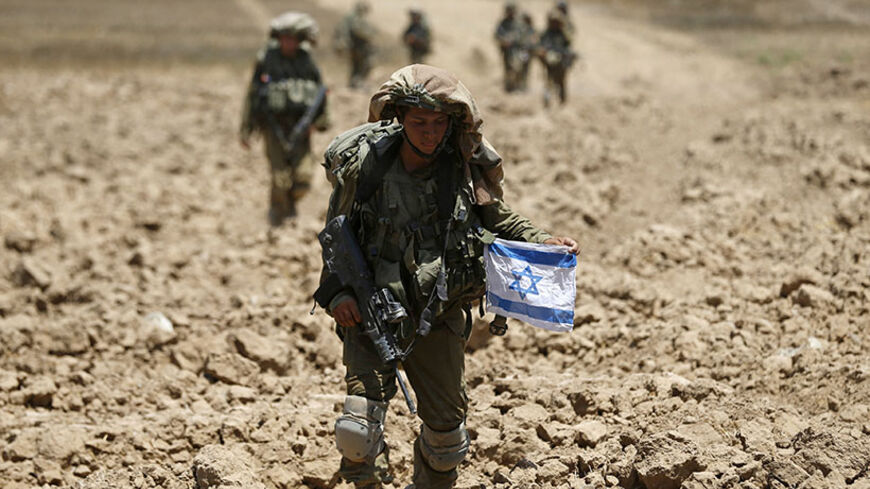 The Gaza war quite a strange one. It exposed Israelis to phenomena unlike anything they had known in the past. Demonstrations of solidarity within the public at large emerged side by side with deep disagreements among the decision makers. Much like all other wars, it started with a complete accord, but ended up with doubts concerning its objectives. When ended, almost no one was able to respond as to what was its goal to begin with. The war with Hamas provoked the evacuation of most of Israel's southern communities. While the state encouraged the residents to stay put, the later reached the conclusion that they cannot rely on their country. They picked up their children and a few suitcases and abandoned their homes, until calm is restored. Here are several other central phenomena exposed by the 2014 war:

Very few military campaigns in Israel have been anywhere near as long as the Gaza war of 2014. The Israelis, used to wars lasting a few days or a few weeks at the most, had a hard time coping with Operation Protective Edge. Almost every day an attempt was made to shorten this war through some cease-fire or other. Not even a week had passed before the public started to wonder whether the time hadn’t come to stop it altogether. Yes, there were wars that lasted longer, but the war in the Gaza Strip was called an “operation” — that is, an abridged and partial version of full-fledged warfare. By its second day, on July 9, experts already began appearing in TV studios to announce that the Israel Defense Forces (IDF) had won the war, and that it was time to withdraw the troops.

The length of this war impacted almost every family in Israel, not least because almost every family sent a soldier to the front. No other war has stirred up as much anxiety as the limited operation in Gaza. Israelis started to see the Gaza Strip as a game of “Palestinian roulette,” which could end with a soldier dead in the most incidental and unexpected way. That is why almost all Israelis hoped that this war would end quickly. Being familiar with the Israeli impatience in regard to lengthy wars, the prime minister and the top military brass, headed by the chief of staff, tried to end the campaign as quickly as possible. On the other hand, the Palestinians were also well aware of how impatient Israelis are, so they did everything they could to draw it out, hoping to exhaust Israelis in the process. After all, there is nothing like a war of attrition to exhaust Israeli moral. “Against their attrition, they will be struck very hard,” Prime Minister Benjamin Netanyahu promised in a news conferences on Aug. 24, reflecting the mood among Israelis.

According to a poll that was published Aug. 27 in Israeli daily Haaretz, 54% of Israelis believe that neither side won in this war, while only 26% believe that Israel won. So here is another phenomenon, which was unlike anything that had been seen in any of Israel’s other wars, including the 1973 Yom Kippur War. After all, that war may have cost the lives of more than 2,500 soldiers, but it was also considered an unprecedented military victory. This war, on the other hand, was the first time that Israelis confronted the deceptive nature of modern warfare: no winners, no defeated.

Though the number of Palestinian casualties was disproportionately higher than the number of Israeli casualties, most Israelis were forced to come to terms with the fact that the results of modern warfare are measured in terms of diplomatic achievements, and not military achievements. When the final tally is made, it will appear as if the war gave the Palestinians of Gaza more than they could ever have achieved in any other way. This reinforced the feeling among the Hamas leadership that if you want to get something out of Israel, you have to use force. They said so whenever they had the opportunity. It looks like they were right.

The war in Gaza gave birth to an ethos of solidarity among Israel in such great intensity, unlike anything ever experienced before. The entire society, apart from isolated individuals, gathered behind the troops, and went out of its way to express its love for the soldiers. Anyone in uniform was seen as a veritable Robin Hood. Anyone who came home on leave after serving in the sand dunes of Gaza was treated like royalty. After years in which the image of Israeli soldiers had been eroded, they went back to being real heroes, ready to sacrifice their lives in defense of the country. Admiration for the troops knew no bounds. It was especially evident in the military funerals for soldiers who fell in the Gaza Strip. I’ve been to many military funerals in my life, but never before have I seen the military cemeteries look like the sites of mass demonstrations, which is exactly what happened in this war.

Every death drew thousands. Every lone anonymous soldier who was killed had thousands of mourners following his coffin to its final resting place. People flocked to these funerals, even if they took place in the middle of the night. It didn’t matter that the crowds didn’t know who the fallen soldier was or anything about his life. I saw these crowds surround the grave after the ceremony, while wrapping themselves in the Israeli flag. Many of them sobbed as if the fallen soldier was a close relative, like a brother or a son. Long after the official ceremony was over, they remained there, holding their own makeshift ceremonies around the new grave. There were those who called this a dangerous worship of death, but the Gaza war fostered such a deep sense of anxiety that every death seemed to be portrayed as a national death.

What happened to the protests?

What made this a strange war was the fact that it was not interrupted, not in the middle of the war and not at its end. Almost every other military campaign manages to bring lots of Israelis to the streets to protest against it. There are professional protesters, who don’t even wait a day before taking over the nearest public square to express their disapproval, and there are demonstrators who start joining them there as the images of the war get more shocking, and the number of casualties goes up.

The First Lebanon War in 1982 brought hundreds of thousands to the main square in Tel Aviv. There, they chanted until they were hoarse against Prime Minister Menachem Begin and his Defense Minister Ariel Sharon. They even called Sharon a “murderer.” The Second Lebanon War in 2006 also brought tens of thousands to the squares demanding that the fighting stop. This expedited the removal of the people behind that war from power, including the prime minister, the defense minister and the chief of staff. During the most powerful anti-war demonstration of all, in 1973, soldiers went straight from the battlefield to take over the government compound in Jerusalem, demanding that the leaders of the state be fired for their role in what they called “the fiasco.”

The last war in Gaza broke with this tradition. Even the left wouldn’t dare gather in Rabin Square to protest during the first month of the war. Any effort to organize was portrayed as being potentially harmful to the fighting spirit of the troops. That left both the Labor and Meretz parties, as well as all the left-wing movements, out of a job. It took a month of fighting before thousands showed up in Rabin Square in Tel Aviv to protest the war. It is almost certain that one reason the protest movements held back was the enormous support of the war in Gaza, at least at the beginning. Polls showed that almost nine out of every 10 Israelis were completely behind the war when it began. With a figure like that, it was no wonder that only few dared to take such a risk.