Prince Turki Al Faisal writes that Israeli brutality in Gaza and mistakes by Hamas' leadership have destroyed an opportunity to end the conflict between Israel and Palestine. 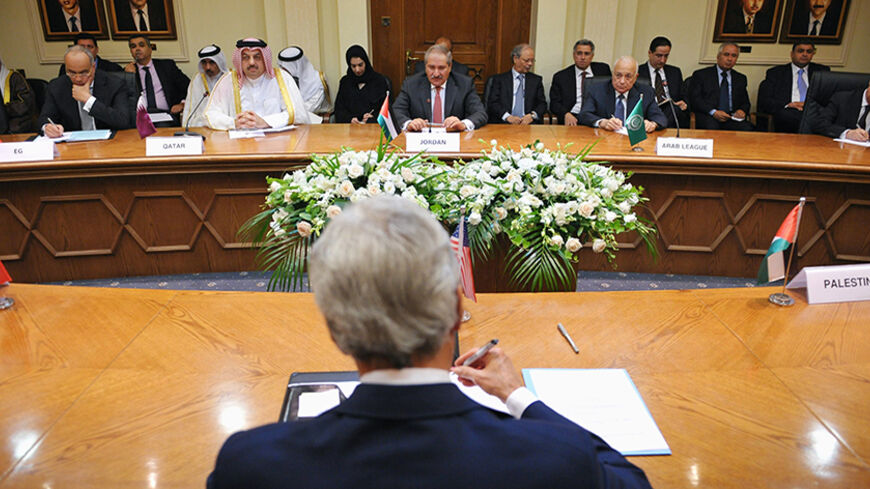 US Secretary of State John Kerry (back to camera) meets with the Arab League Peace Initiative at the Ministry of Foreign Affairs in Amman, July 17, 2013. - REUTERS/Mandel Ngan 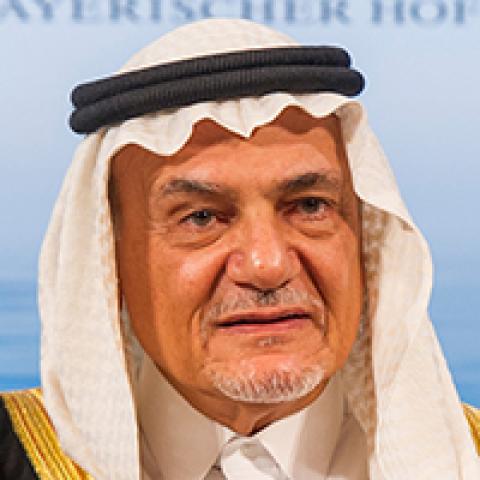 As recent events so blatantly display, the Israeli government has ignored the Arab Peace Initiative and fully committed itself, as well as the Israeli and Palestinian people, to continuous conflict, bloodshed and suffering. A replay of the broken record of killing and counter-killing was inevitable the minute the Israeli prime minister shot down US Secretary of State John Kerry’s efforts to restart negotiations between him and Palestinian President Mahmoud Abbas. Based on Benjamin Netanyahu's accusation that Hamas abducted and killed three Israeli settlers, Israeli security forces have rampaged the West Bank, arresting hundreds, including Hamas members of the Palestinian assembly, and killing a number of Palestinians in the process. The killing and burning of a Palestinian teenager by three Israelis, two of whom were settlers, then merely added to the bloodshed and exacerbated the situation.

Of course, blood has been spilling throughout the region since the passing of the UN Security Council’s Resolution 242 calling for Israeli withdrawal from the territories occupied in 1967. The resolution also stipulated that the occupation of land by armed force is unacceptable, thus denying Israel any legitimacy in its attempts to justify holding onto the occupied regions. Yet, as history continues to repeat itself in savage cycles, the firing of rockets from Gaza was simply another response to Israeli belligerence, now under the guise of Netanyahu. The subsequent military assault we are currently witnessing as Israel’s response to these strikes has murdered hundreds of innocent Palestinians whom no callous and self-serving words of condolence can return to life.

The automatic support that American and certain European governments have given to Netanyahu is equally callous and self-serving. Pressing the Israeli prime minister to accept Kerry's proposals would have done more to prevent the present massacre of Palestinians, but instead these governments continue to stand by Netanyahu in his barbaric assault on innocent civilians. Not only does this represent a wholly unacceptable show of support for state-sanctioned murder, it also provides a stage for the hypocrisy of these Western leaders who expend more long-winded grief on the murder of three Israeli settlers than they do on the deaths of hundreds of Palestinians.

At the same time, Hamas has repeated its past mistakes. The rockets it lobs at Israel, even if they reach Tel Aviv, do no harm to Israel and hinder the Palestinian cause. The disparity between Israelis killed by rockets and the Palestinians annihilated by Israel's superior and indiscriminate firepower should not be ignored, even for the pursuit of just political ends.

When Hamas accepted, then refused, then claimed to seek adjustments to the Egyptian proposal, it gave Netanyahu what he sought from the beginning: the opportunity to appear reasonable and justified and thus cast a smokescreen over his foot-in-the-mouth blunders. Knowing that Gaza's citizens would endure insufferable amounts of killing should have checked Hamas' hubris, but it did not. Being willing to cause so much suffering before the inevitable return to “hudna,” or cease-fire, shows the depths of indifference to which Hamas has fallen. Hamas' ill-advised alignment with Qatar and Turkey is another miscalculation. The leaderships of those countries look more to how they can deprive Egypt of its rightful leadership role rather than the stopping of Netanyahu's meting out death and destruction to the people of Gaza.

This is all the more unfortunate because the Palestinians in the West Bank and Gaza had looked upon the reconciliation between Hamas and Fatah as a means of relieving their pains. Hamas' agreement to remain outside the government gave them further hope that things would get better. Now, the opposite has happened. One can only dream they will be successful in arranging a more prudent leadership.

When I published a July 7 op-ed in the Israeli newspaper Haaretz, titled “Peace would be possible with the Arab Peace Initiative at its core,” I expressed the hope of so many around the world. The vision of the Arab Peace Initiative — the end to hostilities between Israel and the Arab/Muslim worlds — would enable normal relations among the peoples of the Middle East. Alas, the present conflict and tragedy has dampened that hope. During the first Israeli assault on the people of Gaza in 2006, I wrote that we are all Gazans now. Today, I repeat that statement without hesitation.

May God deliver the people of Gaza from their present unendurable sufferings at the hands of an Israeli prime minister who takes pride in flexing his brutally murderous military machine. May He also provide the Palestinian people with leaders who set their yearning for incessant war aside and do what is necessary to deliver their people unto peace. Moreover, may we all some day live in a world free of the atrocities that now befall the occupied lands of Palestine.