Why Islamic State has no sympathy for Hamas

The Islamic State does not regard fighting Israel as legitimate and calls instead for first "purifying" the Islamic world, including challenging Hamas. 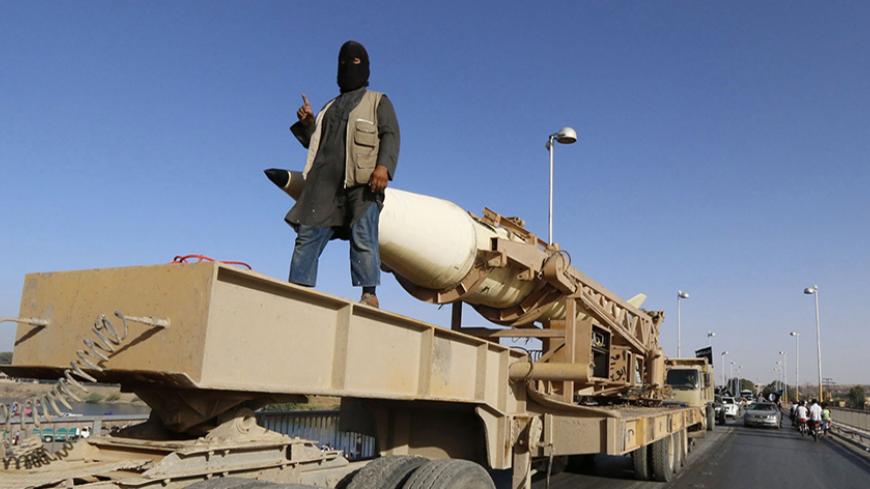 An Islamic State fighter gestures as he takes part in a military parade along the streets of Syria's northern Raqqa province, June 30, 2014. - REUTERS

Most of today's Salafist jihadist movements have no interest in the Israeli-Palestinian conflict, for the time being regarding it as irrelevant. Instead, their call is to engage in intense, bloody confrontations involving bombings, executions, and suicide attacks against governments headed by Muslims and against Muslim civilians.

Al-Qaeda has followed this course for decades, and now the Islamic State (IS) is following in al-Qaeda's footsteps, fighting a brutal war across swaths of Iraq and Syria and in an effort to “purify” these areas through killings and population displacement. Once taking territory, it is not mobilizing the populations under its control in opposition to the Israeli military operations in Gaza. Why is this?

Some jihadists or pro-jihadist Salafists have issued video clips and tweets explaining their lack of assistance to the Palestinians. One tweet stated, “The Hamas government is apostate, and what it is doing does not constitute jihad, but rather a defense of democracy [which Salafists oppose].” Another tweet said, “Khaled Meshaal: Hamas fights for the sake of freedom and independence. The Islamic State: it fights so that all religion can be for God.” Meshaal is head of Hamas' political bureau.

On July 22, the Egyptian Salafist sheikh Talaat Zahran declared that it is inappropriate to aid the people of Gaza because they do not follow a legitimate leadership, and because they are equivalent to Shiites since they follow them, referring to Hezbollah and Iran, with which the Sunni Hamas movement has been allied. Thus the jihadists' position is not simply a political stance, but stems from Salafist theological principles.

Salafists believe that jihad must be performed under legitimate leadership. This argument is advanced through the “banner and commander” concept, which holds that whoever undertakes jihad must follow a commander who fulfills the criteria of religious and political leadership and has raised the banner of jihad. Given that there is neither a legitimate leader nor a Salafist-approved declaration of jihad in Palestine, fighting there is forbidden.

In addition, for Salafists, if non-Muslims control Islamic countries and apostates exist in the Islamic world, the Islamic world must be cleansed of them before all else. In short, the purification of Islamic society takes priority over combat against non-Islamic societies. On this basis, Salafists see conflict with an allegedly illegitimate Hamas government as a first step toward confrontation with Israel. Should the opportunity for military action present itself in the Palestinian territories, Salafists would fight Hamas and other factions deemed in need of “cleansing” from the land and engage Israel afterward.

This approach has its roots in Islamic history, which Salafists believe confirms the validity of their position. Relevant points of historical reference include the first caliphate of Abu Bakr, which gave priority to fighting apostates over expanding Islamic conquests, which occurred later, during the second caliphate, under Umar bin al-Khattab. Likewise, Saladin fought the Shiites and suppressed them before he engaged the crusaders in the Holy Land.

Salafists today see that their priority as fighting Shiites, “munafiqin” (dissemblers, or false Muslims) and apostates, whom they call the “close enemy.” During the current war in Gaza, a number of IS fighters have burned the Palestinian flag because they consider it a symbol of the decline of the Islamic world, which succumbed to national divisions through the creation of independent political states. In Salafist doctrine, the entire Islamic world must be united under a single state, an Islamic caliphate, which IS declared in late June.

Salafist groups active in Gaza have engaged in various rivalries with Hamas there, but they have not succeeded in establishing a foothold of any significance. Some groups have posted video clips acknowledging their support for IS following the group’s recent victories in Iraq and Syria. The main dispute between Hamas and Salafist groups rests on their disparate principles. Hamas is more realistic and pragmatic than the jihadist Salafists. The former has political priorities in liberating Palestinian land, whereas the latter has religious priorities in the establishment of a totalitarian Islamic caliphate and considers the Israeli issue secondary to this central goal.