The Islamic State robbed Christians of their money and valuable possessions as they forced them from their ancestral home in Mosul. 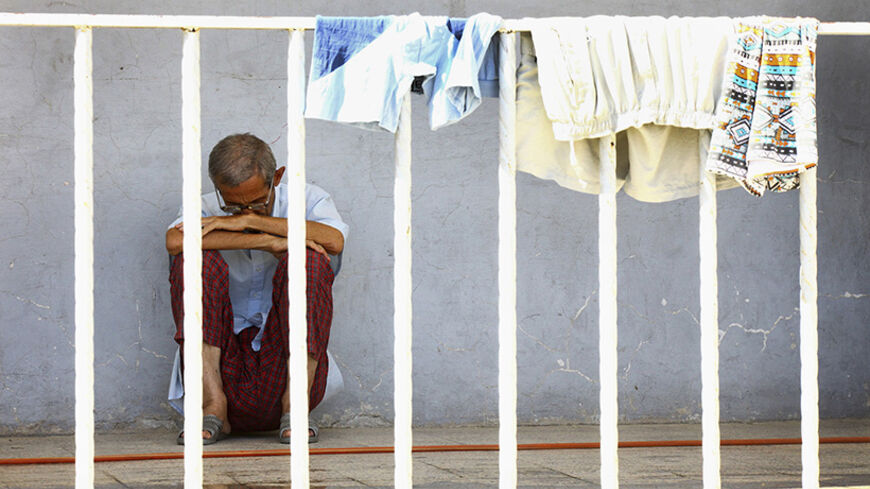 An Iraqi Christian man who fled the violence in the Iraqi city of Mosul sits inside the Sacred Heart of Jesus Chaldean Church in Telkaif near Mosul, July 20, 2014. - REUTERS

ERBIL, Iraq — When fighters from the extremist Sunni groups led by the Islamic State of Iraq and al-Sham (ISIS) rolled into the northern Iraqi city of Mosul on June 10, Rami and his extended family in the al-Arabi neighborhood were rattled and frightened. Despite fears about what might happen to them under the victorious jihadists, they decided to stay, unlike many others who left.

“We, as Christians, were in Mosul for generations,” said Rami, now in the basement of the Um Nour Church in the Christian-dominated district of Ankawa, in northern Erbil, the capital of Iraqi Kurdistan. “Our ancestors lived there for hundreds of years. It wasn’t easy to leave.”

Their worst fears were for a while allayed, as the militants did not initially resort to scare tactics. Accounts by a number of recently displaced Christians paint a picture of a tactically tolerant Islamic State (IS) at the beginning, but gradually changing its behavior and adopting harsher practices.

“At first, the fighters said they had orders not to do anything against Christians,” said the 50-year-old Rami, sounding disappointed and angry. “They handed out green sheets containing their beliefs. They said they believed in Jesus as a prophet. … That way they made us feel safe, but then they deceived us.”

The Syriac Orthodox church where Rami spoke to Al-Monitor now shelters 36 families of the same denomination who fled from nearby Mosul before the end of an IS ultimatum set to expire July 19 — Christians had to pay a religious protection tax (“jaziya,” imposed on non-Muslim minorities), convert to Islam, leave the city or face death.

The Christians with whom Al-Monitor spoke said the jihadists made an effort to present a positive image from June 10 until the end of the month. When ISIS declared a caliphate on June 29 and changed its name to the Islamic State, however, the group started imposing its signature draconian Sharia rules on all of Mosul's inhabitants.

“It was normal for some time. We lived with them. One of their fighters once got into my cab. When he wanted to pay, I refused to take the payment [out of politeness], but he did not accept and paid,” said Rami, who left behind two cars and two houses. “But when they founded the caliphate, they changed, and everyone saw they started imposing more restrictions.”

Conditions were particularly difficult for women. Rami’s sister, Zina, says she did not leave her home after IS militants set foot in the city. “We women, especially, got more scared after the nuns were kidnapped,” said the 40-year-old mother of three. “We did not know what was going to happen to the rest of us.” In late June, IS militants had kidnapped two nuns and three other Christians, before releasing them in mid-July. IS fighters also reportedly seized more than $400 million in cash from Mosul banks, enabling the group to attempt to run the city.

According to accounts by displaced Christians, the jihadists managed to provide intermittent electricity and water services and regulated traffic at intersections. In an attempt likely devised to win hearts and minds, they even provided free public transportation at times. For local Christians, however, everything began to change dramatically around July 14, with a campaign to identify Christian properties. IS fighters painted the letter “N” for “Nasrani” (Arabic for “Christian”) on properties owned by Christians and designated them as the “Islamic State’s estate.”

“We were very angry and felt helpless,” said Um Zaki, a 55-year-old mother of three. “Based on their initial behavior, we did not anticipate this.”

It is difficult to obtain an accurate count of how many Christians were left by the time IS issued its ultimatum, but Al-Monitor's Lebanon Pulse said as many as 17,000 were still in the city, with only 20 remaining by the end of the ultimatum period, noon on July 19. Even then, it was not so easy to leave.

“They stopped us at the checkpoint and took everything we had,” said Zina, visibly upset as she recalled what had happened. “They took everything we had obtained over years, from cars to extra clothes, cell phones, jewelry and money.” Um Zaki interjected, “They even searched and emptied our pockets.”

The families in Erbil are traumatized by what happened to them. The lives they had built over the years were destroyed overnight. Now, Mosul is virtually devoid of its Christian population after a presence of nearly two millennia. There is a strong sense of resentment among the displaced Christians in the newly built church in Ankawa.

The basement’s large hall and a series of smaller rooms have been turned into temporary homes for the displaced. Older men and women lie on mattresses spread across the tile-covered floor, while others chat in groups or take care of daily tasks. The Christians said the church and locals have donated sufficient amounts of food and basic needs, such as mattresses and clothes, but what they now need most is a way to make money, as many of them were not allowed by IS to bring money with them.

Amid ongoing attacks on Christians, the community’s leaders are alarmed by the ongoing migration of Christians abroad. Tens of thousands have sought refuge in the Kurdish-controlled region since 2003.

Wearing a thin, fashionable mustache, 26-year-old Haitham Yusef, who studied ceramic art in Mosul, said he sees little hope in Iraq. “If the situation continues as it is, we cannot go back home and will have to move abroad just like many other Iraqis and Christians,” he stated. “Things might be better for us there. We are left with nothing here.”

Yusef's friend Wesam leaned forward on a chair next to him and nodded in agreement. He added, “We cannot stay here in this country,” while staring at the floor. “There is no opportunity for us. There is no future.”

This is exactly the kind of attitude that community leaders in northern Iraq are concerned about — a sense of helplessness and hopelessness that might prompt more Christians, especially the younger generations, to flee. “If there is not going to be proper educational and employment opportunities, young people will all want to leave,” said Father Jebrail Gorgis Toma, who heads a 200-year-old monastery in the Christian-dominated town of Alqosh, around 50 kilometers (31 miles) north of Mosul.

“I tell Christian youths not to be deceived by the appearance of life in the West. I urge them to stay here,” said the Vatican-educated priest in a beseeching tone. “But if the current conditions continue, then they have the right to leave, and no one can blame them.”

In Um Nour, a sense of despair and uncertainty is visible on its new residents’ faces. Many here are struggling to come to terms with what has happened. “We were a fundamental part of Mosul’s fabric and lived with its Muslim community for centuries,” says Rami, still shaking his head in disbelief. “But we are now left like this.”